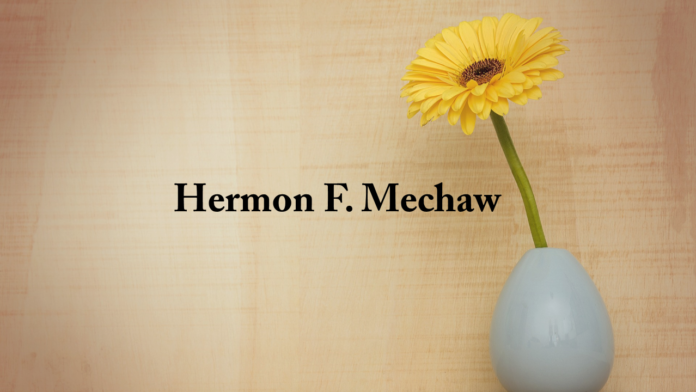 He is survived by his brothers James and Guy Mechaw, nieces and nephews.

He was also predeceased by his loving wife of 60 years Patricia Mary (Bishop) Mechaw. Together they had three daughters, even though he always wanted a boy- Stefanie Olszewski (Douglas), Erica Zahn (Charles), and Jasanne Mechaw. He was thrilled when he had three grandsons- Charles Zahn III, Andrew Zahn. and Ryan Patrick Mechaw (predeceased).

Raised on the family farm in Alabama, he worked hard plowing fields with the mule, picking cotton, plucking chickens, fetching water from the well, churning butter and always enjoyed hunting and fishing. Nothing could fix him up quite like his mom’s homemade cooking after a long day’s work. He loved bluegrass music and a good laugh.

He enlisted into the Army in October 1949 during the Korean War. While at boot camp a general showed up asking for volunteers that were brave, strong and sharpshooters for a special mission… Without hesitating he stepped forward! And off he went to Fairbanks, Alaska to defend the Northwest front. Specializing in heavy artillery, he became a corporal and received a good conduct medal. After the Army he bought a Harley Davidson motorcycle and ready for some warmer weather moved to sunny Florida, where he met his wife, a true New York City girl who fell for his quaint Southern ways and those blue eyes.

He studied hard and became a journeyman electrician and proud member of IBEW 723- initiated in 1958-pensioned in 1995. When Hermon was the foreman of a job, he was strict and by the book, so much so, his fellow electricians nicknamed him “Humpin’ Hermon.” He always made time to help family and friends with his generous kindness and knowledge and will dearly be missed.