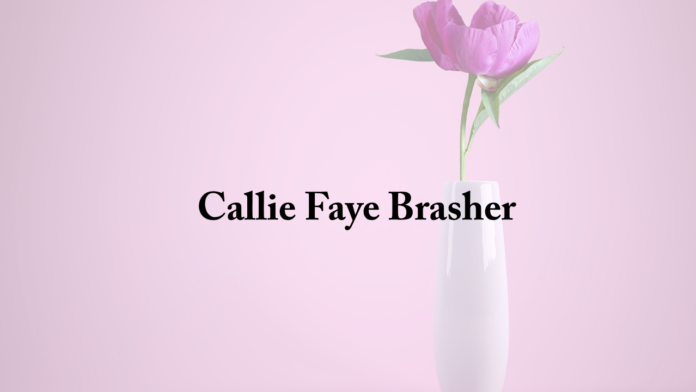 Callie Faye Brasher, 83, of Haleyville, entered into rest Aug. 22, 2019 at her home surrounded by her loving family.

Mrs. Brasher was born July 9, 1936 in Hokes Bluff, Alabama. She lived a life of special service as the wife of Reverend Billy Eugene Brasher for 61 years. Together they ministered at the Cherry Hill Church of God for 46 1/2 years. She was head of the Ladies Auxiliary for at least 25 years, and was responsible for teaching countless children about the Lord as both a Sunday School teacher and VBS teacher. She adored her family and cherished time spent with her children, grandchildren, and great-grandchildren.

Visitation will be held Sunday, Aug. 25, 2019 from 4-7 p.m. at Cherry Hill Church of God in Haleyville. Funeral services will be Monday, Aug. 26 at the Church, where she will lie in state from noon until 1 p.m., with services to begin at 1 p.m. Brother T.J. Milligan, Brother Royce Brimer, and Brother Butch Davis will officiate. Burial will be in the adjoining Church cemetery.