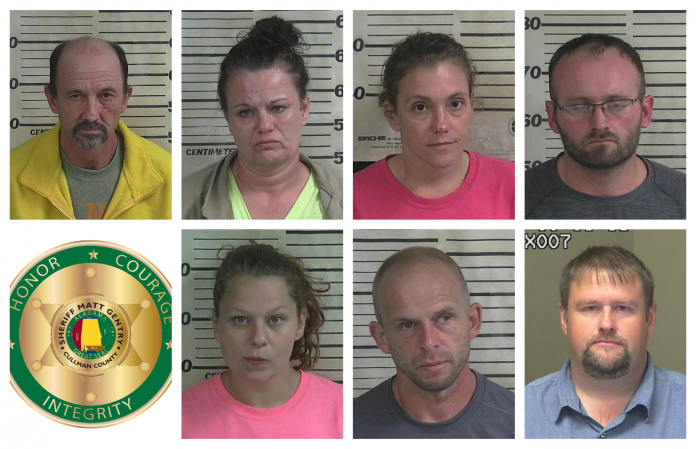 CULLMAN, Ala. – Seven people were arrested in Cullman County on Tuesday in connection with a United States federal grand jury indictment for conspiracy to possess with intent to distribute methamphetamine.

All seven defendants had been previously arrested by the CCSO on related drug-charges. The CCSO said that by it working with the United States Attorney’s Office in the Northern District of Alabama, the Department of Justice adopted the drug cases that CCSO made against these seven defendants.

“These indictments and arrests yesterday were a good day in the fight against drug dealers here in Cullman County.  I can tell you during my 20 years in law enforcement drug dealers do not want to be indicted by the Department of Justice,” said Sheriff Matt Gentry. “I would like to thank the CNET agents, deputies and investigators for not only the job they did yesterday by locating all these defendants again, but also the job they continually here in Cullman County to combat drug dealers.  I would also like to thank USA Jay Town and his office for always being accessible and willing to work with us to get drugs and criminals out of Cullman County.”

"These indictments and arrests represent the hard work of our law enforcement partners, the depth of which continues to grow, and exemplifies our collective efforts to return our neighborhoods to their rightful owners…the law-abiding citizens," United States Attorney for the Northern District of Alabama, Jay E. Town, said.  "For those alpha criminals convicted of federal crimes, the Department of Justice has reserved bed space in federal prison, where there is no sanctuary of parole."