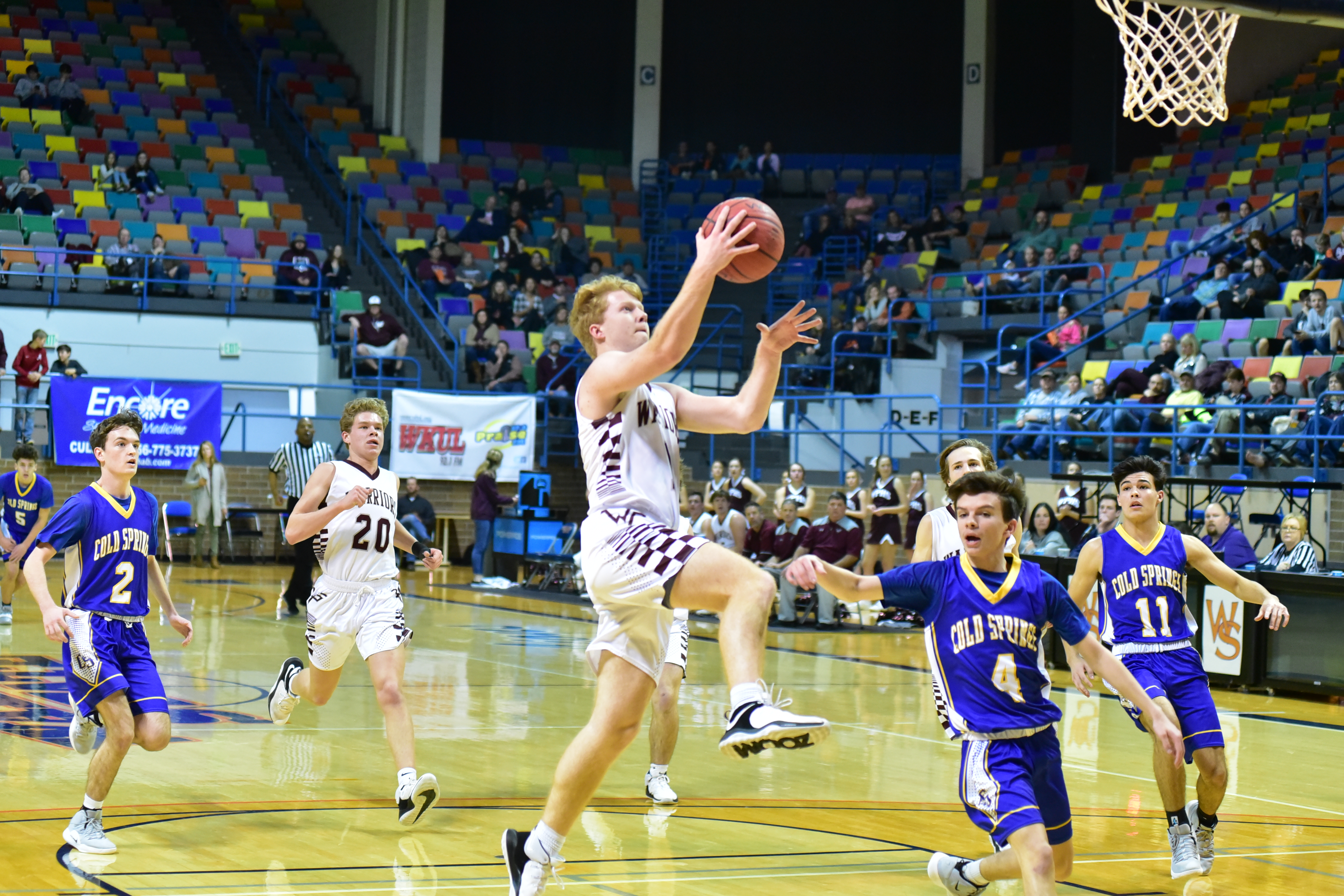 HANCEVILLE – In Tuesday night’s final showdown from the Cullman County Tournament, (3) West Point took on (6) Cold Springs for a chance to advance to a semi-final matchup against the winner of Wednesday night’s game between (2) Hanceville and (7) Vinemont.

Neither team got off to a fast start offensively and the score was locked at five midway through the opening quarter until the Warriors reeled off 10 straight points to go up 15-5 late in the frame. The Eagles were able to add one more basket in the quarter to cut the lead to 15-7 going into the second.

Two free throws from Kolton Sapp stretched the West Point lead to 19-7 midway through the second quarter and Sapp added a three-pointer at the buzzer to give the Warriors a 26-12 lead at the halftime break. Sapp led all scorers with 14 at the half.

Cold Springs began to press West Point in the second half and created some turnovers that they were able to turn into some early third quarter points. Rylan Jones was able to answer for the Warriors with back to back three’s midway through the period to put West Point on top 35-21. Landyn Freeman cut the lead down to 35-29 with a free throw later in the period and Logan Rice made it a 35-32 game with a three-pointer just before the end of the third. The Eagles outscored West Point 20-9 in the frame.

Freeman knocked down two free throws with a little over four minutes to play in the fourth quarter to trim the lead to 37-36. The Eagles took their first lead since the start of the game 40-39 after Mason Harris converted an and-one play with just over a minute to play but Tyler White responded with a basket on the other end to put the Warriors back in front 41-40.

Cold Springs got the lead back 42-41 after Freeman generated a steal and hit two free throws with less than 30 seconds to play. Tyler Thompson then went to the free throw line for West Point with 10 seconds to play and made both to put the Warriors back in front 43-42. Cold Springs turned the ball over on their ensuing possession and Sapp went to the free throw line with seven seconds remaining. Sapp nailed both from the charity stripe and West Point led by three with just a few seconds to play. The Eagles got one more look at a three-pointer to tie it but couldn’t get it to fall and the Warriors held on to win it 45-42.

Sapp led the Warriors with 18 points, followed by Thompson with nine points and Jones with six. For Cold Springs, Freeman led the way with 21 points and Harris finished behind him with eight.

West Point will be back on the floor Friday night at 7:30 to face the winner of (2) Hanceville vs. (7) Vinemont for a chance to play in this year’s varsity boys’ championship game.