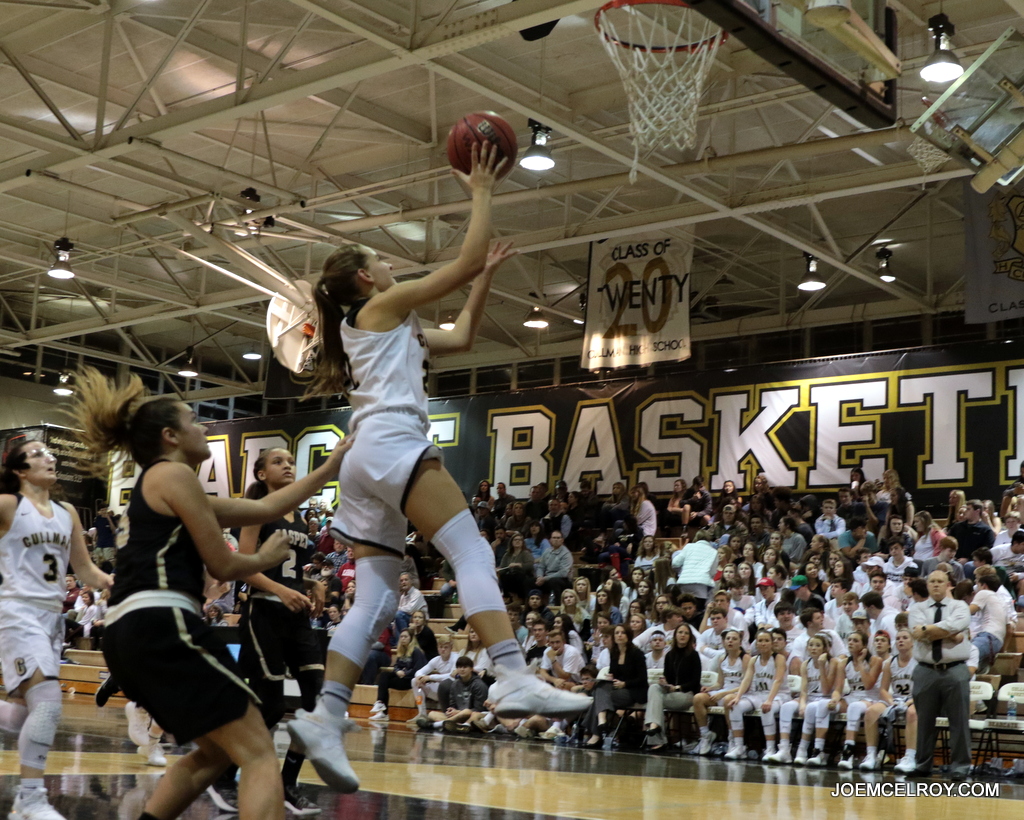 Hannah Hoffman drives to the basket for two points in the Lady Bearcats' 60-21 win over Jasper. (Joe McElroy for The Cullman Tribune)

CULLMAN – The Jasper Vikings made the trip to Cullman High School Friday night and the Bearcats sent both Viking squads home with losses. The Lady Bearcats cruised past Jasper 60-21 while the boys handled the Vikings 72-58.

Cullman's defense swarmed Jasper's offense, forcing 18 turnovers and the entire ‘Cats roster scored at least two points in the game as they rolled past Jasper easily to improve to 8-1 overall.

A.K. Eastman led the way for Cullman with 12 points, three rebounds and three steals. Regan Quattlebaum finished with 10 points and nine rebounds, Olivia Neal added seven points and four steals, Anna Murphy ended up with three steals, as did Jaden Winfrey, and Hannah Hoffman added a pair of steals. The Lady Bearcats will take on Haleyville next Monday night at home.

Cullman overcame a slow start in the game to pull away from Jasper and pick up win number eight on the season.

Three free throws by Jayden Sullins and one by J.T. White gave Cullman a 4-2 lead as the Bearcats started out slow offensively, but quickly picked it up after Jaden Orr nailed a three, later followed by a Tucker Gambrill trey. Sullins added another free throw and the Bearcats stretched their lead to 11-2. Sullins scored 10 of his 17 points in the first period and Cullman held a 19-10 lead after one.

A Cooper Beck layup pushed the Bearcat lead to 28-16 in the second quarter and they kept the pressure on, scoring seven in a row to make it 35-16. Cullman took a 40-24 lead into the locker rooms. There were 29 fouls in the first half, plus two technical fouls on the Vikings. There was one more in the fourth period as Cullman took advantage of some sloppy play by Jasper. The Bearcats pushed their lead up to 24 at one point in the second half as they went on to win 72-58 and to improve to 8-1 overall.

Sullins added four rebounds and four steals in the game to go with his team-high 17 points. All but one Bearcat player found the scoring column. Noah Bussman finished with nine points, as did Gambrill, and J.D. Parrish added eight points. Cullman will look to extend its five-game winning streak to six next Monday night when they take on Haleyville at home.

BREMEN – The Cold Springs Eagles hosted Holly Pond Friday night and the home team came away with a sweep of the visiting Broncos. The Lady Eagles defeated Holly Pond 43-27 behind a big performance from Elizabeth Hill and Landyn Freeman's 24 points lifted the Eagles over the Broncos 67-53.

The Cold Springs Lady Eagles led a close first half against the visiting Holly Pond Lady Broncos, outscoring their opponents by a mere three points, 23-20. Elizabeth Hill led the Lady Eagles in the first half with 10 points followed by a pair of threes made by Toni West to give her six. Kirsten Campbell led the Lady Broncos at the half with six points followed by Maddie Heatherly with four.

The Lady Eagles came out in the second half on a roll, outscoring the Lady Broncos 12-3 in the third quarter and again 8-4 in the fourth quarter to seal the 43-27 win. Hill led the Lady Eagles with 25 points, West finished with eight and Camryn Crider and Neely Ellison tossed in four each. Heatherly led the Broncos with 11 points, Kirsten Campbell had six and Maddi Ham contributed five

The Eagles led the first half 38-28 over the Broncos after senior Landyn Freeman posted 12 points, Adam Hill added eight and Brody Peppers recorded seven. Kyler Chaney led the Broncos in the first half with nine points followed by Tyler Boatright with six.

The Eagles caught fire in the second half and pulled away from the Broncos to win it 67-53. Freeman led the Eagles with 24 points followed by Hill with 13. Boatright and Chaney led the Broncos with 12 points each and Isaac Ludwig tossed in nine of his own.

Cold Springs will be back on the floor when they travel to play West Point Dec. 4 and the Broncos will host Randolph the same day.