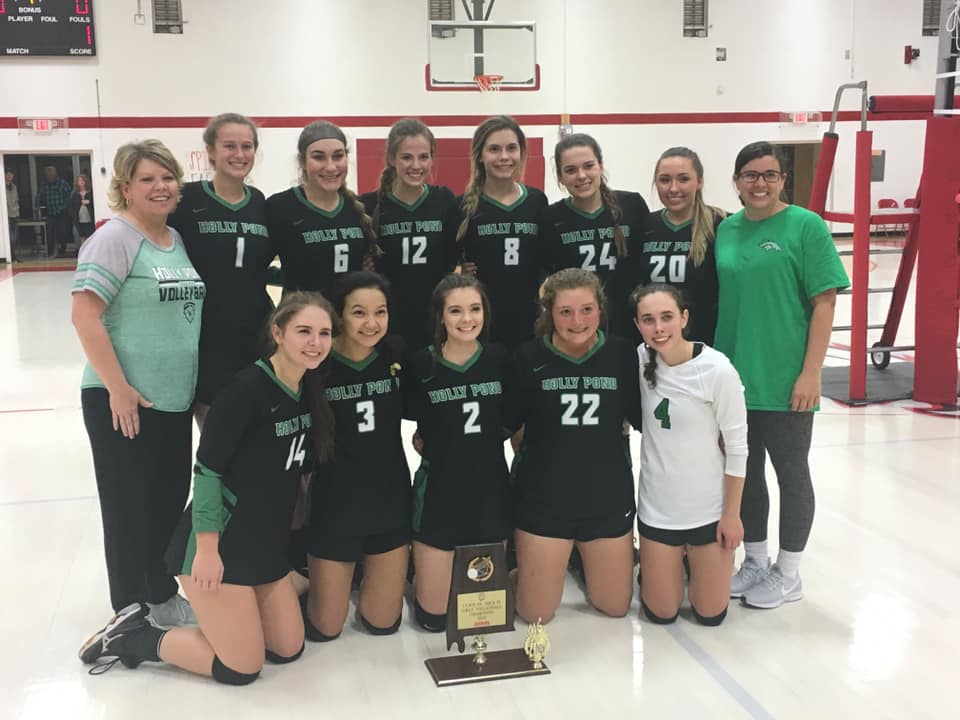 The Holly Pond Lady Broncos defeated Vinemont in four sets to claim the 3A, Area 13 title. Holly Pond and Vinemont both advance to the North Regional this Thursday. (Nick Griffin for The Cullman Tribune)

It was a big night for the Lady Broncos. After playing some of the best volleyball they’ve played all season, they were crowned the 3A, Area 13 champions. The Lady Broncos dominated East Lawrence in three sets to advance to the championship match against the hosting Vinemont Lady Eagles. Holly Pond quickly got on top of the Lady Eagles by two sets, but Vinemont was able to bounce back and win the third set to stay alive. The Lady Broncos put it away for good in the fourth set and knocked off the top-seeded Lady Eagles to claim the area crown.

After the match, Holly Pond Head Coach Emily Brown talked about the keys to her team playing so well on Monday night.

“It was playing relaxed and just coming together as a team in general. We played Saturday and decided after that tournament that we were going to put everything into this,” Brown said. “It was all in or nothing and they showed up to play and I couldn’t be prouder of them.”

The Lady Broncos seem to be hitting their stride at the right time and Brown is excited to see if they can ride this momentum even further.

“This is a great time to peak. It doesn’t matter what you did all season now, this is all that matters, so hopefully we can put it together at the right time.”

Tess Duke was the standout for Holly Pond, racking up 14 kills and six aces in the championship match. Makenna Folds and Madison Heatherly also had big nights for the Lady Broncos. Folds posted 12 kills in the match while Heatherly added another 10.

Holly Pond and Vinemont both advanced to play in the North Regional Tournament in the South Hall of the Von Braun Center in Huntsville on Thursday. The Lady Broncos will be on the court at 9 a.m. and the Lady Eagles will play at 10:15 a.m.

The Lady Bulldogs took on Sulligent to start out the day and dominated game one. After Sulligent took a 2-1 lead, the squad’s only lead of the day, the Lady Bulldogs reeled off 13 straight points to take complete control of the contest as they rolled to a 25-10 win to go up 1-0. Tessa Alvis led the way with six aces and three kills for Addison. Savannah Manley added five kills. Brieanna Ory added a pair of aces. Macey Butler ended up with an ace, a pair of assists, and a dig. Addisyn Smothers finished with two kills. Destiny Walker added three digs. Callie Crider finished with a kill, and Natalie Jefferson finished with three assists.

In game two, the Lady Bulldogs jumped out to a quick 7-1 lead behind a pair of kills and aces by Alvis, two assists by Butler and a Sunny Snoddy kill. They increased their lead to 16-6 as Butler assisted on an Alvis kill. Addison went on to take the second game, 25-10, one win away from moving on to the championship game. Alvis finished with six kills and four aces in game two. Ory added a pair of aces. Butler finished with five assists and a point. Jefferson added three assists. Crider ended up with a pair of kills and a point. Walker (ace) and Sarah Parris each added a dig.

Addison faced off against Winston County in the Class 2A, Area 13 championship game, looking to add yet another championship trophy to its case.

The first game featured some big runs and some back-and-forth action. Addison jumped out to a quick 5-3 lead as Jefferson assisted Alvis on the play. Winston County scored the next six points to take a 9-5 lead, but the Lady Bulldogs countered with a big run as 10 straight points put them back in the lead at 15-9. It was back-and-forth after that; the lead never got bigger than six the rest of the way until Addison finished off the game on  a kill from Alvis and an ace from Gracie Manley to win game one, 25-18.

Alvis continued her strong day as she finished with eight kills and a point. Butler added four assists and an ace. Jefferson ended up with three assists of her own. Gracie Manley added three aces. Crider finished with four points, a kill and a dig. Ory had two digs, while Walker and Smother each added a dig.

Game two started out bad for the Lady Bulldogs as they quickly fell behind 3-1, but they quickly took the lead in a game that was close for a little while. Then, Addison went on another big run scoring eight in a row to turn a 7-6 lead into a 15-6 advantage as they went on to take the game, 25-12, to take a 2-0 series lead heading into game three.

Game three saw the Lady Bulldogs jump out to a quick 9-1 lead. But later on, the Lady Yellow Jackets cut into their lead and trailed by just one at 14-13 and later took a 16-15 lead. It went back and forth for a little bit until Addison made its final run of the game, breaking an 18-all tie by getting seven of the final eight points, including the championship-clinching point as Butler assisted Alvis on a kill.

Addison advanced to the North Regional Tournament and will play in the South Hall of the Von Braun Center in Huntsville on Thursday.

The no. 1 seed Cold Springs Lady Eagles (33-9, 7-0) walked away area champions Monday night to kick start off their post-season play.

Cold Springs took the floor to begin the evening facing the Cleveland Panthers without senior libero Kinley Campbell due to unforeseen health issues prior to the game. However, the Lady Eagles would not go down without a fight outlasting their opponents (25-18, 25-16, 25-7) to advance to the championship game.

Both Cold Springs and Southeastern advanced to the North Regional in Huntsville. The Lady Eagles will play at 12:45 on Thursday.

Hartselle and Cullman advance to North Regional in Huntsville; Decatur was eliminated. The Lady Bearcats will play Thursday at 2 p.m.

Lawrence County and West Point advance to North Regional in Huntsville; Hamilton and Russellville were eliminated. The Lady Warriors will play Thursday at 10:15 a.m.