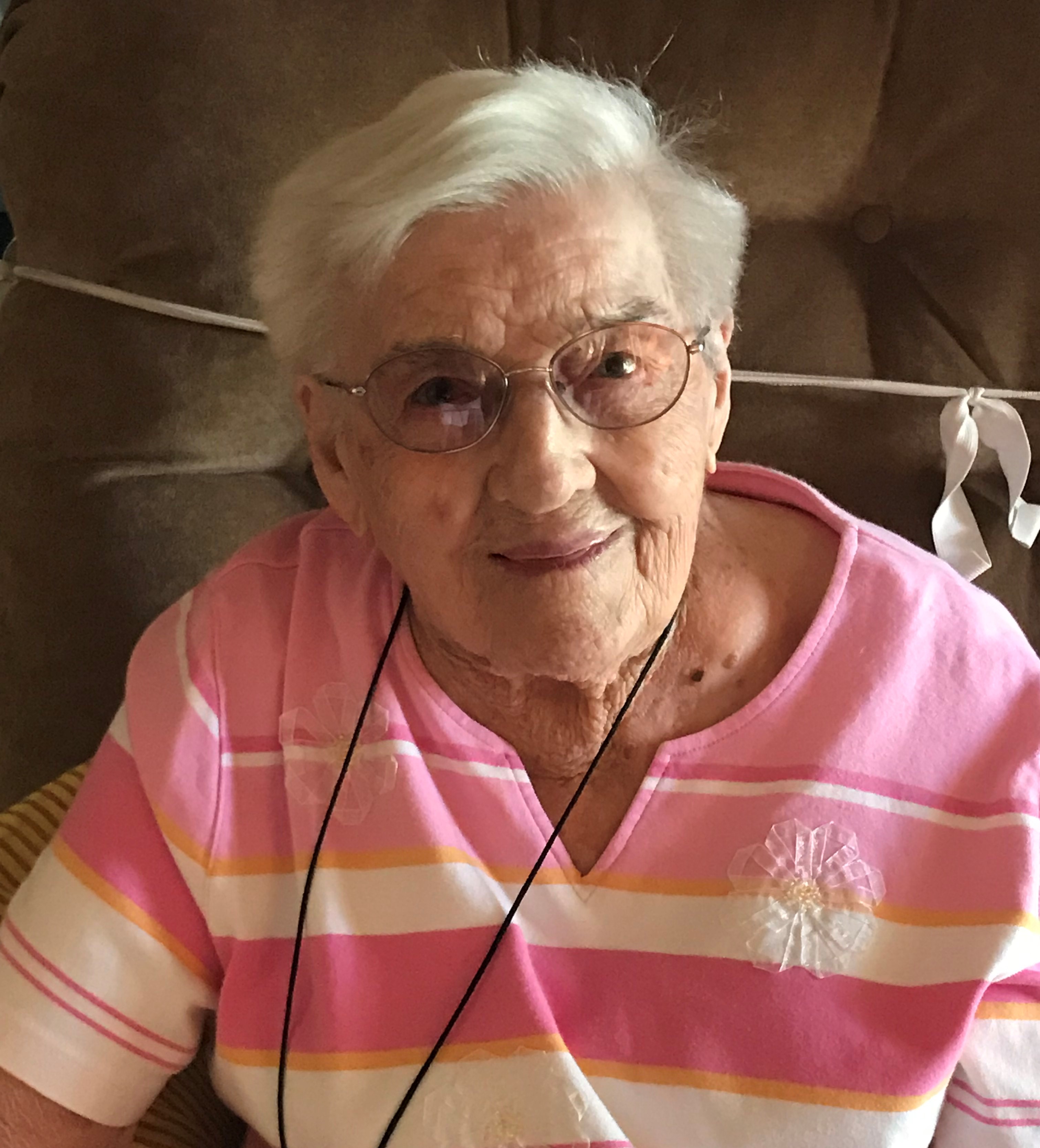 On Oct. 24, Mrs. Wynell Ray Lee will celebrate her 100th birthday! She still lives at home next door to her childhood home and has many fond memories of her years growing up in the Providence community.

Her parents, John and Gertie Ray, made a living as farmers and had four children, including Wynell. Wynell’s only sister, Jeanelle, died as an infant, leaving Wynell with two brothers to pal around with. The family grew potatoes, strawberries, cotton and other crops depending on the season. Her daddy would take the truck to markets to sell the vegetables.

Wynell remembers her childhood fondly with the exception of digging up potatoes.

She and her brothers would often compete when working in the fields, she shared, “We were paid by the pound of cotton. It was best to pick early in the morning when the cotton was still wet. I picked 300 pounds of cotton in one day. That was my record. We had to make a game out of it so there would be some fun to it.”

The family was self-sufficient. They grew their own vegetables and raised hogs and cows. They milked cows and made their own butter.

Wynell and her brothers (Ferrell and Jack) did have fun when they weren’t working on the farm.

She recalled, “We made truck wagons. We would clear the hillside and start at the top. A truck wagon was four wheels with a wooden plank down the center to sit on. We tied ropes to the front wheels for steering. We were so silly! We would make stop signs on our course down the hill. Guess what we didn’t have? BRAKES!!”

She laughed as she explained that brakes were hoping your feet would stop the wagon.

“Oh, we had so much fun!! Back then we didn’t have nothing but what you made to play with. Our favorite thing was a big tree on top of the hill. It was by the water and we loved swinging on the muscadine vines in the tree. We would swing around and out into the water. We also took an old chain and tied it up in that tree. We would swing around and around. One day my brother, Ferrell, swung around and into the tree, breaking his arm. Lord, Daddy was so mad! He went straight to that tree and chopped it down.”

Wynell recalled a story from when she was 12 years old: “One year we had a big snow and a big crowd of snow ballers went out to play. I wanted to go so bad, but I only had on a little pair of slippers on my feet. So I went snowballing in my slippers. I ended up catching pneumonia. We made lots of snowmen. We would attach corn cobs to sticks so it looked like they were smoking,” she laughed.

Wynell attended Providence School. She said that the small school only had four rooms. The kids would attend high school at Eva High School, but Wynell never finished school. Sadly, her brother Ferrell, who had a heart condition, passed away three days shy of his 17th birthday.

Wynell married for the first time at the age of 16. Two years later, she said, “I got mad and just went back home.”

When Wynell was around 20 years old she went to a singin’ with a friend. Her friend had a boyfriend and he had a friend named Ithel Lee. Wynell and Ithel started dating and eventually married. Ithel was in the U.S. Navy.

Ithel Lee was serving on the U.S.S. Wasp during World War II and in 1942 the ship was attacked by the Japanese. The ship sank, and 193 men lost their lives. Ithel Lee survived and was then sent to San Diego. Young Wynell would join her husband in California. Scared to death, Wynell boarded her first train headed for California.

She said, “I thought we would never get there! I took the L&N Railroad and we missed our connection in Yuma, Arizona and ended up in Los Angeles. We then took the Southern Pacific Railroad to San Diego. We were 11 hours late.”

As she finally arrived in San Diego, she didn’t see her husband and she thought, “What in the world am I going to do?” Ithel had met every train at the station that day. He wasn’t expecting her to be coming from Los Angeles on a different railroad company.

She said, “I finally looked up and saw Ithel pacing frantically and he finally saw me. Ithel said to me, ‘Lord have mercy! Where have you been???’”

As the young couple got settled in San Diego, Wynell saw and experienced a very different world than what she had known in Providence, Alabama.

Two things she especially remembers: “There was no lightning and thunder. Just rain. Also, buses! They had buses that could take you everywhere.”

Wynell found work at Woolworths working the counters and floor.

She laughed, “They loved my Southern accent! They were always asking me where I was from. Florida? Georgia? I would never tell them. One day as I was getting to work, it had rained and there was a great big puddle of water. Woolworths was kind of in a hole, so I wasn’t sure how I was going to get around it to the door. Suddenly this sailor came over and picked me up, carried me through the puddle and sat me down at the door. He told me to have a good day and off he went. Can you believe that?”

After three years in San Diego, Ithel and Wynell returned to Cullman. They had a house built next door to Wynell’s childhood home. They had three children: Ronnie, Janice and Terry. In the early 1950s the family moved to Michigan, as many did, to work for Ford Motor Company. Ithel worked while Wynell stayed home with the children.

After a short time in Michigan, the Lees returned to Providence. Wynell still lives in the home she and Ithel had built next to the old house. Wynell’s youngest son Terry has renovated the old house and lives next to his mother. Wynell’s daughter Janice also lives nearby. Ithel Lee passed away in 1968. Wynell’s brother Jack passed in 1995 and her oldest son Ronnie passed away in 2011.

According to Wynell’s daughter Janice, her mother lives for Bama’s first game every year and is very excited about her 100th birthday saying, “She’s talked about it all year!”