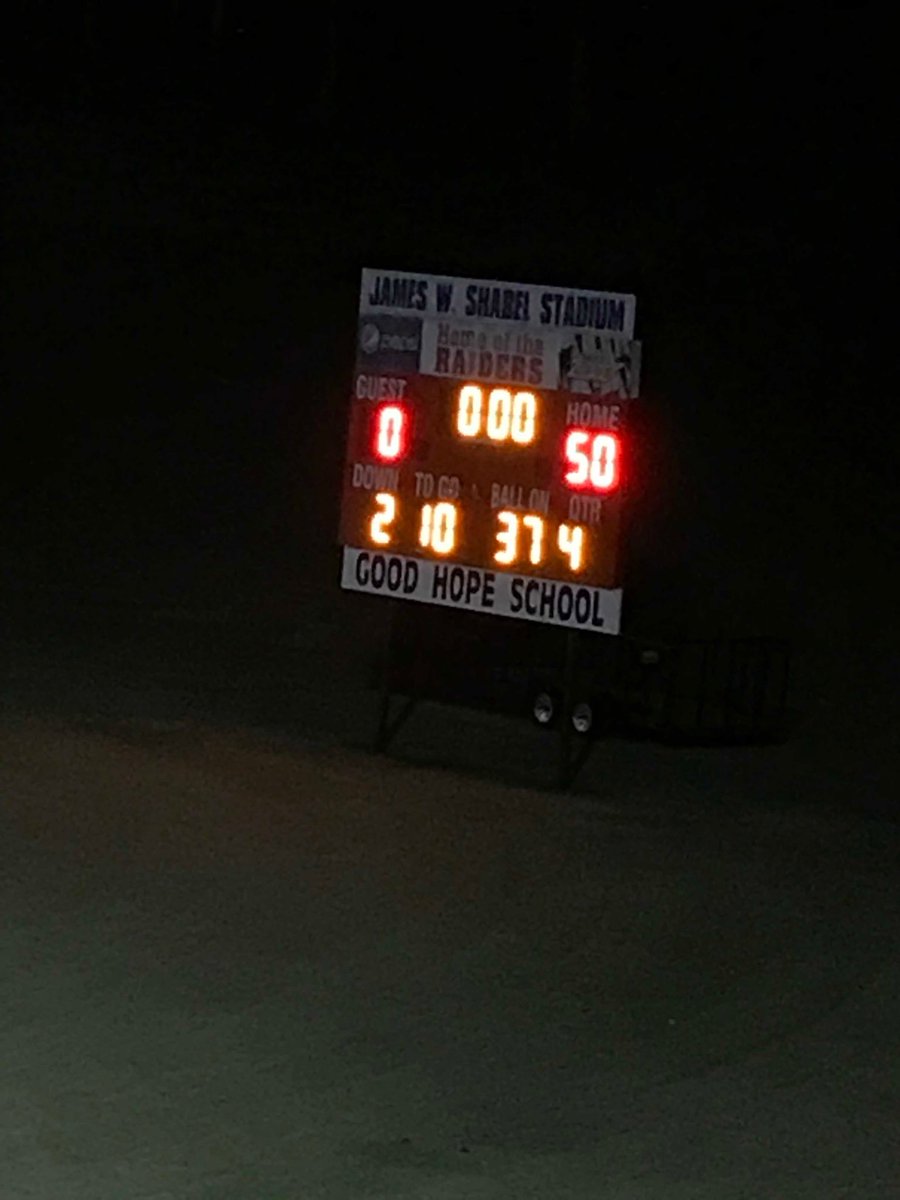 GOOD HOPE – Domination. That is exactly what the fans inside James Shabel Stadium witnessed as Good Hope (Class 4A, Region 5) dismantled the struggling Oak Grove Tigers (Class 4A, Region 5) on its way to a one-sided 50-0 victory. With the win, Good Hope improves to 5-0 overall and 2-0 in region play. The clock hasn't struck midnight yet on this Cinderella season.

Good Hope started the game on the arm of Bailey Quick and continued with a pass-heavy attack throughout its first possession. Quick came out firing and went 5 for 5 for 60 yards, driving the Raiders down to the 19-yard line. The 10-play, 72-yard drive was capped off by a 2-yard run from Austin Knight that put the Raiders on the board.

The Raider defense started a bit sluggish on Oak Grove's first offensive outing, allowing a very nice 29-yard run to give the Tigers some hope, but the Raiders quickly gathered themselves for a tough fourth-down stop, allowing the offense to take over on downs. Unfortunately, the sluggishness continued for both teams with Good Hope going three-and-out and Oak Grove not fairing much better on its next few possessions.

Halfway through the second quarter, the Good Hope run game, led by Matt Dixon and Quick, took over and the Raiders marched 80 yards in six plays to extend their lead to 14-0 before halftime.

Whatever Coach Alan Scott and the rest of the Raider coaching staff told their team at halftime, it worked. Wow, did it work.

The third quarter saw a completely different Good Hope team emerge from the locker room. The swagger was back, and you could feel the change coming. Oak Grove received the kickoff and the Raider defense made its presence known, only allowing the Tigers 4 yards to start the second half. The Raider offense took over and after an offsides call on Oak Grove, Quick found Preston Bagwell for a beautiful 29-yard touchdown strike. On the ensuing extra point attempt, Coach Scott showed a little razzle dazzle calling Bagwell to fake the kick for an end around score for the 2-point conversion and a 22-0 lead.

From this point forward, it was all Good Hope. The struggling Tigers were outmanned and outgunned. The Raider defense was on point to make a statement. That statement in the form of Tanner Malin, who made a quick step on a ball, grabbed the interception and proceeded to take it 56 yards on the pick-six, putting the Raiders up 29-0.

Oak Grove was never able to put together any offensive output nor any defensive stops. Good Hope scored at will over the next three possessions with touchdowns by Quick, Colton Bagwell and Malin. The Raiders proceeded to run the clock out for the win.

The Good Hope Raider defense was absolutely relentless all second half, in the backfield on, what seemed to be, every single play. The Raider ground game, led by Dixon and others, was brutal, powerful and overwhelming from the start. The winless Tigers from Jefferson County fall to 0-5 for the year.

The Raiders have a much-deserved off week next week, but the schedule gets beefy from then on as they travel to Northside Oct.  5 for a big region play matchup.

Note from the writer: “If you haven't had a chance to come out and watch a game this year, I urge you to make it a priority. The product on the field is top-notch, the band is absolutely rocking it out and the cheerleaders are giving it their all. The environment itself is worth the price of admission. Get out and support your local school because these kids are working hard for you. Give it a shot and you might just have a good time and find yourself saying, ‘Go Raiders.’”