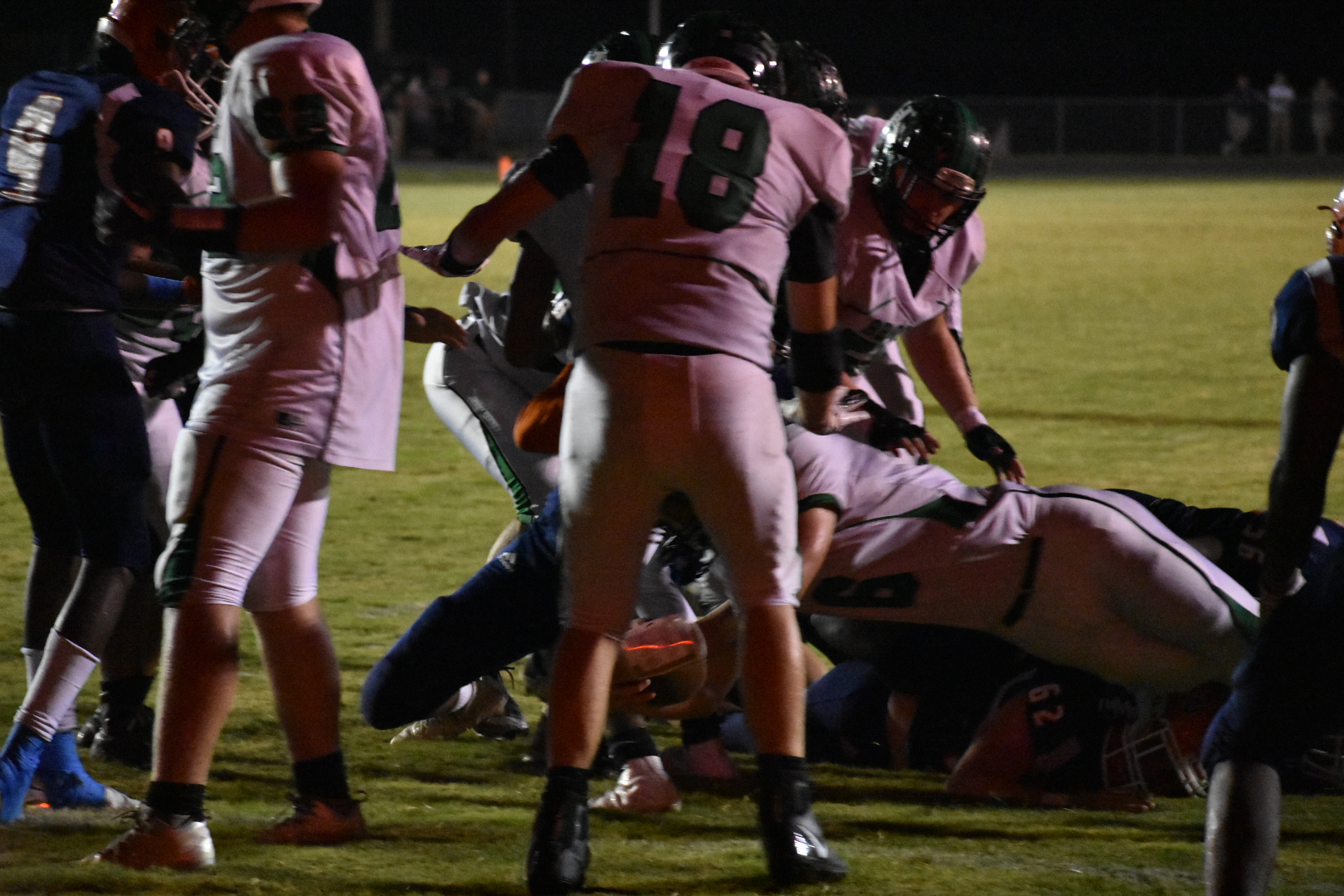 Holly Pond’s Brody Rowell (6) breaks the plane for the Broncos’ lone score of the night against the Fultondale Wildcats. (W.C. Mann for The Cullman Tribune)

FULTONDALE – Holly Pond, coming off its convincing 22-6 win over Hanceville last week, had the favor returned by Fultondale Friday night with a 23-6 loss in the away game.

The Broncos started in a short series that netted only 11 yards before a short punt handed the Wildcats the ball at their own 37.  They drove into Holly Pond territory, but then got chased around the backfield for a 30-yard sack. Fultondale recovered its footing, though, and drove to the red zone before stalling and settling for a field goal to put the first points on the board. Holly Pond’s ensuing series was a three-and-out, and the Broncos watched the Wildcats return the following punt for a touchdown to go up 10-0 at the end of the first quarter.

The Broncos started the second quarter on their own 25-yard line and went three-and-out again. Fultondale drove fast into Bronco territory to score another touchdown and add to its early lead. Holly Pond managed a first down on the first play of its next series, but that was all and after a punt pinned the Wildcats on their own 10, they managed to drive back into Bronco territory. Holly Pond got a little encouragement when a big sack resulted in a huge Fultondale loss.  A punt gave Holly Pond the ball back. Two Wildcat penalties helped the Broncos drive across the 50, but they couldn’t capitalize on the Wildcats’ mistakes, turning the ball over on downs in Fultondale territory. The Wildcats threatened again, but a stalled red zone drive ended with a missed field goal, making it 16-0 Fultondale at the half.

The Wildcats started the third with the ball, but two holding penalties and a personal foul on three consecutive plays backed them way up.  They managed to get most of that back, but still ended up fourth-and-long. A fake punt attempt led to yet another match of backfield tag, and Fultondale handed the ball over on downs after a 30-yard loss.  Holly Pond started just outside the Wildcat red zone, but just couldn’t move on offense, turning the ball over on downs. Fultondale then drove the field convincingly, tacking on another touchdown to go up 23-0 at the end of the third quarter.

The fourth quarter opened with the Broncos again enjoying good field position at midfield.  They drove close to the red zone but gave up a fumble at Fultondale’s 24. The teams then traded punts. When a Wildcat fumble gave the Broncos the ball on the Fultondale 45, Holly Pond came to life. A long catch by Isaac Ludwig, accompanied by a Wildcat facemask on the tackle, may have been the Bronco highlight of the night, leading to the only Holly Pond score of the game a few plays later, when Brody Rowell took it in for the touchdown, making the final score 23-6, Fultondale.

Holly Pond, now 3-2, will be back at home next week as the Broncos look to bounce back for their showdown with the Danville Hawks.