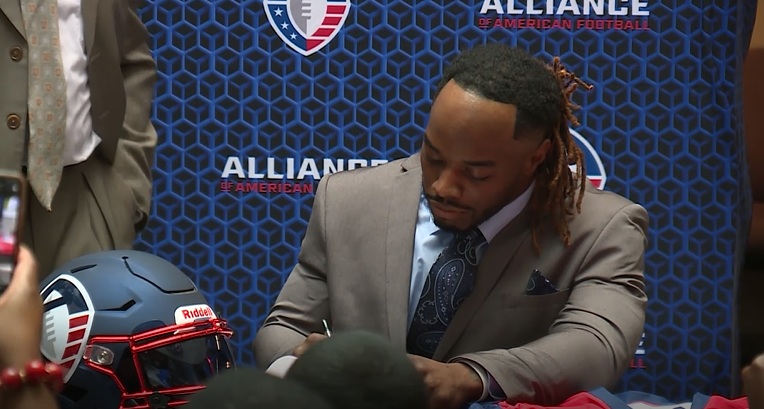 Trent Richardson signs with the Alliance Birmingham in the new Alliance of American Football league on Aug. 29, 2018 (Courtesy of WVTM 13)

VINEMONT – With a little help from a Cullman area church, the Vinemont Eagles will have a boost on the sidelines for their homecoming game this Friday, when former Alabama Crimson Tide star and pro running back Trent Richardson comes to spend part of his day at the school.

Pastor Chris Harrison of Church 212 set up the event and will host Richardson.

“I’m the pastor at Church 212 in Cullman, but I am also a Vinemont graduate, and I wanted to do something to help their quarterback club.  And the door opened through an old college friend who now owns a jersey company that signed Trent, and I asked him for a favor for my alma mater. Trent was nice enough to talk with me and do everything that I asked him.”

Richardson, who played in the NFL for the Indianapolis Colts and Cleveland Browns (Richardson was the first-round, third overall pick in 2012), and who just signed with Alliance Birmingham in the new Alliance of American Football league, will get up close and personal with Vinemont’s students and student athletes.

Harrison continued, “He’s going to be at their pep rally, speaking to their football team, letting fans get pictures and signing autographs, selling some of his items and donating some proceeds from every sale to the QB club at Vinemont. Then he’s going to hang on the sideline with the coaches and the team for the whole game to cheer the Eagles on.”

According to Harrison, Richardson’s schedule at Vinemont includes:

If his schedule allows, Richardson may return to the sideline to finish the game with the Eagles.

The Eagles will welcome the Hanceville Bulldogs for the game Friday. Kickoff is at 7 p.m.