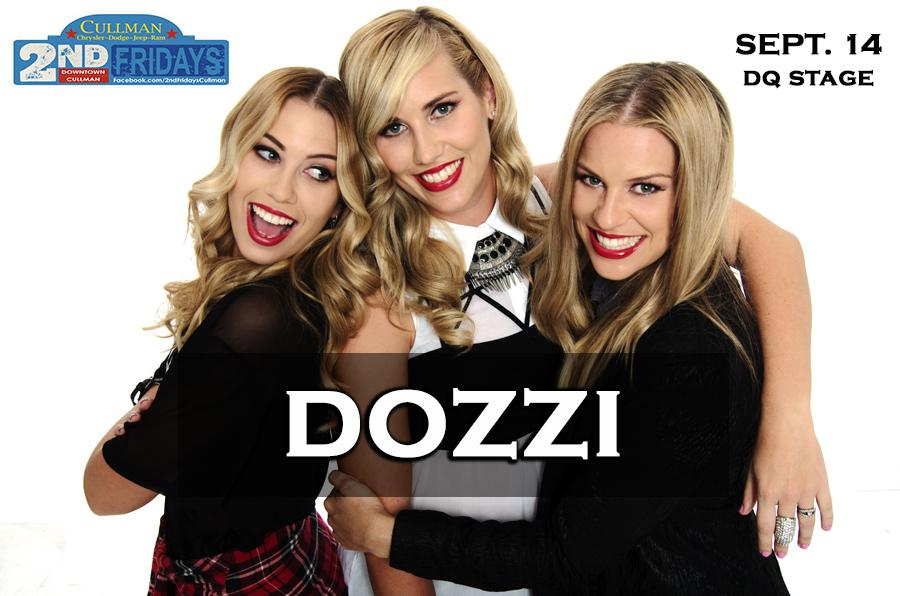 CULLMAN – This Friday, Sept. 14, the Cullman Area Chamber of Commerce will host the last 2nd Friday celebration of the 2018 season, and it’s going big.  An actual sanctioned multi-state cornhole tournament and a free concert by rapidly-rising country trio Dozzi are just part of the picture.

Said the Chamber: “Already a big hit back home in Australia and ready to make the same waves in America, Dozzi will ensure the Dairy Queen Grill & Chill Restaurant Stage stays rockin’ all evening. The sweet-singing sister trio has played alongside popular acts like Lady Antebellum and Big & Rich and can regularly be found performing at a number of Nashville’s hottest country music dives.

“The inaugural Cullman Area 2nd Fridays ‘Fling It Like You Mean It’ Cornhole Tournament will take over Depot Park for September. With winnings of $500, $200 and $100 for the top-three teams, the double-elimination event is expected to draw competitors from all over the region.” (Registration for this event is closed.)

“Usually open to various recreational displays, the R.E. Garrison Trucking, Inc. Show Lot will take on a whole new look for the year’s finale. The ‘2nd Fridays Carnival’ will fill out this bustling area, allowing kids have fun and play the boardwalk-style games set up by several of the area's nonprofit agencies.”

This Friday’s activities also include: live music from Fork In The Road and Cotton Bird, an antique and classic car cruise-In that lines the streets and has begun to overflow into the parking lot adjacent to the Festhalle, the Buffalo Wild Wings Kids Zone, the Cullman County Public Library System Bookmobile, and the U Do It Snow Kone Factory truck, Artist Alley, Farm Y'all Cullman, the Festhalle Farmers’ Market, a food demonstration, extended retail and dining hours at participating Warehouse District and downtown Cullman stores, food trucks and the Cullman County Conservation District's Agventure trailer.

Local charities in focus this month

Each month, the Chamber has employed a special emphasis to spotlight different types of member businesses and organizations.  Boats and RVs, pets and women’s interests have all had their turns.

Chamber President and CEO Leah Bolin told The Tribune, “This month we’re having a ‘Chamber for Charities’ carnival, and that just brings in our Chamber member 501(c)(3)s to have an opportunity to participate in a fun way, and bring, really, the ability for the general public to see what they do, and ways they can get involved in those nonprofits.”

Cullman Downtown Merchants Association stretches the fun down the street

Where the Chamber leaves off at U.S. Highway 278/Third Street Southeast, the Cullman Downtown Merchants Association will pick up and continue the fun south to Fifth Street Southeast with cars from local dealerships, kids’ rides and bounce houses, and live entertainment.  The Overtones will play across from Moe’s, and He & She will perform by Busy Bee. Expect businesses to stay open late, as well.

This year’s 2nd Fridays in review

Bolin shared, “Every year that we’ve had it, for the last four years, it has steadily grown.  But this year, you know, we started out of the gate in June with it just being a huge event, and it has continued to grow each month in succession after that.  It’s hard to estimate when you don’t have ticketed events but looking at the square footage of the festival area and seeing the thickness of the crowd, I’m confident that you’re looking at 10,000 to 15,000 people per event, times four!

“And so, that’s some hefty numbers to get in here for the major purpose of the event, which really is shopping, featuring local food and shopping.  That’s what it’s all about, and that makes all the effort worth it, for sure.”

Bolin said merchant participation in the event is up, both in the number of retailers finding it worth their while to stay open late, and in retail sales totals.

Said Bolin, “I know our store owners–we’ve checked in with several of them periodically throughout the summer–and they’ve had some of their highest sales totals ever.  And so that tickles me, that they’re able to well during the event.

“And then, in addition to just your brick-and-mortars who are open throughout all of the central business district–and this means even the ones that are not in the official event footprint–we have Chamber members who have said that they’re going to stay open.  We have a map printed; anybody that’s walkable in the central business district is on that map so that people can know they’re open and can visit those stores and still take part in the activities that are going on.”

Even businesses located outside the business district have had chances to get in on the action at 2nd Fridays.

Shared Bolin, “We’re always looking for ways, like with our pop-up shops, to give them the ability to be there in the middle of that festival event.  Even if their actual store is not located there, they can pack up and bring a remote store, and do business that way. So, it’s been really exciting to figure out ways to include different members within the footprint of that event, so that they can gain exposure for their business, no matter where it’s at in all of Cullman County.”

2nd Fridays is sponsored by Cullman Chrysler Dodge Jeep Ram and presented by the Cullman Chamber and Cullman Parks, Recreation, & Sports Tourism. Festivities begin at 5 p.m. and carry on in downtown Cullman until 10 p.m. Admission is free, but don’t forget your pocketbook to support area eateries, merchants, vendors, artists and farmers! Attendees are highly encouraged to bring their own chairs as well.