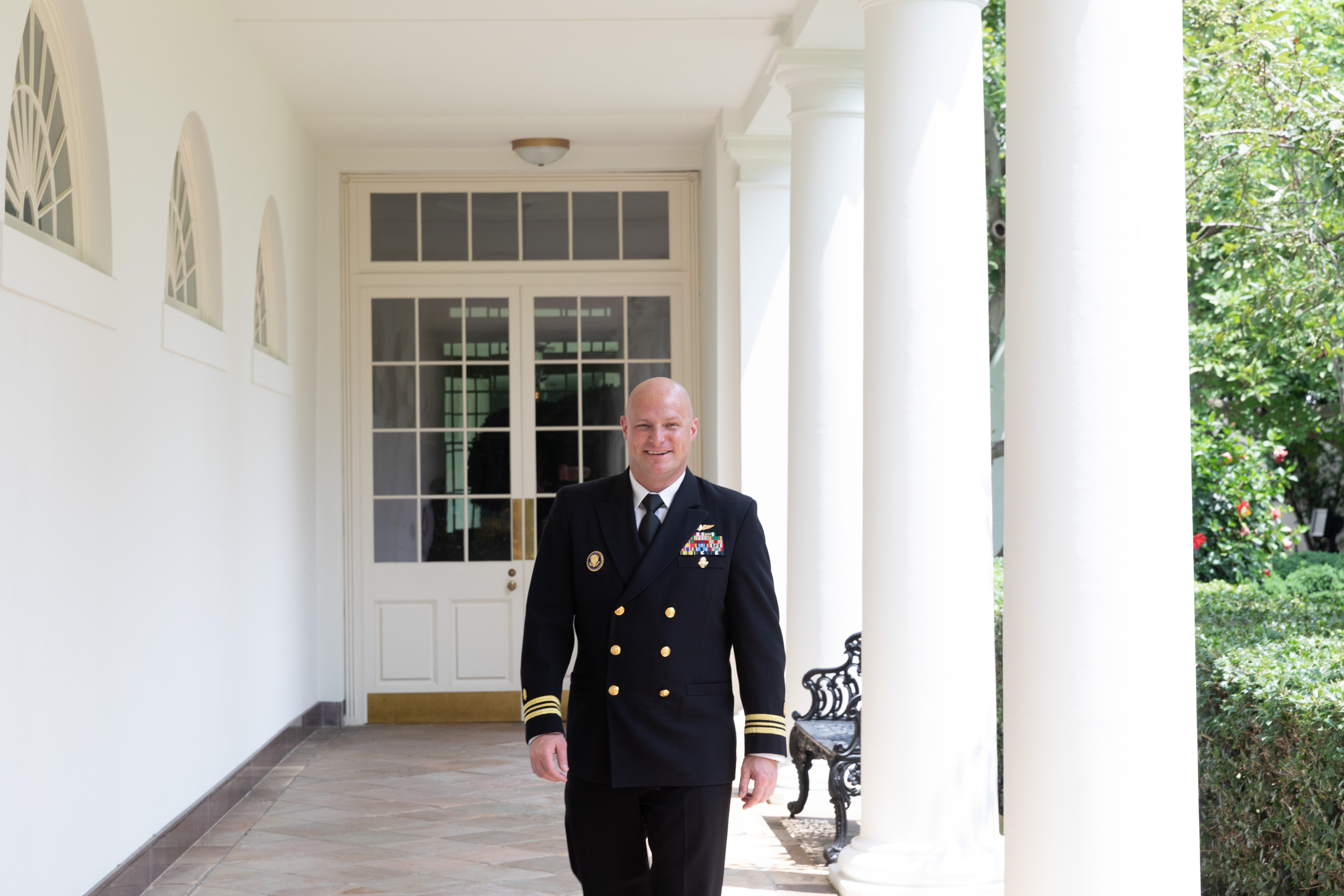 Naval Lieutenant Commander (LCDR) Chris Lynn walks along the West Colonnade, which connects the West Wing to the Residence and is often seen as the backdrop to Rose Garden events at the White House.

HANCEVILLE – U.S. Navy Lieutenant Commander Christopher Lynn, RN, BSN, MBA, CCRN, CEN, has a lot of initials behind his name that help to tell his remarkable story and how he came to be serving on the medical team to the president of the United States.  In many ways, this story begins with the first set of initials, the RN, which he received at Wallace State Community College in Hanceville, Alabama.

Indeed, Lynn’s mother, gave birth to him while attending the nursing program at Wallace State. She is currently an executive director at UCSF Benioff Children’s Hospital in Oakland, California.

A native of Cullman, Alabama, Lynn joined the Marine Corps after completing high school in 1998. He served as a combatant diver and sniper with an elite Marine Reconnaissance team in the 1st Marine Division. Lynn was deployed as a member of an urban sniper team with the 13th Marine Expeditionary Unit in 2000. He led security patrols in the country of East Timor following civil uprising and provided sniper overwatch for the USS Cole during Operation Determined Response immediately following the terrorist attack on the ship.

During his time in action, he had the opportunity to work with corpsmen in the field. He was fascinated by their level of medical knowledge in treating battlefield injuries. It was then his interest in the medical field was ignited. After witnessing the aftermath of the USS Cole bombing, he knew he wanted to save the lives of others contradicting his current position as a Recon Marine where you were more likely to take a life than save one. This led him to pursue a degree in nursing.  “It just felt right,” he said.

Since childhood Lynn had always been around hospitals. Not only at Cullman Regional, where his mother worked, but at Children’s Hospital as a patient.

“When I was a child, my face was badly burned in a house fire, and I had numerous procedures to repair the damage, so I was in and out of Children’s a lot,” Lynn said.

In 2002, then-Sgt. Lynn left the Marine Corps and returned to his hometown where he enrolled in the Associate Degree Nursing program at Wallace State, which he completed in 2005. During his class’ pinning ceremony, he was awarded the Florence Nightingale Award, the highest award given to nursing graduates, which recognizes a commitment to excellence in scholarship and dedication to compassion and exemplary patient care. After graduation, he worked full time in the emergency department at Cullman Regional, where his mother had worked for many years, while completing his Bachelor of Arts in Nursing at the University of Alabama Huntsville. During this time our nation was heavily engaged in combat in Iraq and Afghanistan.

“Coverage of Marines being injured was all over the news, and I could not sit idle as my brothers were being wounded. I decided to join the Navy and requested to go back to 1st Marines where I started,” he stated.

Lynn was commissioned as a Navy Nurse Corps Officer in 2006 with his first assignment to Naval Hospital Camp Pendleton where he served as a critical care nurse.

While serving at Camp Pendleton, Lynn deployed to Iraq in 2008 with the 1st Marine Expeditionary Force (I MEF) as an enroute care nurse with a Surgical Shock Trauma Platoon (SSTP). There he recorded multiple combat flights and mass casualty events. One of two nurses selected, Lynn successfully established a mobile SSTP at Combat Outpost Rawah giving I MEF the forward medical assets needed to successfully conduct Operation Defeat Al-Qaeda in the north.

“We were not able to save them all, but we were able to get a lot of Marines and soldiers back home to their families. That’s why we do this. That’s what Navy Medicine stands for,” he said.

His next assignment was to Navy Recruiting District Philadelphia where he earned awards as both the top officer and medical officer recruiter in the district. During this time, Lynn worked part-time in the emergency department at Montgomery County Hospital and earned his Master of Business Administration Degree from American Military University. He also served as the anti-terrorism/force protection officer for the district, coordinating with local and federal authorities to maintain elevated security posturing of recruiting facilities across five states.

Lynn then returned to critical care after being assigned to the intensive care unit at Naval Hospital Pensacola in June 2012. He served for eight months as the clinic manager of the urology department while continuing to work shifts in both the emergency department and ICU. Lynn served as the department head of the emergency department, and he is credited with building Navy Medicine’s first urgent care center and clinical decision unit. Additionally, he led the Chemical Biological Nuclear Response teams and recorded the Navy’s fastest mission capable response time ever recorded.

Lynn reported to 2D Medical Battalion, 2D Marine Logistics Group at Camp Lejeune, North Carolina, in January 2015 and served as alpha surgical company commander for one year before being asked to develop a training program to train and deploy Surgical Shock Trauma Teams with II Marine Expeditionary Forces.  He built a Combat Trauma Management Unit from the ground up and subsequently trained all combat surgical units deploying forward with II MEF. As officer in charge, he also led the first shock trauma platoon to operate in a large-scale Marine Corps integrated training exercise.

Lynn deployed as the enroute care nurse on the ground in West Africa for Operation African Lion, a multinational training exercise involving more than 3,000 Marines and sailors.

Last year, in March 2017, Lynn was selected to join the White House Medical Unit. He serves as part of a medical team whose primary mission is to provide medical care to the president of the United States. A medical team is always with the president – whether it’s a meeting of world leaders in Davos, Switzerland, or a speech in the Midwest.

“My main job is emergency response for the president. It is the greatest honor of my life to be chosen to serve in this way,” Lynn said. He maintains certifications in both critical care (CCRN) and emergency nursing (CEN).

Those who know Lynn back home in Cullman, his parents, of course, but also Wallace State instructors, classmates and even currently enrolled students he hasn’t met yet, are brimming with pride to learn of his accomplishments.

“We are extraordinarily proud of Chris,” said Deborah “Pepper” Hoover, head of Wallace State’s Nursing Program, which has been designated by the National League of Nursing as a Center of Excellence. “He represents the highest degree of excellence and service in our profession. Not only is he a tribute to our program, but he is an inspiration to our students. He demonstrates the wide variety of experiences open to nurses, and the opportunities a degree from Wallace State can provide.”

Lynn added, “I wanted to share my Wallace State story because that is where I got my start. Wallace State gave me the tools to succeed. I hope my story will encourage future generations of Wallace State nurses to embrace this life of service and to aspire to do more than they previously dreamed possible.”

Lynn’s parents are Lynne Lynn residing in Vallejo, California and Albert Lynn residing in Foley, Alabama. Lynn and his wife Tracy have three children and currently live in Arlington, Virginia. He is currently enrolled in the Acute Care Nurse Practitioner Program at Georgetown University.