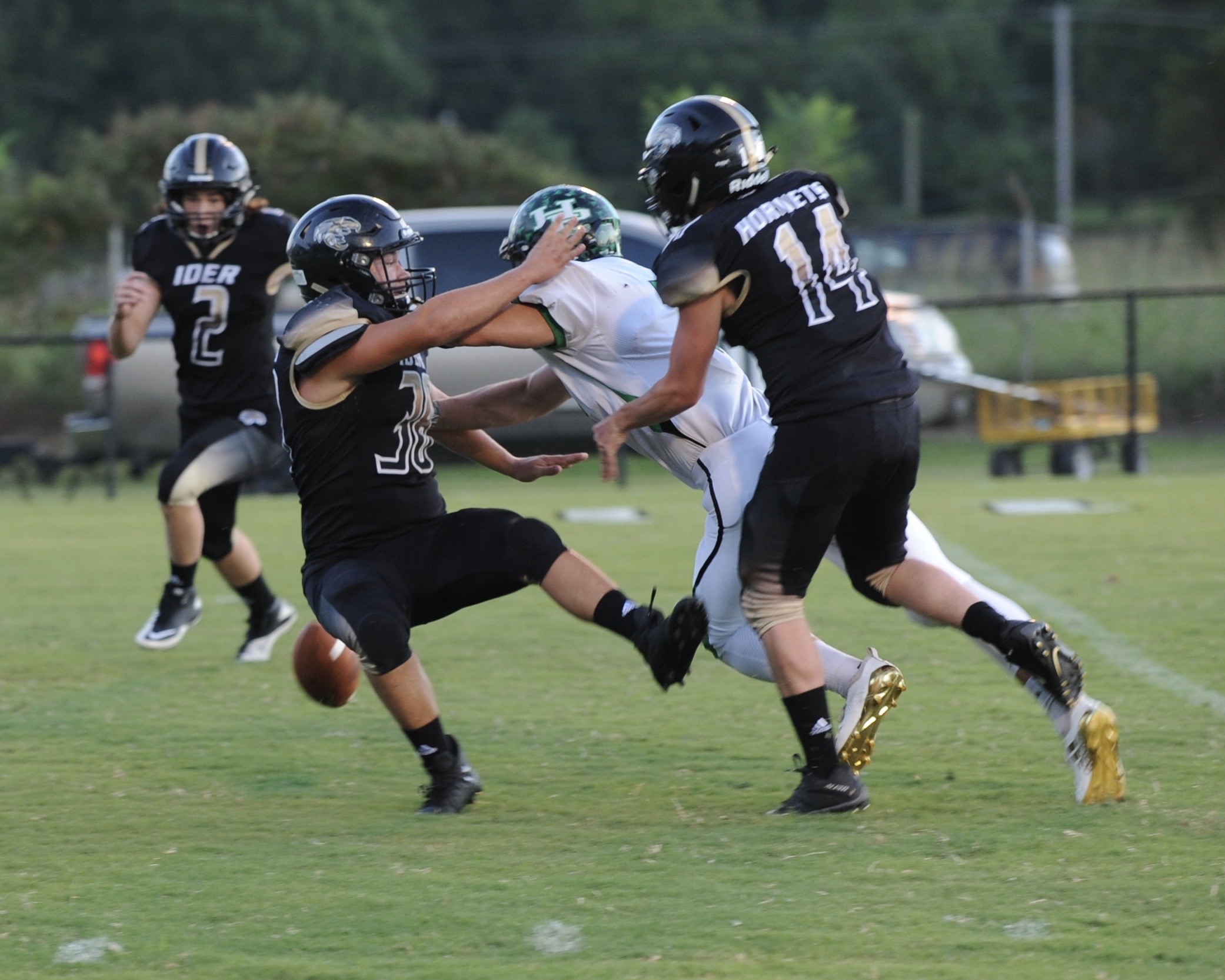 Photo by Howard Cole for The Cullman Tribune

IDER – On Friday evening, the Holly Pond Broncos (Class 3A, Region 5) made the long trip almost to the Georgia line to face Ider High School Hornets (Class 2A, Region 8), who lost their season opener in an away game v. Pisgah.  The Broncos, on the other hand, were coming off a convincing season-opening home win against New Hope, with impressive performances by quarterback Kyler Chaney, Jeremiah Holmes and Alex Corneglio.  Those three, along with Tyler Simmons, Tyler Boatwright, Josh McGinnis and Brody Rowell all showed up for Holly Pond again this week, the Broncos taking the 36-13 win.

The Broncos received the opening kick and after a long first down on the first play from scrimmage and a dramatic fourth-and-long conversion, Holmes scored the first touchdown for the Broncos, followed by a 2-point conversion.  The Hornets’ first possession ended with a fumble picked up by Broncos defender Boatwright. Another Holly Pond touchdown from Chaney followed with no extra point. During the rest of the quarter, Ider was trapped in its own territory, punting twice to end the quarter with Holly Pond up 14-0.

Holly Pond went three-and-out to start the second quarter and had a punt blocked. The Hornets’ resulting start, deep in Bronco territory, led to a touchdown followed by an extra point. The Broncos answered with another touchdown from Chaney, capping a drive with impressive plays from Boatwright and senior Corneglio. After that, the teams traded turnovers before Ider put a drive together to get one more score in before halftime. At the break, Holly Pond led 20-13.

Ider received the kick to start the third quarter and benefited from a Broncos penalty to get good field position. The Hornets began to drive but stalled and turned the ball over on downs at the Holly Pond 21.  Following that, four consecutive drives ended with turnovers: three fumbles and an interception and the quarter ended with no change in score.

The fourth quarter opened with the Broncos in possession of the ball, but they stalled and turned the ball over on downs. Ider’s succeeding drive ended near its original line of scrimmage. After the punt, Holly Pond drove the field, ending the series with a Chaney quarterback keeper for a touchdown. After the 2-point conversion, the Broncos led 28-13.  The Hornets made one last attempt to get back in the game with less than four minutes remaining, but the drive never got off the ground. Holly Pond got the ball back and Simmons put up one more touchdown for the Broncos to finish the game with a 36-13 win over Ider.

Holly Pond will look to stay in the win column when the Broncos host the Midfield Patriots (Class 3A, Region 5) next week.