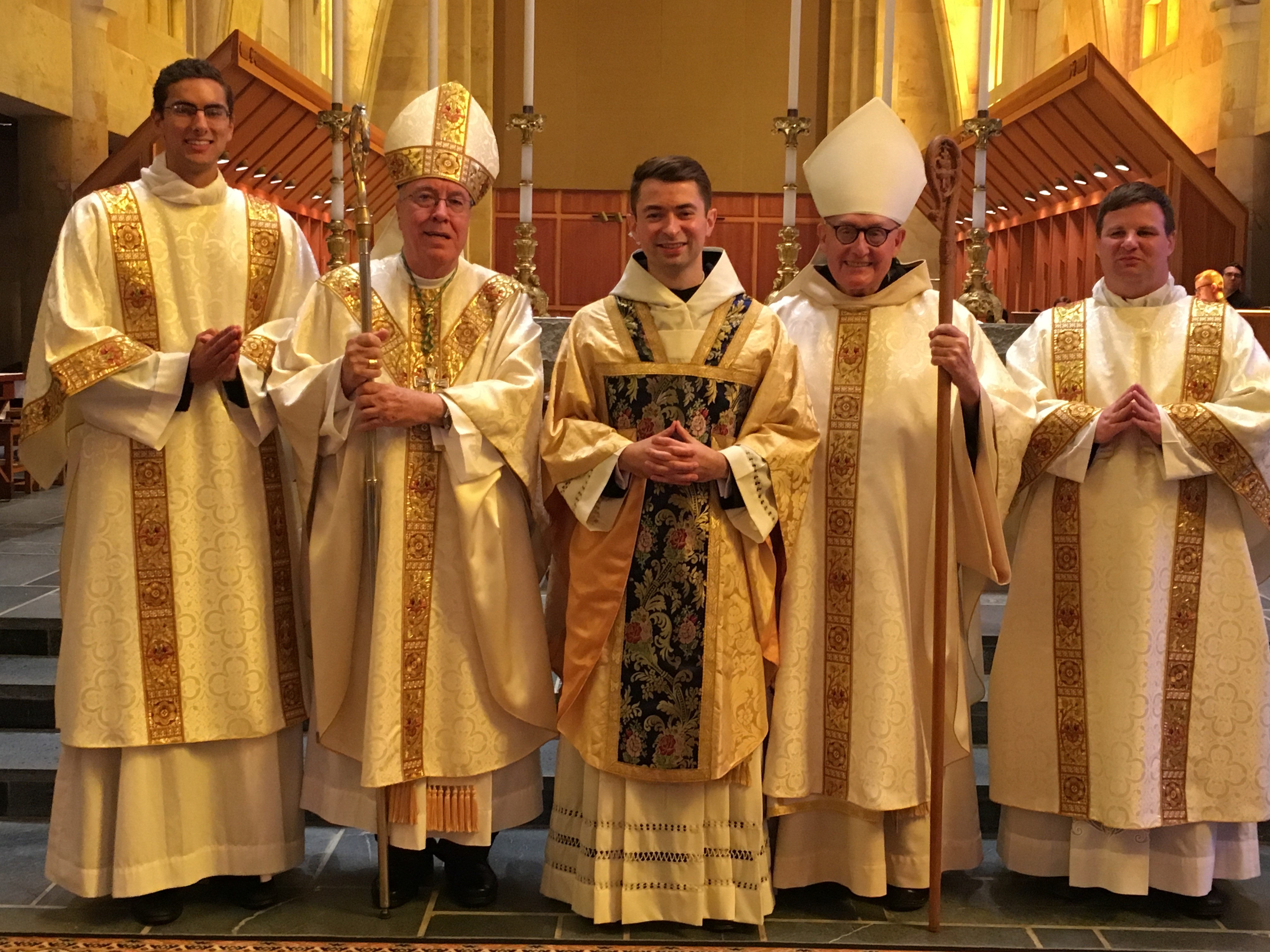 Brother Bernard invited Sister Marian Davis, O.S.B., his high school English teacher and a mentor in his studies of British literature, as well as his brother, Nathan Denson, to serve as lectors at the Mass.  He was clothed in the priestly vestments by Abbot Cletus.  His parents, Loren McGhinnis and Steve Denson presented his chalice and paten, holding wine and bread.  In his homily, Bishop Baker spoke about the importance of Brother Bernard’s commitment to Catholic education and expressed his hopes that Brother Bernard’s priestly ministry would continue to include this venerable tradition of the Church’s role in the world.  After the Mass, Father Bernard gave his first priestly blessings at the reception, where Chef Thomas Maddux and his team served an exquisite luncheon showcasing the South’s culinary repertoire.

The following day, Father Bernard celebrated his first Mass of thanksgiving in the abbey church.  Sandra Ashley, a dear friend who greatly encouraged Father Bernard in his priestly vocation as a child, and Diana Urbina, a high school classmate and longtime friend, served as lectors at the Mass.  The gifts of bread and wine that Father Bernard would consecrate for the first time were presented by his very close friends Niño and Catie Yu Tiamco along with their infant son—Father Bernard’s godson—Oliver.  Father John McDonald, a priest of the Diocese of Birmingham and chair of homiletics at the Pontifical North American College in Rome, delivered the fitting homily for the occasion, preaching on the disposition of the priest as a pastor and “good shepherd” of God’s flock.  In a moving moment at the end of the Mass, Father Bernard presented his parents with special gifts: to his mother he gave the traditional manitergium, the chrism-soaked cloth used to bind his just-anointed hands by the bishop the day before, and to his father he gave the stole worn while hearing his first confession.

This fall, he will spend about six weeks studying German at the Archabbey of Sankt Ottilien in Bavaria, Germany, before starting work on his license in sacred theology, specializing in the historical development of dogmatic theology, at Sant’Anselmo in Rome, as well as a part-time master’s degree in English literature through the University of Oxford, which requires occasional residential modules on campus in England.