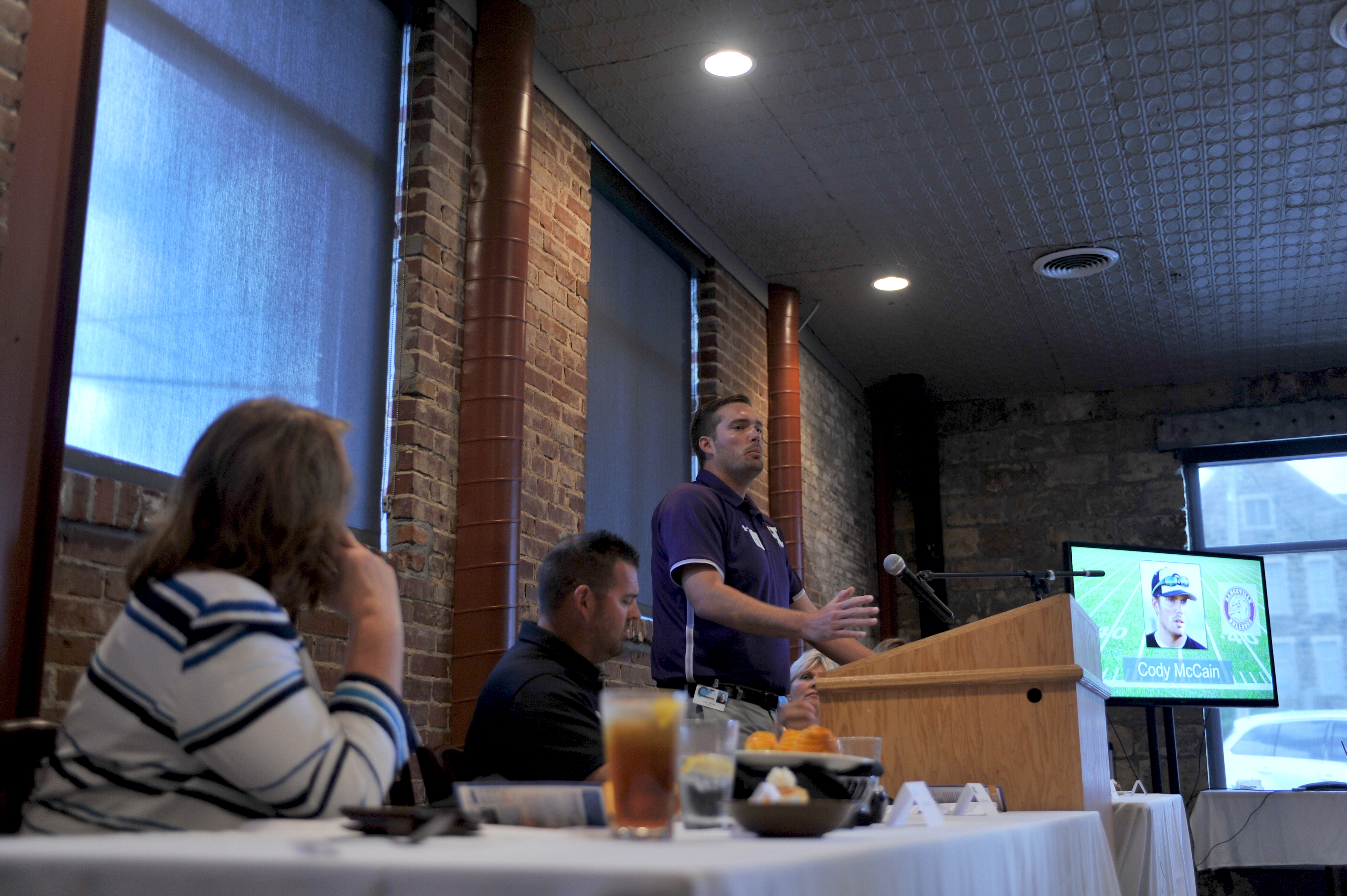 CULLMAN – High school football was the theme of the Cullman Area Chamber of Commerce’s August Community Luncheon on Friday, with both of the new local head coaches on-hand as the featured speakers. Matt Plunkett and Cody McCain are entering their first seasons at Cullman High School and Hanceville High School, respectively.

McCain, a graduate of West Point High School, was hired in April after most recently being the head coach at Clements High School in Athens. He talked about his career path that his brought him back home as the head coach of the Bulldogs.

“I’ve been at some really interesting places. None of those jobs that I’ve had are very glamorous jobs except for the one I have now, in my opinion. A lot of the schools I’ve coached at, the idea was, ‘We need to either shut the football program down or hire Cody,’ so, I’ve been at some places that can be pretty tough to coach at,” McCain said. "When I graduated college in 2008 that was a time when you opened the newspaper up and saw teacher layoffs all across the state. It was a bad time in education, the budget was bad, and a lot of non-tenured personnel were getting let go everywhere and a lot of people told me if I’d just start subbing or take an aid position I might be able to get my foot in the door. Well I had a young family at the time and that really wasn’t an option for me, so I decided I was going to send my application everywhere in the state and hope that something comes up. Something did come up in Monroe County at Excel High School.”

Coaching in a different part of the state was a new and at sometimes strange experience for McCain. He believes that joining the Pleasant Home staff afterward was a pivotal decision for his career and paved the way for his next step as a coach.

“My vision and my knowledge of south Alabama growing up was that I’d been to Montgomery, I’d been to Auburn and I’d been to Gulf Shores. That’s about all I knew about south Alabama, and with the experience I gained at Excel and then later at Pleasant Home, it’s a different world when you get below Montgomery. We’re still part of the same state, but it’s a stretch,” McCain joked. “It’s a different world and you may call a repairman who says he has nothing to do but he says it’ll take him three days to get there. Life moves really slow in south Alabama. Pleasant Home is 7 miles from the state line, about 55 miles north of Pensacola. Those kids were some of the hardest-working kids I’ve ever been around before, but they were also the most country kids you could ever imagine. We have country kids here, but they wouldn’t hold a candle to what you see there. My first day there a lot of the kids showed up in shorts and boots and that was it. No shirts, no athletic shoes, no cleats, just shorts and boots, and I’m thinking ‘What in the world have I gotten myself into?’ But the coach there, Coach (Robert) Bradford, really took me under his wing and I learned so much about coaching football and the game of football from him and I owe a ton of credit to him for what I’ve been able to do since then.”

In his time at Pleasant Home, McCain saw the players step up to the challenge that was presented to them and make things happen at their school that had never happened before. These years were also another opportunity for McCain to grow as a coach and take on his first head coaching job.

“The kids bought into what we were trying to do, and we won five games and made the playoffs. I think they had made the playoffs one other time in school history, and people felt like (Bradford) had done such a great job just making the playoffs that he got hired at Enterprise to be the head coach. I was 23 at the time and I went ahead and applied for the job and the principal called me in and said he just couldn’t turn the program over to a 23-year-old and I told him I understand,” McCain said. “He brought in a coach from Florida and that next year Coach (Ronnie) Douglas did the defense and I did the offense and we won eight games, which was the most the school had ever won, and we won the first playoff game in school history. They felt like (Douglas) really did a great job and so he got the job at Tate High School in Pensacola and this time I guess that year of maturity did me some good because they did hire me,” McCain joked.

“I say that to say at 24, I thought I was the smartest guy in the building everywhere that I went. Here I am at 24 and I’m a head football coach, a lot of guys have to wait until they’re 44 to get that kind of opportunity, and I made mistake after mistake with that responsibility, but I am grateful for it because I learned a lot,” shared McCain. “Now I have the mentality that hopefully if I’m the smartest guy in the room, then the room isn’t very bright. I want to have people in the room that are smarter than me, more experienced than me and that will help me out. Being a head football coach, there’s so many people you have to rely on to be successful and do what you need to do to have a successful program.”

McCain is excited to return to Cullman County for the tradition and history on the field, but he’s also been surprised to see how much the area has changed in the last decade.

“To be able to see the growth in the city and the county in the last 10 years, when you look at it from afar, has been really amazing because I’m old enough to remember when Wal-Mart was in the Hobby Lobby building. Some of you guys that have been around here a long time know what I’m talking about,” McCain said. “I moved away in 2008 and when you come back in 2018 and see all the things that the city and county have to offer now it’s amazing. We’re really excited to be back here.”

Plunkett, who came on board at Cullman in January from Gardendale, talked about his anticipation for game one next week and what will be going through his head before the game that night.

“I know I’m going to lose all credibility with the statement I’m about to make, but this morning I had breakfast with Jimmy Dale (Burgess) and he asked me, ‘Next Thursday night when the national anthem is playing and you’re getting ready to be the head football coach at Cullman for the first time, what’s going to be going through your mind?’ And I told him, there’s going to be a lot of emotions there,” Plunkett said. “Most people probably think it’ll be ‘What’s going to be our first play call?’ or ‘How is the game going to start?’ ‘If the game starts bad, what adjustments do we make?’ ‘If the game starts good, can we keep our kids out of the clouds?’ What’s going to be on my mind during the national anthem is my cousin who went and fought in Afghanistan for six years and represented our family. I think about my daughters, I think about my wife and just think about how fortunate I am to be part of something really special. Those are the things that are on my mind. I pray as a football coach to always keep those things close at heart.”

Plunkett shares that mentality with his teams and believes that as long as they are focused on the important things in life like, things will take care of themselves on the football field and beyond.

“In my experience, with the players I’ve coached, the ones that are focused on the important things become winners. They become very successful not just in athletics, but academically most importantly, and on into their future careers and as husbands and fathers. That’s my coaching philosophy. I can be a really hardnosed guy; we had a couple guys find that out yesterday when I kicked them out of the stadium, but I’m a pretty soft-hearted guy too when I drove in on the ice cream truck after practice,” Plunkett said. “So, the key with Coach Plunkett is you better be on your toes because I’m going to coach your heart, I’m not going to coach the athlete because I believe if your heart is in the right place you can accomplish anything. Guys I’ll tell you, you’re going to get my heart and soul and everything about me and I pray that our teams play that way as well. The number one thing I tell everybody, our players do the job they’re supposed to do in the classroom, so we’ll have good students and that means we’ll have good players. If we have a team that buys into that hardnosed, academic mentality about being where they’re supposed to be and excelling in the classroom, I’ll show you a great team.”

For Plunkett, the most important thing to worry about at this early point in his tenure at Cullman is building the program the right way. The foundation for the future is something he is focused on and he has a clear plan for what he wants the program to be about.

“I’m just looking forward to some really special moments. I hope I’m here for the rest of my career; that is my goal. That’s going to require a lot of hard work and I’ll close with this: For us to do this the right way at Cullman High School, we need to be the man that builds our house on the rock,” Plunkett said, “with a solid foundation so that when adversity strikes, we can handle it. When the winds blow, and the rain comes, our house is going to be strong because it was built the right way. We don’t want to be that man who built his house on sand, because when times get tough we all know what happens to that house. So, our program is going to be built on discipline, toughness, detail and a commitment to excellence.”