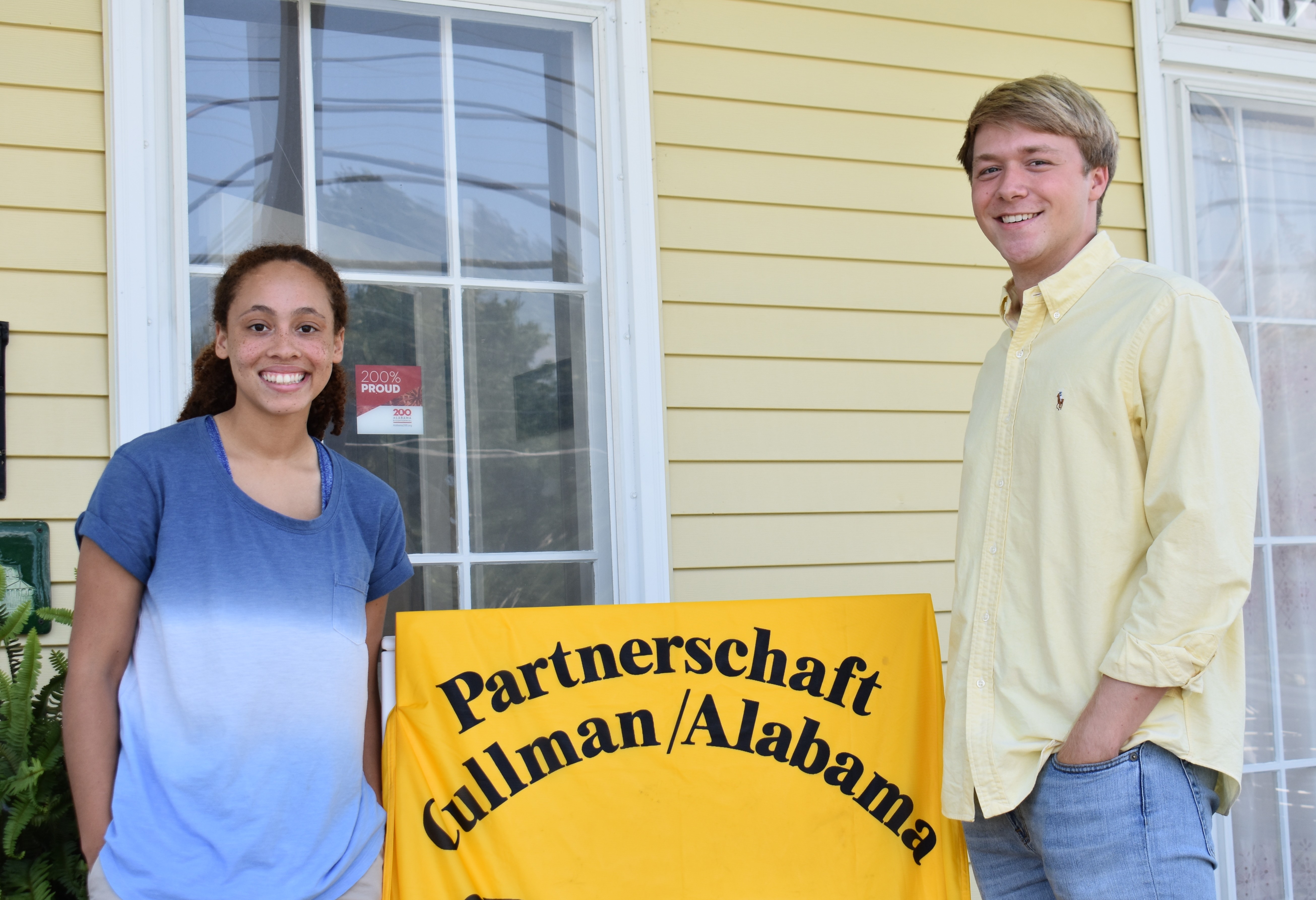 CULLMAN – On Sunday afternoon at the Cullman County Museum, Cullman’s Friends of Frankweiler heard from Alexis “Lexie” Marks and Kevin Killen, who spent part of their summer as ambassadors for the German heritage group to Cullman’s sister city, Frankweiler, Germany.  The students spent two weeks in Frankweiler and Landau with members of Frankweiler’s Friends of Cullman, touring the region, visiting other places like Stuttgart and Heidelberg, and getting a feel for the local culture far beyond a typical tourist experience.

Killen told The Tribune, “It was less of a culture shock than I expected, but it was definitely something I had to get adjusted to.  But, once we got over the jet lag and kind of got past the language barriers and everything, it was a great experience.”

The students showed the club videos and photos of their travels through the Black Forest and vineyard country, talking about mountain biking with locals, visiting Heidelberg Castle, attending festivals and enjoying an insider’s view of life in the region.  They noted how German teens like to listen to the same music and enjoy the same television shows as American teens, and how they tend to have an easier time communicating with English-speaking visitors than their parents and grandparents.

Marks and Killen saw Col. Cullman’s home in Frankweiler and also had the opportunity to cross the French border to visit Wissembourg, a town that changed hands many times between Germany and France through history, giving it a hybrid culture.

Marks told the audience about her stay in Frankweiler, “I did feel at home there; it felt like Cullman kind of.  I could see the resemblance. Being there, I’ve seen that we do have a relationship, even though we probably don’t communicate the best or whatever.  It’s just that we’re family, in a sense. So, I felt that when I was over there. They always took care of me and stuff, like they knew me my entire life.”

For Killen, the highlights of the trip included visits to the Porsche automotive museum in Stuttgart and the Heidelberg Castle.  Marks also listed the castle, along with attending the Frankweiler Wine Festival and riding a vintage tractor through the countryside from town to town.

Then she added, “I think I’ll remember the people I met the most. I think that was one of my favorite parts, was just hanging out with other people, honestly.”

Marks said, “I would say do it, for real.  I would say just to do it, because it is a once in a lifetime chance to be able to see the connection we have with another town, because I’ve seen it as well.  And I was like, 'Wow, this is really something we have in relationship, you know, like we are related even though we have different parents and different blood.'

“But that town is very much just like Cullman, I would say, and the teenagers are the same.  And I think it would be cool to go over there and just see that we have a relationship with other teens, and they’re just like us: they listen to the same music, same shows, and they do everything we do, and I think it’s a pretty cool experience to meet those teens.

“And I would join the club and stuff to be able to go, as well, if I was them.”

The students hope to make a presentation about their trip to Cullman High School’s German Club this fall.

For the Friends of Frankweiler

Cullman and Frankweiler are historically connected by Cullman founder Col. Johann Cullman, who was born in Frankweiler.  Cullman’s Friends of Frankweiler organization works with Frankweiler’s Friends of Cullman to promote cultural exchange between the two cities.  On alternating years, students and adults from each city’s group get the opportunity to travel to the other, to stay with hosts and get a “non-touristy” inside view of the local culture.

Said Killen, “A huge thanks to the Friends of Frankweiler.  It’s definitely an opportunity that we wouldn’t have gotten otherwise, and something that we’ll remember for a lifetime.”

For more on Friends of Frankweiler, including membership and travel opportunities, visit www.facebook.com/friendsoffrankweilerandcullman/ or call the Cullman County Museum at 256-739-1258.