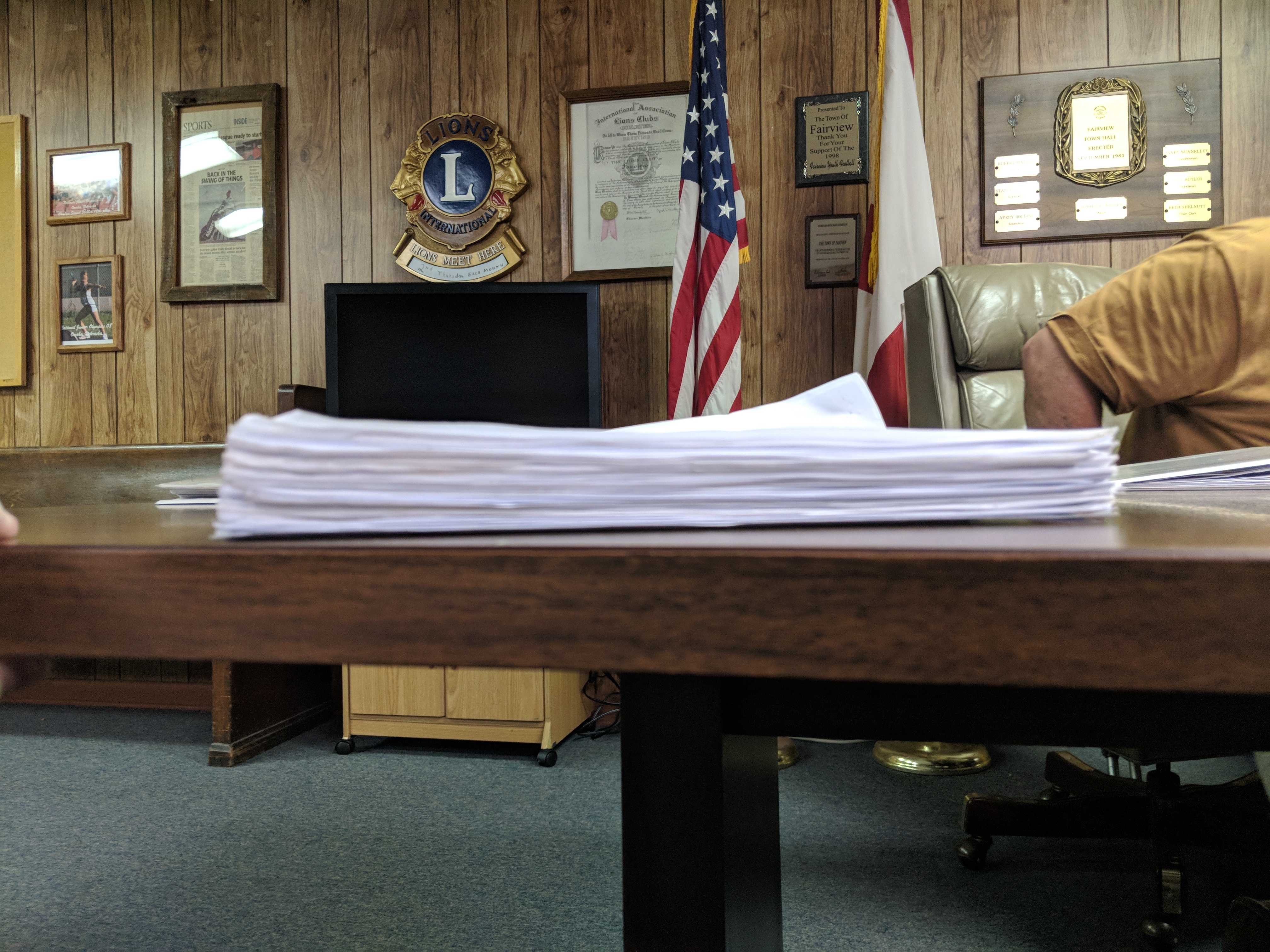 The final petition to have a four-way stop installed at the intersection of Alabama Highway 69 and Wesley Avenue was nearly two inches thick. (Heather Mann for The Tribune)

FAIRVIEW – Following safety concerns about limited visibility, speeding drivers and a wreck that required an Air Evac medical helicopter, resident Chris Kilgo began a petition campaign around the Fairview-Holly Pond area to have a four-way stop installed at the intersection of Alabama Highway 69 and Wesley Avenue, at which sits The Hutch Restaurant and the Fairview Quick Stop. The petition ran from July 3-24, receiving 2,727 signatures before being presented to the Fairview Town Council at its meeting on Monday night.

ALDOT stated it would conduct a traffic study of the intersection and the surrounding area to help with its decision, and also told Kilgo that – although the petition was a good start – the request for the four-way stop would have to come from the Town itself. The council felt sure that the project would have the support of the townspeople but said the cost of the most likely solution is still daunting. The council said that with the high speeds that people use on the highway and the offset nature of the intersection, a full set of stop lights would be much more noticeable than just two more stop signs. Even with an offer from the state to pay half the installation cost, the Town would still pay more than $50,000.

Other financial concerns involved possible maintenance costs (as the Town would be entirely responsible for maintenance and upkeep) and power bills to keep the lights running, but Kilgo had answers for that, too. After talking with the Town of Holly Pond about its stop light costs, he estimated that if Fairview worked out a maintenance deal with the City of Cullman, then basic upkeep and repair costs would typically be between $100-$150, and a power bill of roughly $50-$60. While the extra costs were less than originally expected, the Town will still have to budget a fund for the stop light in the event of larger malfunctions or a complete replacement is needed.

The council made no decision Monday and is awaiting more information from ALDOT.

– The work being done on a clearing in the woods near the park is going well. The Town received several loads of loose asphalt and will start graveling the trails once everything is cleared out.

– Saturday, Aug. 11, will be the Fairview band's fourth annual car and tractor show in Randall Shedd Community Park. The show will go from 9 a.m.-2 p.m. and organizers have recently announced that there will be a surprise performance added to the entertainment roster at 11 a.m.

– The council discussed putting up new town limit signs on either side of town along Hwy. 69 but did not make any decisions yet. On the subject of signs, it also discussed the idea of putting up large signs (similar to the one at the community park) around several fields to prevent visitors from getting lost while looking for the right field.

– A surplus list from Eva included an old dump truck that the council thought would be useful. While the battery wasn't in good condition, the dump bed and motor still worked well. No decision was made.

The Fairview Town Council meets on the first Monday of each month at 7 p.m. a.t Fairview Town Hall. The public is welcome to attend.