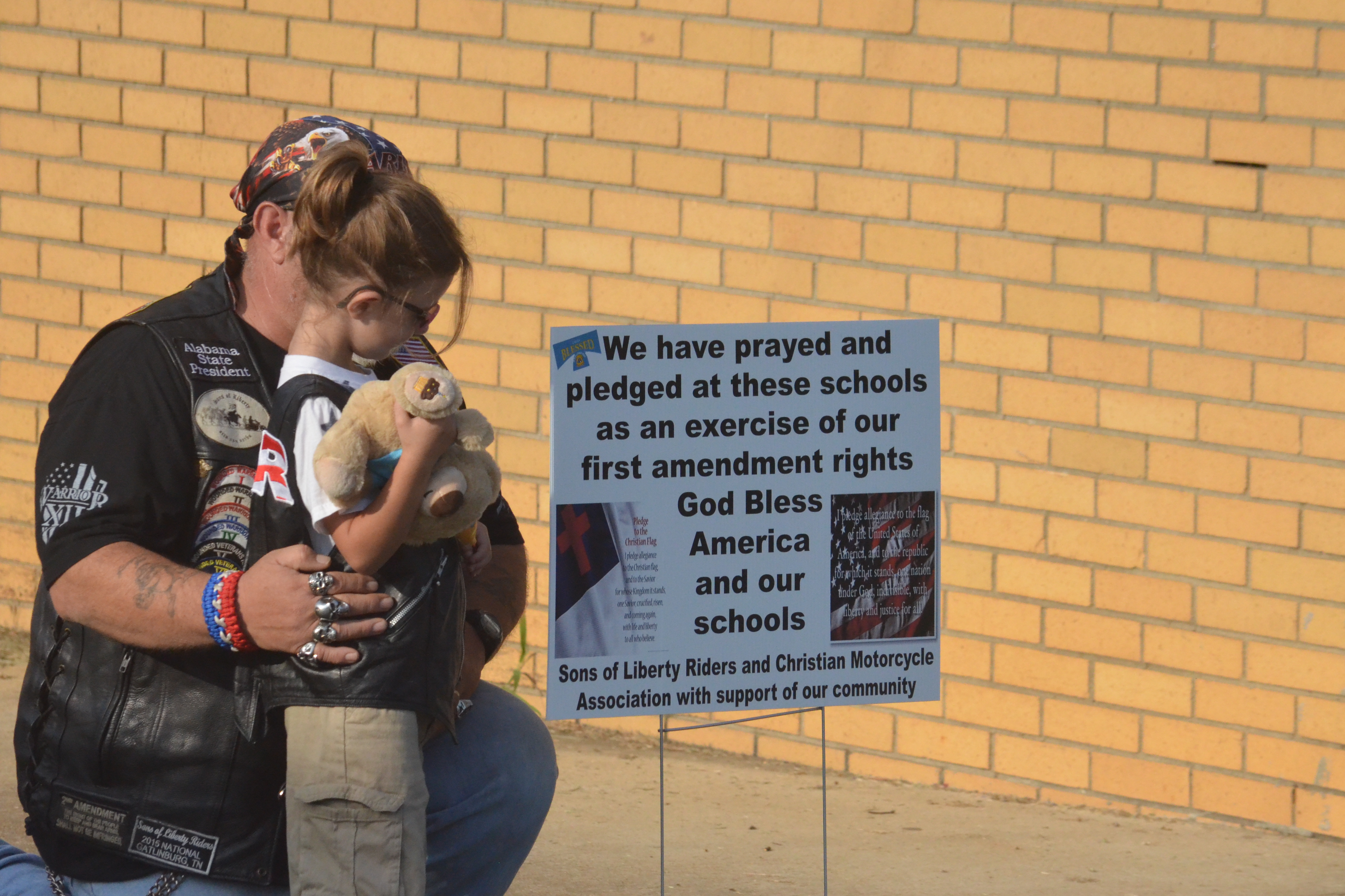 Alabama Sons of Liberty Riders President Joe Alverson and his granddaughter kneel beside one of the signs they placed during Saturday’s Cullman County God and Country Ride. (Nick Griffin for The Tribune)

CULLMAN – Several schools in Cullman County got a visit from the Alabama Sons of Liberty Riders and the Christian Motorcycle Association on Saturday. Both groups gathered for the Cullman County God and Country Ride to promote prayer and the Pledge of Allegiance in schools. The trail started in Hanceville bright and early and made its way all around the county before finishing up in Good Hope in the afternoon.

Alabama Sons of Liberty Riders President Joe Alverson was excited to start the ride Saturday morning and touched on the reasons behind the event.

“The reason we’re doing this is because they’ve taken the ability for children to pray or to say the Pledge of Allegiance out of schools. It’s one of your standard First Amendment rights, you should have the ability to do that. We don’t believe in a forced religion. The religion that you choose is your choice, but you should have the ability to do that, it’s one of your constitutional rights,” Alverson said. “They’ve done away with things like cursive writing so that the generation coming up now will not even be able to read the Constitution because it was written in cursive. You can get someone’s interpretation of the Constitution that is printed but that’s an interpretation.”

Part of the Riders’ message is freedom of all religions in school, and Alverson believes that is an essential part of America’s foundation.

“We’re not for one religion, we’re for all religions. We believe that it’s your right to practice what you want. They’ve taken that away from our schools and then complain about our schools being in such bad shape. Well, in my opinion, if you do away with God, then God is going to do away with you,” Alverson said. “If you’re not allowing him in the schools, people say, ‘How could God allow this to happen?’ Well, God’s not allowed here. You reap what you sow, and if you sow evil, you’ll reap it. That’s why we’re standing up for this, you know. We need to get back to the America that our Founding Fathers made and that’s what we stand for. Our Founding Fathers set up this nation in a certain way and that’s how we believe it should be today.”

After the Ride finished up in Good Hope, Alverson talked about the support that he and the riders received on their stops.

“We had a good turnout, had several people show up and support us at the schools. We were able to place a sign at every school in Cullman County that we had on the list. We prayed for those schools, and the community was really supportive, so we had a good day. We prayed for their protection. You see stories in the news about teachers and students and people being harmed inside of schools so we’re praying that nothing like that will ever happen to these schools.”

Although Alverson and the Riders are concerned about the state of religion in schools nation-wide, Alverson said he feels blessed to live here in Cullman and wishes more of the country had some of the same qualities.

“We are really fortunate to live here in Cullman County. It’s a Christian-based county; we do have other religions here and we’re not against that, but it’s a Christian base. We’re not as big as some of the other counties surrounding us and I think that may be a good thing, because we’re a tight-knit community. You hear about people doing causes and raising thousands of dollars all the time around here because we care here. We care about our fellow man here and I think that’s great. That’s the way I was raised and I’m glad that my granddaughter is going to be raised in a county that still cares about people.”