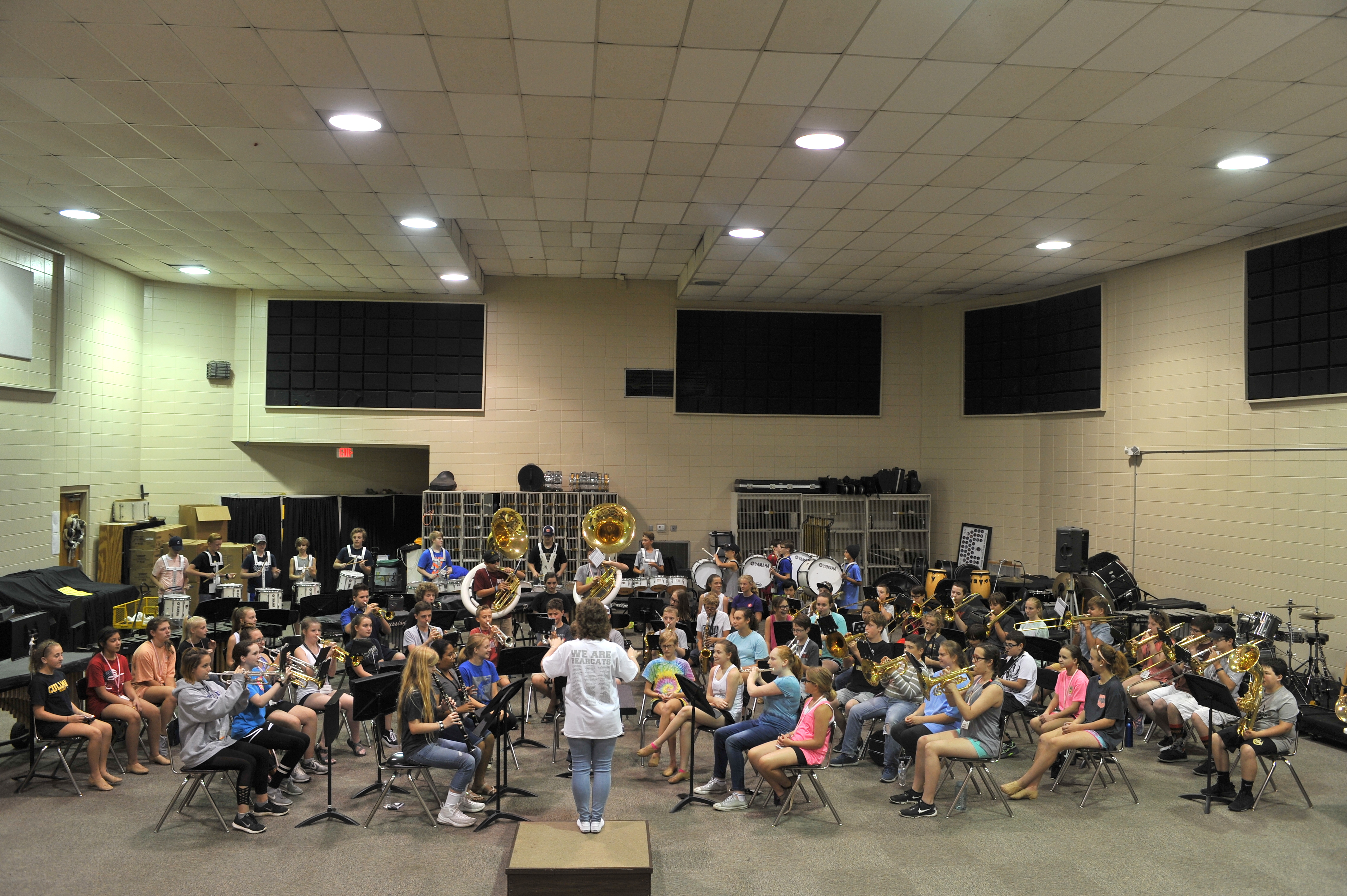 CULLMAN – Members of the Cullman Middle School (CMS) band met Wednesday for their third day of band camp. The band is preparing for its performances during the upcoming middle school football season.

CMS Band Director Linda Bean said her band does something a lot of middle schools do not.

“This is our seventh- and eighth-grade band, and these students are getting ready for marching season,” said Bean. “We play at the home middle school football games, we march in the fair parade, we play at the band exhibition and we do a joint performance with the high school band at homecoming. We're one of a few middle school bands that does go on the field and march; a lot of middle schools play in the stands.”

The CMS band will have a different look on the field this year, thanks to Cullman High School.

“We have new uniforms, because our high school band, through the help of the community, raised funds with the band boosters and bought new uniforms and their old ones are passed on to us,” Bean explained. “So these are new to us and we’re excited about seeing them on the field this year.”

The CMS band promises a little Latin flavor from this year's show.

“It's going to be a Latin show. We're doing 'Smooth' by Santana, then 'Mambo,'” Bean said. “(Mambo) was actually arranged by one of our graduates, Tyler Jones; he is studying composition at the University of Alabama. He's a graduate assistant and he does a lot of arranging for the Million Dollar Band at the university and he arranged a song for us this year.”

And how have the younger students been handling the summer heat?

“It's been terrific,” said Bean. “It was a little hot today, but we’ve been very fortunate. The temps have been a little bit cooler than normal for years passed and we've had a nice breeze, so we're thankful.”

“We attend the high school's (end of band camp performance) and they have an ice cream social and they’ll meet and greet,” Bean said. “It helps our young students get to know our older students and it builds camaraderie and helps with the transition when they move up to the high school. So we try to do quite a few things together, like that, to just build a good bridge to help them move forward.”

She continued, “Becoming a musician is something that takes years to perfect, so we start young and just build on it each year. It builds a very strong foundation for the future and in our community; we even try and show the kids that they can enjoy music beyond high school and college, by being a part of our community band. It's a lifetime endeavor, but we hope to enrich their lives forever, not just while they're in school.”

“I'm helping the woodwinds- clarinet, saxophone and flute,” said Maclay. “I recently got back from Belgium and France. I performed in Ostend, on the coast of Belgium, for the International Clarinet Association Clarinet Fest. I'm from Huntsville originally.”

Maclay has been helping the students with some of the basics to build a good foundation for them going forward.

“We've been working on breathing and posture, hand position, reading the right notes and playing the right fingerings. A lot of fundamentals that we're working on. It's been really fun, I think they've had a good time. I think they're a little tired now, but they're really good and they have a great attitude.”