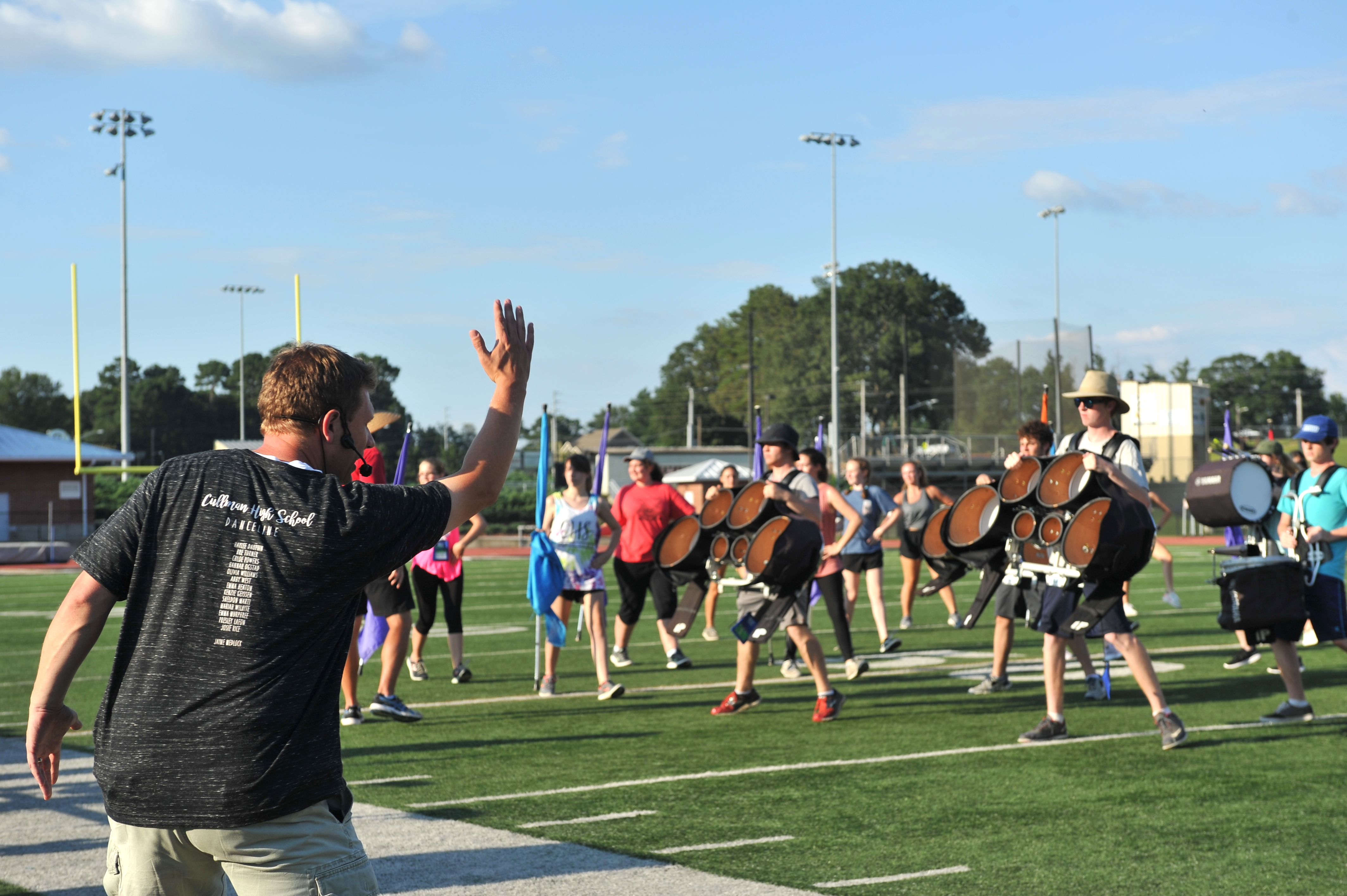 CULLMAN – The Cullman High School (CHS) Bearcat Marching Band is in its second week of full band camp this week, preparing for the rapidly-approaching football season.

“This week we have a morning and afternoon session,” said Smith. “We go from 8 a.m.-noon in the mornings, on our practice field, and in the evening we're in the stadium from 6-9 p.m. The only day that's different is Wednesday, we do an 8:30-10:30 p.m. rehearsal, so our students can go to church if they want to. We call that our moonlight madness rehearsal.”

Cullman's weather has been cooperating, according to Smith.

“It's been great. So far this week, we've had really great weather. It's been not too terribly hot, the rain's pretty much stayed away. It's going to get a little bit warmer, as the week goes on, but hopefully our students are acclimated to the outside and the marching and everything that goes along with it.”

According to Smith, the Bearcat Band has grown and is preparing an exciting show.

“The band’s a little bigger than it was last year,” he said. “We've got great students and we're looking forward to a great year. Our show this year is called 'Reflections of Our World.' It deals with the different elements of nature. There's a piece of music that deals with water, the earth itself, fire and the air. Each piece in the show deals with a particular aspect of nature and represents it musically.”

Parents and fans will notice something different about the Bearcat Band this year, Smith revealed.

“We have new uniforms this year; we're really excited about them,” he smiled. “It took the band boosters 10 years to raise the money necessary to purchase them and we’ve been working for the last two years to go through the design process and actually fitting the students and ordering the uniforms. That is going to be a big new thing that we debut at our first football game this fall, the brand-new uniforms provided by the Cullman Band Boosters.”

For those interested in seeing small preview of what the Bearcat Band has in store this year, Smith invites everyone to come to the end of band camp performance.

“We actually have a performance this Friday, at the end of band camp, at 7:30 p.m., for the parents and community or anybody that wants to come out and see what we've got so far,” said Smith. “Now, we won't have the whole show on the field, but we're going to play what we know, and we’re also going to play some stand tunes and do a little marching for everybody as well.”

Smith has big plans for Bearcat Band this school year.

“Throughout marching season, of course, we're going to play at all the football games, pep rallies, we're playing in the Cullman County Band Exhibition and the Cullman County Fair Parade,” explained Smith. “At the end of the season, we're taking the marching band to Orlando to perform at Universal Studios. We're going to march in the parks on Veterans Day and then spend a few days in the parks sightseeing and different things throughout Orlando.”

Smith continued, “After that, we transition to concert season. We're going to play our big Christmas concert in December and then our band splits into two different groups, the concert band and the symphonic band, and both of those groups participate in music performance assessment, which used to be called state contest, in the spring. We also have other performances throughout the spring. Also, our jazz band starts up at the beginning of school and performs at events throughout the year, including our Big Band Dance in February.”

Cullman High School fans and parents are in for an exciting marching season, said Smith.

“It's going to be an exciting year for Cullman High School. We've got a new head football coach, we're looking for an exciting football season from our team, looking for some great success there, and our marching band just hopes to contribute to that excitement throughout the game itself and on the field at halftime,” he said. “Myself and Mr. (Doug) Teuscher (assistant director of bands at CHS and Cullman Middle School) are looking forward to a great year with the Cullman band and we hope the community will come out to one of our many performances throughout the fall and spring and see what our kids are able to do.”