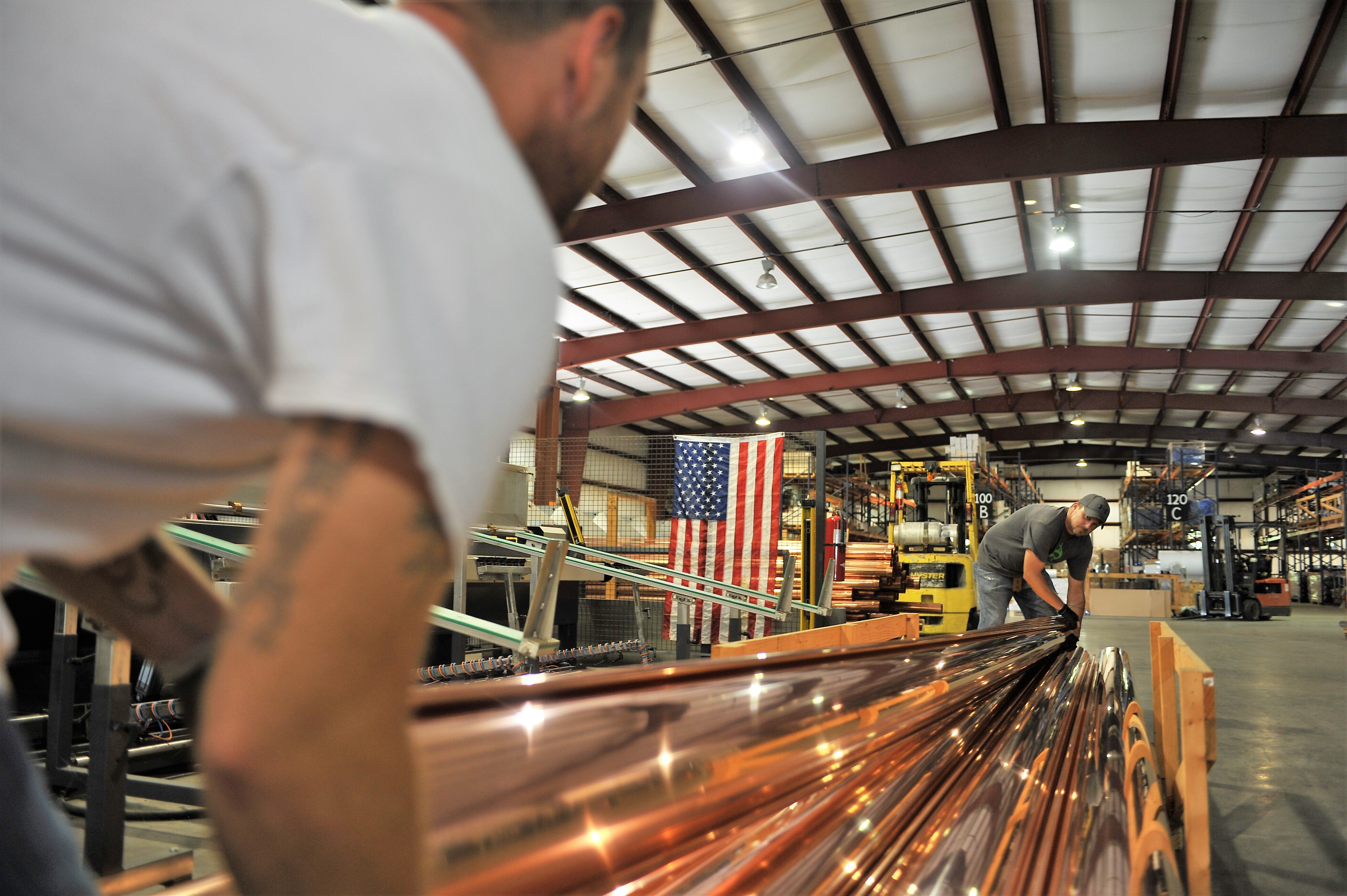 CULLMAN – Cullman’s Ornametals Manufacturing was honored with a North American Copper in Architecture Award for restoration for the company’s work on the Hadrian Cornice restoration in New York City recently.

Ornametals produces European-style gutters in copper and zinc, architectural ornaments, and they provide technical advice and consult with companies working in the historical restoration field.

The company was awarded for its more than 6,500 pounds of copper panels and ornaments used in the restoration of the Hadrian, an aged turn-of-the-century complex in New York City.

Guenther Huber, owner and president of Ornametals, said this isn't the first time his company has been recognized with the award.

“We've won the award six times and for different buildings,” said Huber. “This is a very prestigious award.”

Jenn Delle, marketing and sales manager with Ornametals, expressed her excitement about the award.

“I think it's cool, this little town of Cullman, with this little shop tucked away that nobody really knows about is getting this great recognition,” said Delle. “You can hear from the places that we've done all around the United States and abroad about our work. I think it's cool.”

Huber, who has a long family history of metal work, said his business has been in the Cullman area for 11 years now.

“We've been here in Cullman since 2007 I think,” Huber said. “(My family) has been in the metal business in Germany since 1820. So, we have been doing restoration and sheet metal for a long time.”

Ornametals products and services have been used in buildings and restorations all over the country, including the Kansas State Capitol building, Duke University and Princeton University. Huber said you can see his company's work around the Cullman area as well.

“You have good examples here in Cullman of what we do. Some private residences, the (Sacred Heart of Jesus) church, the First Community Bank,” Hubert explained. “There's a nice story behind that.”

He continued, “In 2009 we got approached because there was a company involved that really didn't know how to install a dome. So, they had fooled around already for five months and couldn't get it done. Needless to say, they got released, then they hired me and my company. We did the dome. Then, as we all know here in Cullman, in 2011 came the tornado. The bank building took a hit. So, after the storm we needed to do it again. And each time, I mean it's a significant contract because it's a little bit more artistic and we did a couple of nice details on it. Then, god forbid, we just had a hailstorm in the same place. So, we redid the First Community Bank building for the third time in the last seven or eight years. I was joking with the president of the bank and I said 'You know, maybe you need to move somewhere else. Maybe a little bit in the opposite direction because three times is a charm.'”

Cullman has been a great location for Ornametals according to Huber.

“The labor market in Cullman is much easier to get into (than) when you compete with the labor market in Huntsville. Cullman is good, you know,” Hubert said. “You have very easy access to the interstate out here. It's right in between Birmingham, in the south, or Montgomery; you have really good access to Atlanta for shipping. From the logistic view it's not bad at all.”

Ornametals has an extremely small staff, which is not always apparent by its work, according to Huber.

“We work with big architects; the architectural community knows us very well so it's really interesting,” explained Huber. “Sometimes they think we are a really, really big company, but they don't know how really, really small we are.”

Joshua Dean, a staff member with Ornametals, said the company’s products have a very distinctive look.

“Our products have been used on many major buildings. The state house in Kansas City, a lot of big churches, a very big building in New York. They're things that you wouldn't think you'd see on a normal building,” explained Dean. “They go for the historical look of the patina copper. It gives it that old look, that old-style look. It's mainly what the people want; they want to see that copper turned and look like a dirty penny.”

Dean said he enjoys working at the company.

“I've been here six years in April. I love it,” smiled Dean. “I couldn't hope for a better place to work. My bosses are great; they take care of us. It's very laid back as long as we get done what we need to get done. It's an awesome place to work.”