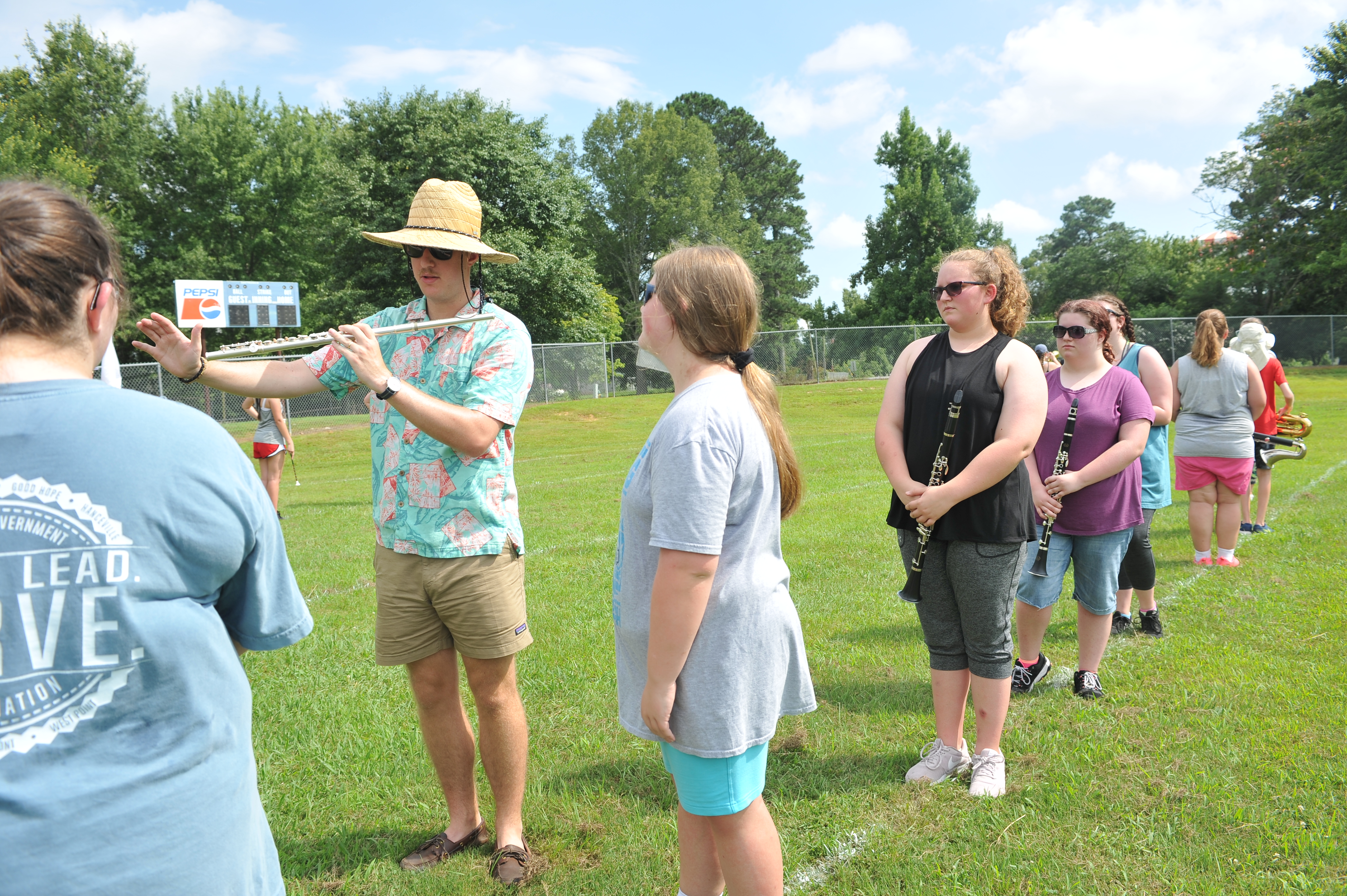 VINEMONT – Vinemont Marching Eagle Band members braved the heat on Tuesday for their second day of “mini” band camp. The band is meeting this week to go over fundamentals for new members and shake the rust off for older members before its full band camp starts next week.

“For ‘mini’ band camp, we’re really just trying to get our new members, our eighth graders and our freshmen, kinda acclimated to what we do,” explained King, “introducing them to marching fundamentals and working on our music, so that way when we get to full band camp next week, we're learning drill and the music and putting it all together to get ready for our halftime show.”

Vinemont has a younger band this year, but that's not a problem for King.

“We've gotten a little bit smaller, but we’ve got a really great group of younger students. That makes me really excited,” he smiled. “To have so many younger students in the band means they're going to be in the band for longer and continue to grow and build their leadership, so in the next couple of years we'll have a really strong base to build from.”

King and the Marching Eagle Band plan to have an exciting show for fans this year.

“The theme for this year's show is ‘Crazy for Love.’ We're opening with Prince's ‘Let’s Go Crazy’ Beyonce's ‘Crazy in Love,’ Van Morrison's ‘Crazy Love,’ and then closing out with Queen's ‘Crazy Little Thing Called Love,’” said King. “Definitely expect a crazy show. All the tunes are really up-beat. It's actually the fastest drill we've ever marched in the opener- 200 beats per minute. It's going to be a really fun entertaining show, so we're really looking forward to it.”

King says the band also has some big things planned for the year.

“This year were doing several fundraisers; we've got some blanket sales going on and we also have one of our largest alumni events that we've done as a band program,” he said. “September 21, our homecoming game, we're actually inviting all of our band alumni to participate in a large alumni band that's going to perform prior to the homecoming game.”

King noted one major change for the band this season.

“This year we have new uniforms. We had the other ones for about seven or eight years prior to that so we’re really looking forward to the new look,” he smiled. “The new uniforms are really sharp-looking. They’ve got a blue pant, and they've got a red-and-white coat, with some blue trip that's sequin. It looks really, really sharp.”

The Marching Eagle Band members will show off what they've learned at the end of their camp next week. King has invited anyone interested to attend.

“Next Friday, July 27 at 6 p.m., right here on the t-ball field, we’re going to have our family and friends performance,” said King. “That Friday is going to be our first performance. Come on out and see us!”