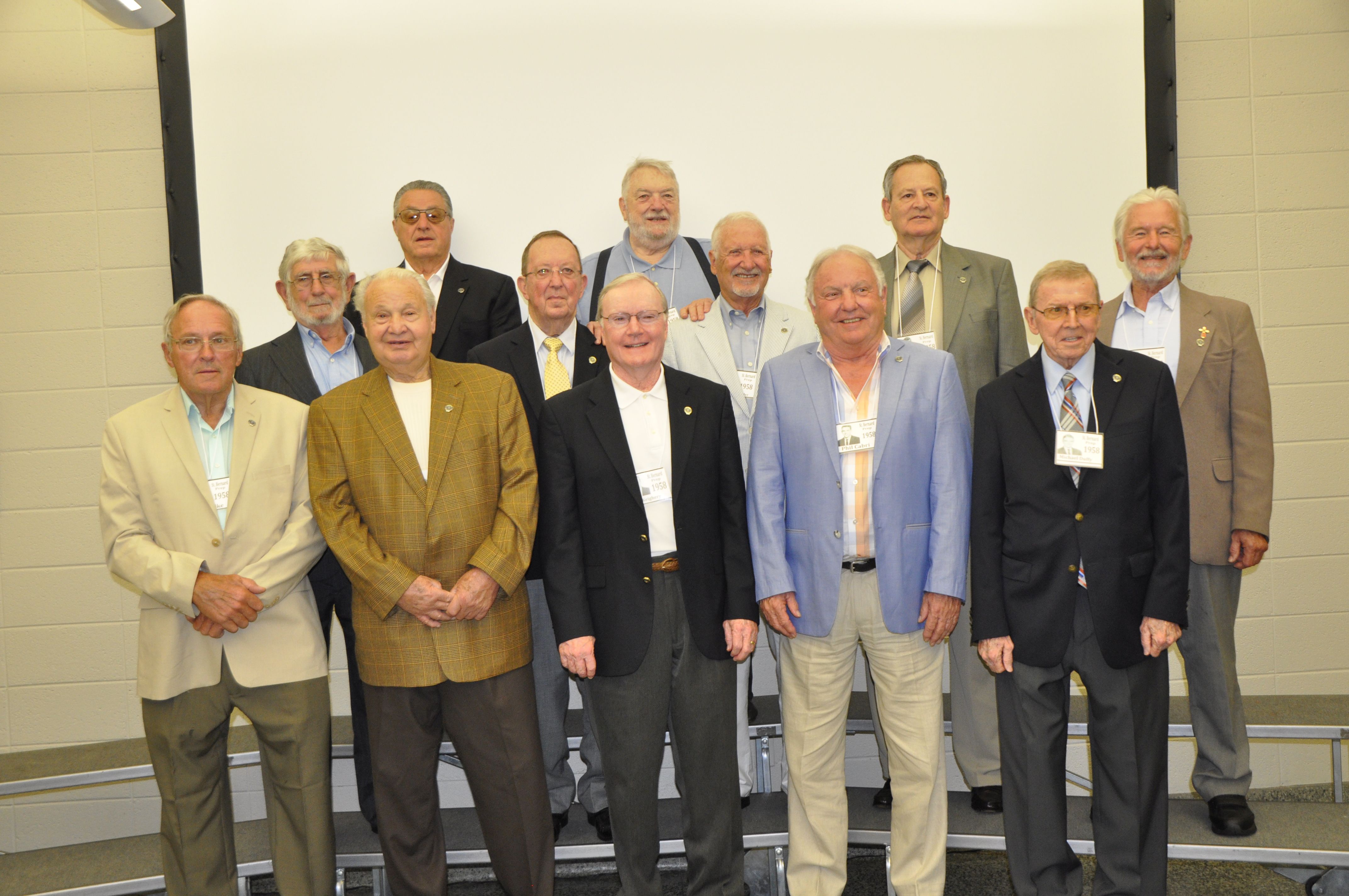 CULLMAN – More than 250 alumni from across the United States made their way back to Saint Bernard to celebrate the annual Alumni Reunion held in Cullman on the last full weekend in June.

On Thursday evening, June 21 alumni golfers gathered for a golf reception sponsored in part by Kassouf and Company and Richard Electric in the Brahma Room. Thirty golfers readied themselves for the course at Chesley Oaks with an early tee time on Friday morning.

Though the forecast called for heavy rain, Friday began bright and sunny and remained so until early afternoon. With a shotgun start at 8 a.m., all teams were able to complete their rounds by early afternoon. Winners were announced during the luncheon sponsored by First Community Bank and ADS Security that followed the tournament. The team members of Jack Voelmle, Joe Cunius, John Tiesing and Paul Smith were the overall winners of the golf scramble tournament with the team of Charlie Maples, Ricky Bowling and Ottis Fairbanks coming in second.

Friday evening a social was held in the Saint Bernard Abbey Byre, where a buffet dinner was served. The overflow crowd enjoyed the evening despite the sound of tornado sirens as storms passed through the northern part of Cullman County.

Though rain and storms continued much of the day on Saturday, it did not dampen the spirit of the Saints on campus. Rising for an early start at 7 a.m., a small group of alumni participated in the 5K walk/run along the trails in the Saint Bernard forests. Later that morning, many alumni took advantage of the free admission to see Ave Maria Grotto.

At 11 am, Father Marcus Voss and Abbot Cletus Meagher held a town hall meeting in the Swisher Classroom Building. After the headmaster, Father Linus Klucsarits, was introduced to the alumni, he gave a brief report of the activities of the school during the recent academic year. Following his report, Father Marcus gave an update on the various projects underway on the campus this summer. These included the restoration of the quad located at the center of the campus, as well as the upgrade to the campus Wi-Fi System. Abbot Cletus concluded the meeting by speaking about the growth of the monastic community and the upcoming ordination of Brother Bernard to priestly orders.

Mass was celebrated in the Abbey Church at 5:30 p.m. with Abbot Cletus serving as the main celebrant. During his homily, he thanked the alumni for their dedication to and support of their Alma Mater.

Immediately after Mass, the annual Alumni Reception and Dinner was held in the Saint Bernard Dining Hall. Catered by Flik School Dining, the dinner was served by the young monks of Saint Bernard Abbey.

In his remarks after the meal, Father Marcus said, “Wonderful things are happening at Saint Bernard, needed improvements are being made and plans are being made for the future – in many ways, all this is possible because of you who are our alumni. Thank you for your financial support to us. Because of you, Saint Bernard can look forward to a strong and healthy future.”

A highlight of the evening was the recognition of the members of the 1968 basketball team who won the Alabama Collegiate Conference (ACC) Championship during the 1968 season. Fr. Marcus called the team forward and presented to them the same trophy they won at their championship game. With almost the entire team present, Joe LeMieux served as their spokesman and called each member forward to tell his own personal story. Joe Franey, assistant coach under Coach Charlie Richard, was also present and added his memory of the events of those days. At the conclusion, the team led the assembled alumni in a rousing rendition of “O When the Saints Go Marching in.”

After the dinner, alumni gathered for class photos in the Brahma Room and reminisced about their “good ole days at Saint Bernard.”

Saint Bernard annually hosts its Alumni Reunion and invites all alumni to mark their calendars for next year’s reunion which will be held the weekend of June 27-30, 2019.