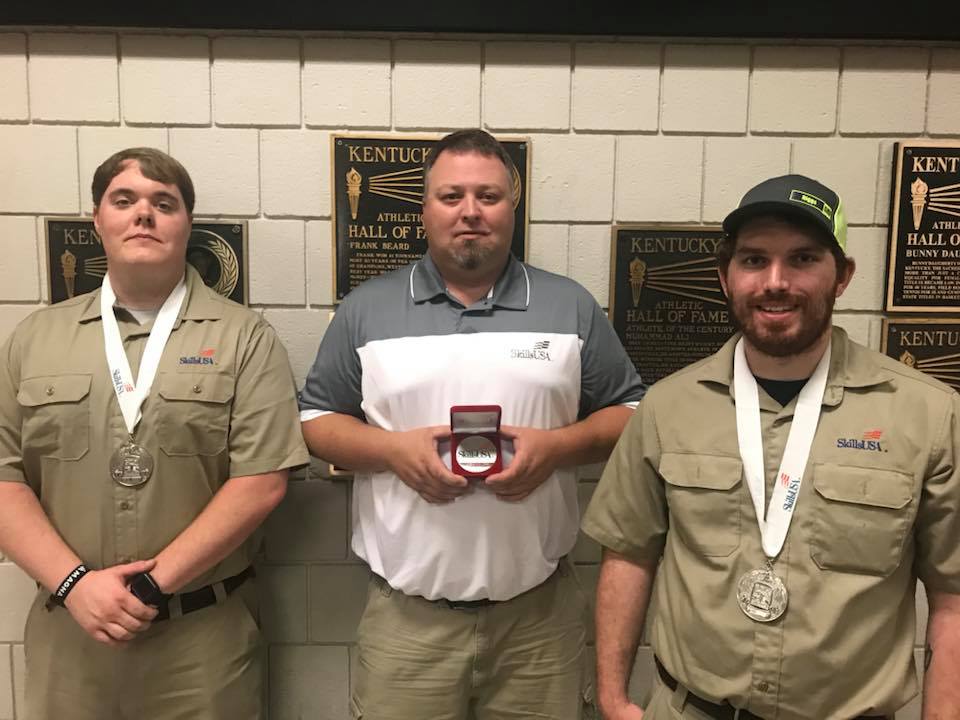 Steven Ballard, far left, and Landon Warnock, far right, won a silver medal in the Robotics and Automation Technology, a year after winning a bronze medal at the national event. They are pictured with instructor Keith Tolbert.

HANCEVILLE – Wallace State Community College students had a strong showing at the 54th annual SkillsUSA National Leadership and Skills Conference in Louisville over the weekend, bringing home three silver medals and a pair of bronze awards.

“Steven and Landon have worked hard all year. They had just completed the robotics class when they competed at nationals last year, so they were a bit more seasoned this year. They were fired up and ready to go,” said Wallace State’s Keith Tolbert, the Mechatronics and Electronics Technology program chair. “I’m very proud of their accomplishment. They’re already employees of Kamtek in Birmingham and will finish up their degrees this summer.”

Ernesto Rivera, a Salon and Spa Management student, won silver in the Cosmetology competition for Wallace State, becoming the highest national finisher for the program.

“We’re happy our students had a strong showing on a national stage. It’s great for Wallace State and Alabama, and it’s a testament to the high-quality training we offer here,” said Wallace State’s Dean of Applied Technologies Jimmy Hodges. “This was the first year for us to compete in computer science and the first time in history for Wallace State to place nationally in cosmetology and culinary arts. This is a tribute to the momentum we already have with SkillsUSA, and we anticipate even bigger things to come.”

Wallace State sent 24 students to the national competition. In addition to the silver and bronze medal winners, the college finished fifth in Automated Manufacturing; sixth in HVAC; seventh in Crime Scene Investigations, Mechatronics and Electronics Technology; eighth in Related Technical Math; 10th in Interworking and 14th in Computer Programming.

Wallace State graduate Maci Key completed her appointment as a SkillsUSA National Officer. You can watch her interview with a Louisville-based television station here: www.wave3.com/clip/14443475/skillsusa-returns-to-louisville-for-54th-year

SkillsUSA is a national nonprofit organization serving teachers and high school and college students who are preparing for careers in trade, technical and skilled service occupations, including health occupations. SkillsUSA serves more than 300,000 students and instructors annually. The organization has 13,000 school chapters in 54 state and territorial associations.