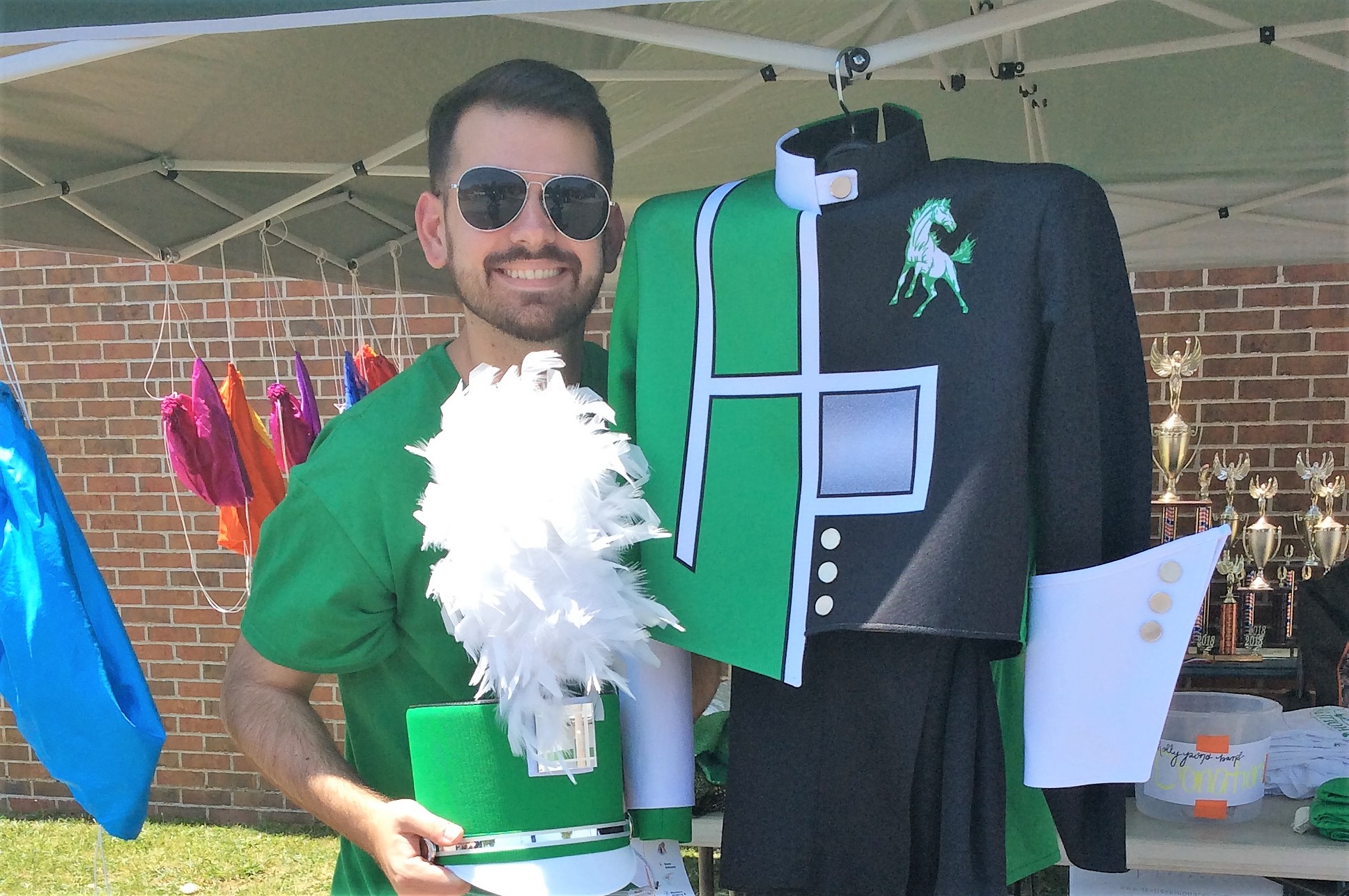 HOLLY POND – Wrapping up his first year at Holly Pond means planning and preparing for several years down the road for band director Evan Curtis. As part of his campaign to get new marching band uniforms – a $30,000 goal that he estimates will take at least a couple years – Evans organized a car show fundraiser this past Saturday. Along with classic cars, visitors enjoyed a bake sale and refreshment tents, could purchase old band T-shirts or color guard flags, or go down to the football field for games, face painting, or burgers at the concessions stand.

The bake sale stands featured homemade brownies, rice cereal treats, cookies and cakes made by auxiliary members and their families. The repurposed craft stand not only had T-shirts from previous band years and old flags from the color guard, but also sold yearbooks from as far back as 2006 and drawstring bags made from even more old flags. Down at the football field, there was a tent set up for prizes won at games like bowling or cornhole and a second tent for face painting, and the visitor-side concessions stand was open and selling savory foods like burgers, hotdogs and nachos for people who satisfied their sweet tooth at the bake sales.

When asked about future fundraisers, Curtis mentioned a majorette camp for kindergarten through fifth grade. The camp will help act as an introduction to twirling and will be held June 18-22. He also talked about the band’s traditional fundraisers, two chicken dinners and the golf tournament, and stated that he hopes to make the car show a new tradition. While most of the events held throughout the year will go toward general band maintenance or funding the band’s spring trip, the car show was specifically to raise money for new band uniforms.

This fall will be the 20th season for the current uniforms, and many of the students and parents agree that the age is obvious. Many of the jackets are missing buttons or snaps, have stains on the collars that won’t wash out, and have had seams taken in or let out more times than can be counted. The pants’ age isn’t as obvious, but years of hemming, letting out and dragging the ground has taken a toll.

“When I was in band, I’d complain all the time, ‘These uniforms are so old! These things have been here for nine years,’” Curtis recounted, “then when I got here I was like, ‘20 years old?!’ This isn’t just something where we want to get new uniforms because they look nicer, this is a desperate need.”

Curtis said donations are always welcome, saying the Bronco Band needs all the help it can get in this endeavor.