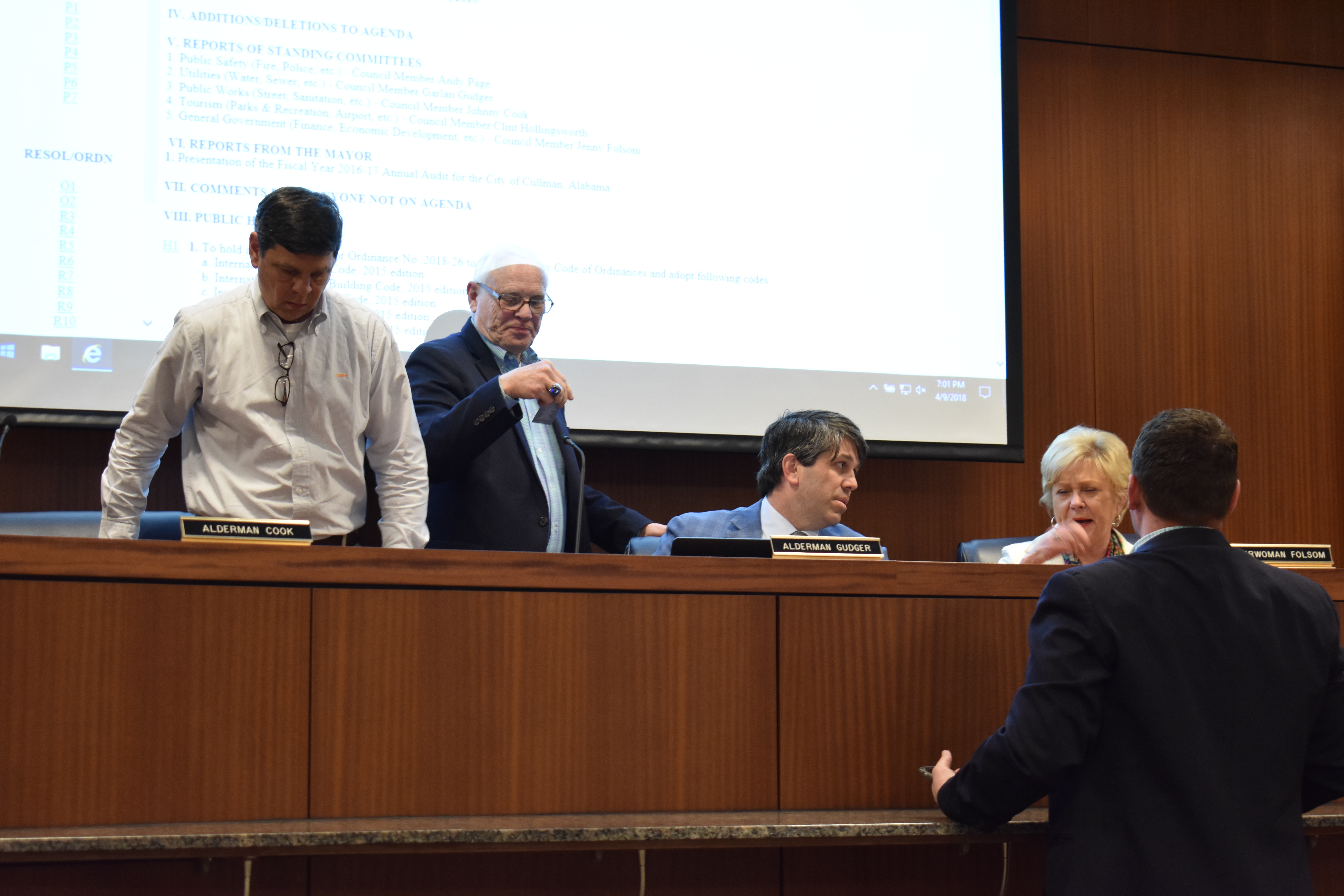 The Cullman City Council on Monday evening approved the extension date for the beginning of the construction of Academy Sports and Outdoors to July 1, 2020. / W.C. Mann for The Tribune

CULLMAN – On Monday evening, the Cullman City Council worked its way through a packed agenda that included receiving a $450,000 community improvement grant, a State of Emergency declaration to help victims of last month’s storms, and postponement of the construction of the much-anticipated Academy Sports.

The council passed a resolution declaring a state of emergency in the city of Cullman related to the March 19 hail storm.  The resolution will allow residents to place temporary housing such as RVs and campers on their property to continue to live close to their homes while repairs continue.  Through federal recovery programs, the declaration could help bring other assistance as well.

The council passed a resolution extending the commencement date for the construction of Academy Sports and Outdoors to July 1, 2020.  In March of 2017, the council agreed to $800,000 in cash incentives for the sporting goods retailer, with one of the conditions being that construction would begin within 360 days (www.cullmantribune.com/articles/2017/03/27/cullman-city-council-agrees-800k-cash-incentives-academy-sports-outdoors).  According to Academy’s Senior Real Estate Manager Marc Millis, who attended that council meeting Monday, the company had planned to begin construction in February of this year with a target opening date in September. That has now been pushed to summer 2020. The 62,000-square-foot facility will be located on an 8-acre lot on Lee Avenue Southwest.

The council voted to accept a $450,000 Community Development Block Grant (CDBG), administered by the Alabama Department of Economic and Community Affairs (ADECA), to complete improvements to Brunner Street on Cullman’s west side.

Gov. Kay Ivey awarded the grant in February. At the time, the Cullman Economic Development Agency’s Jamie Troutman said, “This award is for the second phase of the Brunner Street Neighborhood Revitalization Project.  It extends for two blocks along Brunner Street – from Denson Avenue (where Phase I stopped) to St. Joseph Drive. This project will consist of the same improvements as Phase I: Replacing water and sewer lines, storm water drainage, road repaving and sidewalks.  Construction is anticipated to begin this summer.

The council approved the following requests:

The council held a public hearing and first reading of an ordinance to amend the City Code of Ordinances and adopt the following codes:

The council suspended the rules of procedure to annex property owned by William and Shelia Sandlin located at 1710 Talley Ho Street SW (Cullman Bowling Center) into the city, at the owners’ request, on the first reading of the request.

The council also passed resolutions to:

The Cullman City Council meets at 7 p.m. on the second and fourth Monday evenings of each month at Cullman City Hall.  The public is invited to attend.