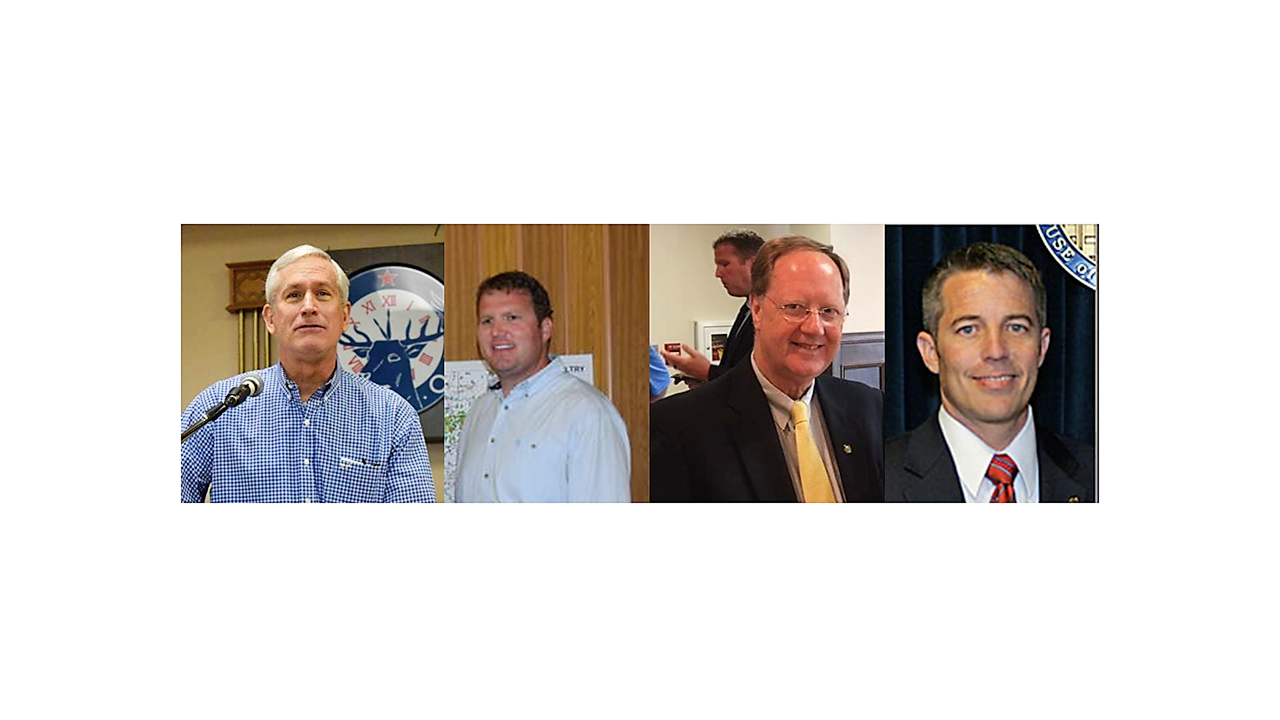 CULLMAN – As Alabama’s Legislature gets ready to begin the 2018 session, The Tribune took a peek at some of the bills that have already been filed and are waiting on legislators to arrive in Montgomery.

A note on definitions: Under the initial information on each bill, we indicated the party of origin for the bill.  The wording is taken mostly from the bills themselves, with additions by the Tribune to clarify certain points.  Where similar or related bills were pre-filed in both legislative houses, the Senate bill number was noted under the House bill explanation to avoid unnecessary repetition.

Existing law provides for the Deferred Retirement Option Plan (DROP), which contractually allows a member of the Employees' Retirement System (ERS) or the Teachers' Retirement System (TRS) to continue employment with his or her employer for a specific period of time, while deferring a portion of his or her retirement allowance until the end of the participation period, at which time the member withdraws from his or her service.  Existing law provides that participation in DROP is prohibited after March 24, 2011.

This bill would reopen participation in the DROP program and would further provide options for Tier I and Tier II members to participate in DROP.

A related bill, SB2, has been pre-filed in the Senate.

Under existing law, a person is strictly liable for civil damages for causing injury or damage to a person or a domestic animal of a person as a result of using traps or other similar devices on public land to take, capture, or kill a fur-bearing animal protected by state laws or rules.

This bill would limit the liability to injuries caused by traps or similar devices used on public land in violation of state laws or rules.

Under current law, a motor vehicle traveling at less than the normal speed of traffic is required to travel in the right-hand lane or as close to the right-hand curb or edge of the roadway as practicable.

This bill would specify that, on interstate highways and U.S. highways, a commercial motor vehicle having three or more axles would be required to travel in the right lanes unless passing or under certain other conditions.

Under existing law, in certain circumstances, a state may request a waiver from the U.S. Department of Agriculture of the work requirements that an able-bodied adult without dependents must comply with in order to receive assistance from the Supplemental Nutritional Assistance Program (SNAP).

A similar bill, SB4, has been pre-filed in the Senate.

Under existing law, there is no provision requiring unpaid or volunteer coaches and trainers affiliated with a child or youth athletic association or a political subdivision that conducts or sponsors sports or sports training activities to complete a course providing coaches and trainers with information regarding measures that can be taken to reduce the probability that a child or youth athlete will be seriously injured while engaging in youth sports activities.  This bill would require that any unpaid or volunteer coach or trainer affiliated with a youth athletics association of the state or a political subdivision of the state that sponsors or conducts any high-risk youth athletics activity where there is a likelihood that a child or youth may sustain a serious injury be required to take a course providing information to reduce those risks.  The law would apply to those working with sports programs for youth age 14 and younger.

Under existing law, a tenured K-12 or postsecondary education employee may not terminate his or her employment within the 30 calendar days' prior to the beginning of a school term and is required to provide five days' written notice at any other time.

This bill would delete the requirements for postsecondary education employees.  It would provide that the law applies to all K-12 teachers and would increase the time frame required for a teacher to give notice before terminating his or her employment at any other time of the year from five to 30 days.

A similar bill, SB14, was pre-filed in the Senate.

This bill would provide that a mandatory fee of $100 would be collected from an individual who successfully completes a pretrial diversion or deferral program in a municipal, district, or circuit court if the individual was charged with driving under the influence.

(The Alabama Memorial Preservation Act requires local municipalities to get state permission before moving or renaming any historically significant building or monument 40 years old or older.)

Under existing law, certain entities and government agencies are exempt from the Alabama Memorial Preservation Act of 2017.  This bill would authorize any municipality to opt out of the provisions of the act upon vote of the governing body of the municipality.

A related bill, SB11, pre-filed by a Republican in the Senate, would exempt all preK-12, postsecondary, and higher education institutions and facilities from the Alabama Memorial Preservation Act of 2017, allowing those with controversial names (memorializing an event, person, group, movement, or military service) to be renamed.

This bill would require the Governor to appoint a person to a vacancy in the office of United States Senator and issue a writ of election to fill the office for the remainder of the term at the next general election occurring more than one year after the vacancy occurs.  The bill would also provide that if the vacancy occurs within 76 days of the general election immediately before the end of the term of the office, the election would proceed and if the incumbent received the most votes, there would be a vacancy in the office, to be filled by appointment of the Governor.

(If already a law, this would have kept Luther Strange in Jeff Sessions’ vacated Senate seat until the 2018 election.)

A similar bill, SB18, was pre-filed in the Senate.

A related pre-filed Senate bill, SB15, would provide that “a vacancy in either the House of Representatives or the Senate that occurs with less than two years remaining in the term would be filled by a person qualified to hold the office and appointed by the Governor,” and “also would provide that a person appointed to the vacancy is not eligible to run for the office in the election for the next full term for the office.”

This bill would establish the Alabama Physician Initiative.  This bill would provide scholarships for certain medical students who are enrolled in and attending any college of medicine in Alabama and who contract with the Alabama Medical Education Consortium to practice for five years after the completion of their residency in rural areas of the state with the greatest need for physicians with funds allocated through the State Department of Public Health.

This would phase in the provision of 100 scholarships per year beginning with 25 scholarships in academic year 2018-2019 for certain medical school students enrolled in and attending a college located in Alabama and who commit to practice family medicine in rural areas of the state with the greatest need for physicians.

HB21 – allow hunting deer and feral swine by means of bait, with a state-issued permit

Under existing law, by regulation of the Department of Conservation and Natural Resources, as it relates to hunting deer on private lands, there is a rebuttable presumption that any bait or feed located beyond 100 yards from the hunter and not within the line of sight of the hunter is not a lure, attraction or enticement to, on, or over the areas where the hunter is attempting to kill or take the deer.

This bill would allow the taking of whitetail deer or feral swine by means of bait when a person purchases a baiting privilege license from the Department of Conservation and Natural Resources.  The permit would cost $14 plus a one dollar issuance fee, and would allow hunting on baited fields within privately owned or leased hunting lands.

A similar bill, SB22, was pre-filed in the Senate.

This bill would provide that a person is not criminally liable for using physical force, including deadly force, in self-defense or in the defense of another person on the premises of a church under certain conditions.  Among general conditions that apply to many other locations as well, a church-specific clause removes criminal liability for the use of force against a suspect “using or about to use physical force against an employee, volunteer, or member of a church or any other person authorized to be on the premises of the church when the church is open or closed to the public while committing or attempting to commit a crime involving death, serious physical injury, robbery, kidnapping, rape, sodomy, or a crime of a sexual nature involving a child under the age of 12.”  A hearing must be conducted to make sure the conditions were met.

Existing law provides for certain benefits, including insurance coverage, disability, and workers' compensation, for any active city or state firefighter who has an occupational disease, including cancer, which manifests while the firefighter is employed with the city or the state.

SB3 – expand locations in which firearms may be carried, and repeal rules requiring permits for concealed carry

The bill would allow carrying without restriction or need of a permit in wildlife management areas, on private property, and at public demonstrations or gatherings.  It would, additionally, reduce the penalty for carrying a gun while committing a crime, and allow concealed carry and vehicular transport of loaded firearms without a permit.

Under existing law, there is no provision to allow for the administering of certain investigational stem cell treatments to patients with severe chronic diseases or terminal illnesses.  This bill would provide for the availability of stem cell treatment options for certain patients with terminal illnesses or severe chronic illnesses under certain conditions.

This bill would provide for fiscal year 2017-2018 a funded one-time lump-sum payment in the amount of $400.00 to each person whose effective date of retirement for purposes of receiving benefits from the Teachers' Retirement System is prior to October 1, 2016, and who is receiving or is entitled to receive a monthly allowance from the Teachers' Retirement System on September 30, 2017.

If enacted into law, the terms of all current board members will end as soon as a new Director and Board of Counsel can be appointed.

This list is not exhaustive.  For a detailed look at all pre-filed legislation, visit http://alisondb.legislature.state.al.us/Alison/SessPrefiledBills.aspx and https://legiscan.com/AL.