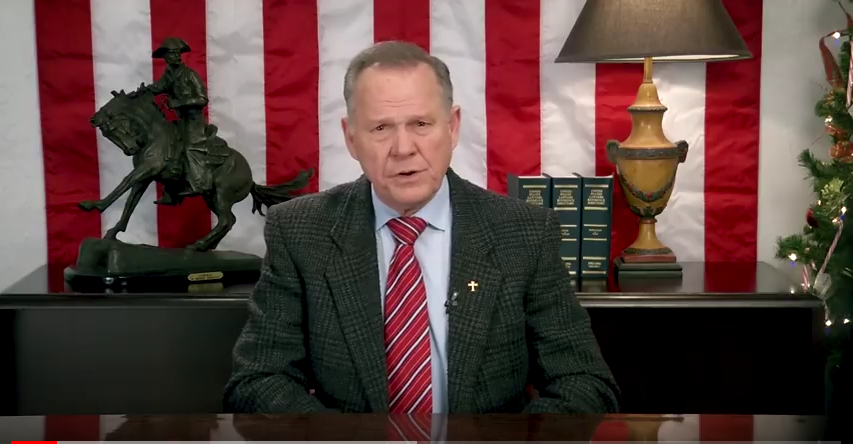 "Tomorrow, my wife and I will celebrate our 32nd wedding anniversary.

I want to thank her and all my family, for standing with me through this long and arduous campaign.

And of course, I want to thank all of you who have stood with me in this very important battle for the future of our country.

We are indeed in a struggle to preserve our republic, our civilization, and our religion and to set free a suffering humanity. And the battle rages on.

In this race, we have not received the final count to include military and provisional ballots. This has been a very close race and we are awaiting certification by the Secretary of State.

This particular race was watched not only by the people of this state, but by the entire nation, and many around the world.

Why? Because I believe the heart and soul of our country is at stake.

Like most Americans I am concerned about the future of our country – both financially and morally.

After the election of Donald Trump, a little over a year ago I saw a window of hope and an opportunity that we could return to our founding principles and the Constitution of the United States which has governed us for over 200 years.

Our forefathers recognized in the Declaration of Independence that all men and women are created equal and endowed by our Creator with certain unalienable rights, that among these are life, liberty and the pursuit of happiness.

That American Dream has today been tainted by corrupt politics, and a government which is become out of control and out of touch with the people. Many do not share the vision of those who built this country.

Today, we no longer recognize the universal truth that God is the author of our life and liberty.

Abortion, sodomy, and materialism have taken the place of life, liberty and the pursuit of happiness.

In the words of Abraham Lincoln: "We have been the recipient of the choicest bounties of Heaven. We have been preserved in many years in peace and prosperity, we have grown in number, wealth and power, as no other nation has ever grown, but we have forgotten God. We have forgotten the gracious Hand which preserved us in peace and multiplied, enriched and strengthened us and we have vainly imagined in the deceitfulness of our own hearts that all of these blessings were produced by some superior wisdom or virtue of our own."

We have stopped prayer in schools.

We have murdered over 60 million of our unborn children.

We've redefined marriage and destroyed the basis of family, which is the building block of our country. Our borders are not secure. Our economy is faltering under an enormous national debt.

We have a huge drug problem.

We've even begun to recognize the right of a man to claim to be a woman, and vice versa.

We have allowed Judges and justices to rule over our Constitution, and we have become slaves to their tyranny.

Immorality sweeps over our land.

Even our political process has been affected with baseless and false allegations which have become more relevant than the true issues which affect our country.

This election was tainted by over $50 million dollars from outside groups who want to retain power and their own corrupt ideology.

No longer is this about Republican or Democratic control. It's truly been said that there is not a dime's worth of difference between them. It's about a Washington establishment which will not listen to the cries of its citizenry – and the battle rages on.

Together we must stand against those who would take from us our country.

In the words of the Holy Scriptures: "We wrestle not against flesh and blood, but against principalities, against powers, against the rulers of the darkness of this world, against spiritual wickedness in high places. Wherefore, take unto you the whole armour of God that you may be able to withstand in  evil day and having done all, to stand."

The sacrifices of brave men and women throughout our history cry out to us, the living, to be dedicated here to the unfinished work for which many of them gave the ultimate sacrifice.

"Let us here highly resolve that these dead shall not have died in vain, that this nation under God shall have a new birth of freedom, and that government of the people, by the people and for the people shall not perish from the earth."

Thank you. Merry Christmas! And may God bless you."