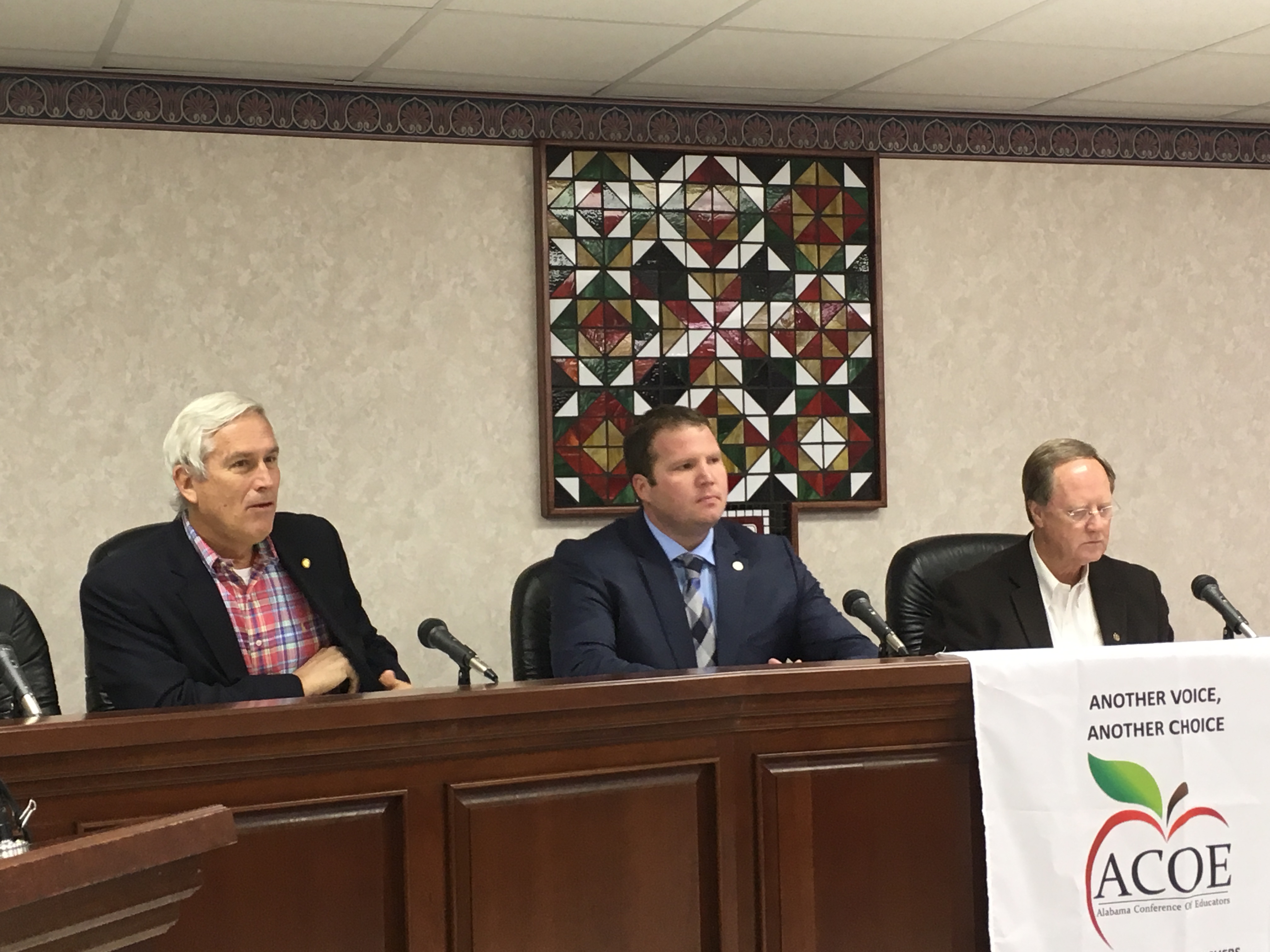 ACOE is a professional organization for Alabama teachers and support staff, established in 2001 by Alabama teachers as an option to established groups like the Alabama Education Association (AEA). It offers its members several benefits, most notably legal assistance and a $1 million liability policy.

ACOE Executive Director Terry Slone explained the evening’s event: “We’re here tonight because it’s important that educators be involved in legislation, know what bills are being proposed that affect education, be able to speak with their representatives; so this is an effort to bring the educators and the legislators together for a dialog of what’s coming up in the next legislative session, and also to let our members express to their legislators the items of importance to them.”

The most recent teachers’ pay raise was, according to ACOE, offset by an increase in PEEHIP premiums that resulted in no net increase on educators’ paychecks, resulting in a lawsuit.  The legislators were asked to address the funding of PEEHIP.

Bussman responded that the legislature has always paid whatever PEEHIP requested, and that it was PEEHIP’s after-the-fact decision to raise premiums beyond what it had requested.  He referred to the move as a “cheap shot,” and said that he would work to continue funding whatever the program requests.  He also expressed concern about the possibility that PEEHIP’s move was conducted illegally behind closed doors, saying that if official business was conducted in secret, “there should be some consequences for that.”

Harbison concurred with Bussman, adding that the benefits of all state and local government employees should be protected, as those benefits are often the most attractive draw of jobs.

“We know it’s definitely not for the pay,” he noted.

Shedd also agreed that full funding of education should be a legislative priority, and noted that healthcare is a “mess” at all levels at present.

All three legislators emphatically stated opposition to changes to the system, pointing out that such a plan would affect all employees in the state whose retirement plans are through Retirement Systems of Alabama (RSA).

Shedd, who led a fight against such a plan in a recent session, said, “Rest assured: if this comes up again, I will drop whatever I’m doing.  I will lead the effort, or I will push from behind, either one, whatever it takes to protect the retirement system.”

Will there be a pay raise for educators on the table in the next legislative session?

Shedd said that discussions about raises are underway, though amounts have not been determined.  He offered that he would work toward the highest raise possible, saying, “In Montgomery, legislation is no different than trying to trade cars: you just try to get the best deal you can get.”

Bussman stated that senators are also talking about teacher raises, but was also unwilling to speculate on amounts; he did, though, say that he would support a plan that fixed last year’s PEEHIP problem.

He also took time to comment on chaotic conditions at the Alabama State Department of Education, stating the department is “completely out of control.  They have no idea what they’re doing.”  He spoke about a goal of moving money from the state level down into local school systems to circumvent the problems in Montgomery.

Harbison said that decreases in pay due to benefits issues are unacceptable, and supported raises, but called for caution in raises, noting that overextension in one year could lead to cutbacks and layoffs in the next.

This plan, previously dropped, is up for renewed consideration in AL SB2 and AL HB1 in the upcoming session.  Bussman immediately voiced opposition, noting that the previous plan had been open to too much abuse.  He said he might consider a version of the plan for teachers, as long as abuse of the system could be kept in check.  Harbison agreed with the senator, expressing concern that something like the old plan could bankrupt RSA.  Shedd spoke positively about his personal knowledge of the author of the House version of the bill, and noted that RSA has shown support for the new plan.  His tone remained cautionary, though.

Alabama teachers are currently required to give only five days’ notice of their resignation, if they leave during the school year.  A bill coming up in the 2018 session would extend that requirement to 30 days.  All three legislators admitted to not being familiar with the bill, but opposed the idea, at least on its surface.

Harbison summed up their shared opinion: “If they don’t want to be there, I don’t think we want them there.”

Shedd said that they would have to look further into the bill before making a final decision about it.

All three legislators voiced support for the idea.  Shedd noted past problems with cost of living adjustments, but said he would support anything the legislature could do to help retirees.

Bussman said that he would need to talk to the bill’s author, Sen. Dick Brewbaker, R-Montgomery, to find out the reasons for the proposal before making a decision on the issue.  He did say that Brewbaker was a strong supporter of education who usually had good reasons for his proposals.  Harbison said that he could support such a plan, and Shedd expressed confidence in the author of the House version of the bill, Rep. Isaac Whorton, R-Valley.

The state board of education offers $5,000 stipends to teachers seeking optional National Board Certification, but not to speech pathologists. who are required to get advanced degrees and certifications.

The legislators said they would need to look into why speech pathologists have been excluded from such stipends, but said that benefits extended to certain teachers should be extended to all.