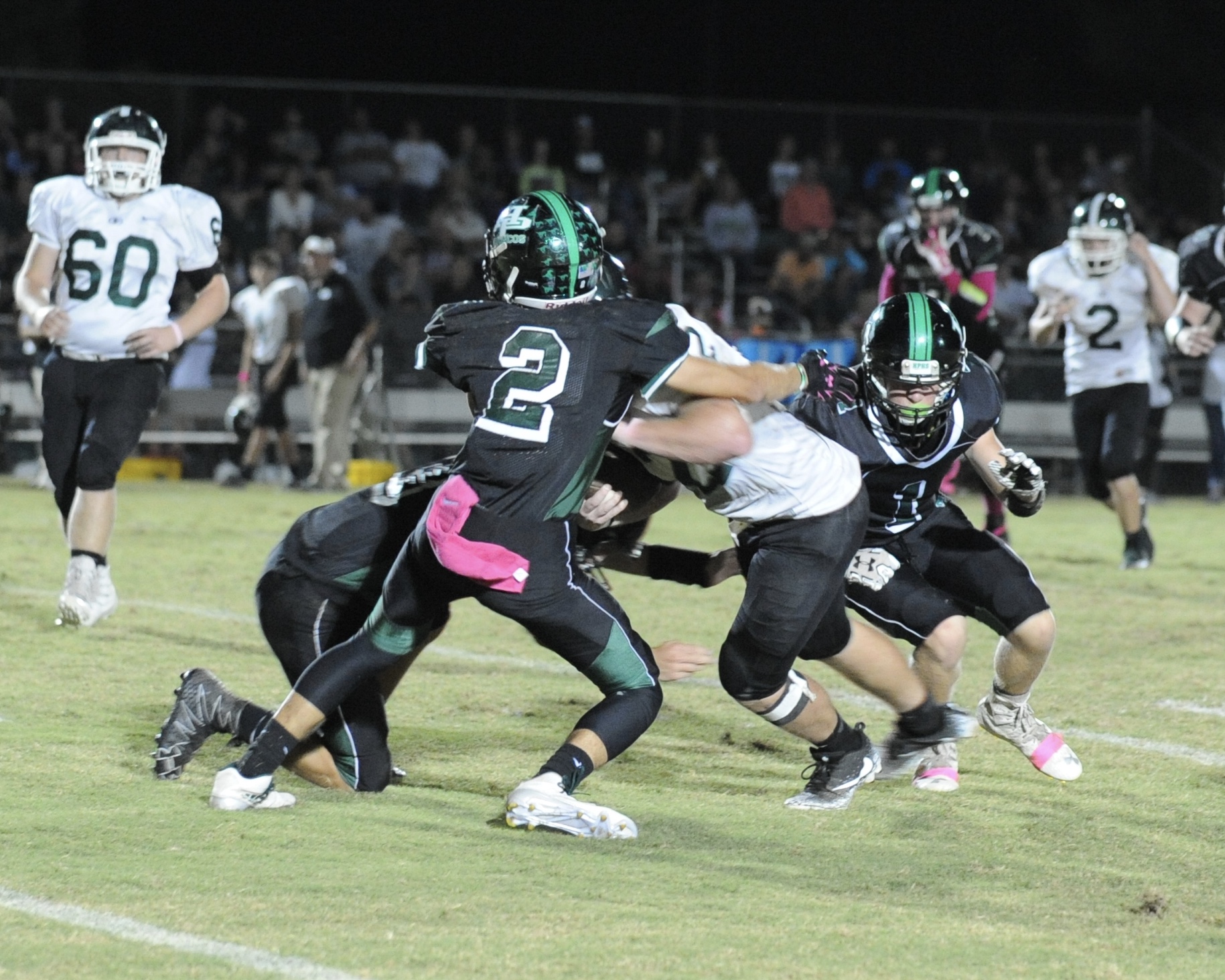 HOLLY POND – Holly Pond looked to inch one step closer to a play-off berth as the Broncos hosted Locust Fork in their homecoming game Friday night. But turnovers turned out to be their undoing, four for the night, and they fell to the Hornets, 20-8.

Holly Pond struck first off a Hornet fumble when Kyler Chaney recovered the ball and returned it 35 yards for a touchdown to put Holly Pond on the scoreboard. After a good 2-point conversion, the score was 8-0 with 6:40 remaining in the opening quarter.

Both defenses stepped up for the majority of the first half, but off a failed fourth-down conversion by the Broncos, Locust Fork took over and embarked on an amazing 18-play drive that ended with a 5-yard touchdown run by Drew Rogers with 3:32 remaining in the first half. The Hornets took an 8-7 lead, which ended up being the score at the half.

Both teams continued to play stifling defense through most of the third. Holly Pond looked to take the lead, though, after forcing a Locust Fork punt. The Broncos started at the 43-yard line, and on a third-and-13 from the 40, the Broncos tried some trickery when Chaney pitched it to Brody Rowell, who then threw it to Isac Ludwig for 41 yards, which put them at the 19-yard line and eyeing the end zone. After a Chaney 7-yard run on first down, they got stuffed, and a critical penalty on fourth-and-1 from the 11-yard line hurt them badly. Holly Pond turned the ball over on downs on the next play.

The Hornets took over on the 16-yard line, and Rogers was a handful, getting 29 yards on four carries. Jarett Peeples had a 9-yard gain on a sweep in the series, and caught a pass for 28 yards, which put them at the 7-yard line, and after they got called for a personal foul on the next play, Locust Fork scored on a 21-yard run up the middle by Benjamin Oden to give the Hornets a 14-8 lead with 1:14 remaining in the third quarter.

Holly Pond looked to get the lead right back on its next series. The Broncos faced a third-and-6 from the 36-yard line, and Chaney got leveled late after a hit, which gave them a first down at the 49, but they couldn't do much after that, and they looked to fake a punt, but they fumbled the ball, and the Hornets recovered.

Holly Pond forced them to punt and the Broncos got the ball back with 7:34 remaining in the game. But the offensive line couldn't protect Chaney; the Hornets got a sack and forced a Chaney fumble two plays later, and Douglas Umland recovered the loose ball for Locust Fork at the 35-yard line. Rogers scored on the first play on a 35-yard run, getting in untouched to push the Hornets’ lead to 20-8 with 4:16 remaining in the game.

Holly Pond tried to start a comeback late and moved the ball well, but the series and the game ended with an Oden interception.

The Broncos fall to 7-14 all-time against the Hornets, being defeated for the second straight year.

Rogers finished with 105 yards rushing on 16 carries and two touchdowns. Michael Clevenger went 5-of-10 for 49 yards. The Hornets improved to 3-4 on the season and 3-1 in region play; they will head back home to take on Cleveland next Friday.

Chaney had 62 total yards on the night for Holly Pond, and he had the Broncos’ only touchdown of the night. They finished with 223 total offense (158 rushing and 65 passing). The defense played hard and they held the Hornets to just 219 yards, but turnovers hurt them, as three of them came in the final quarter.

The Broncos fell to 4-2 on the season and 1-2 in the region. They will travel to Hanceville next week in an important region game as they look to inch one step closer to a play-off berth.

Coach Mike Bates acknowledged the mistakes made in the game and applauded the hard work by his defense in the game, saying they'll come back next week.