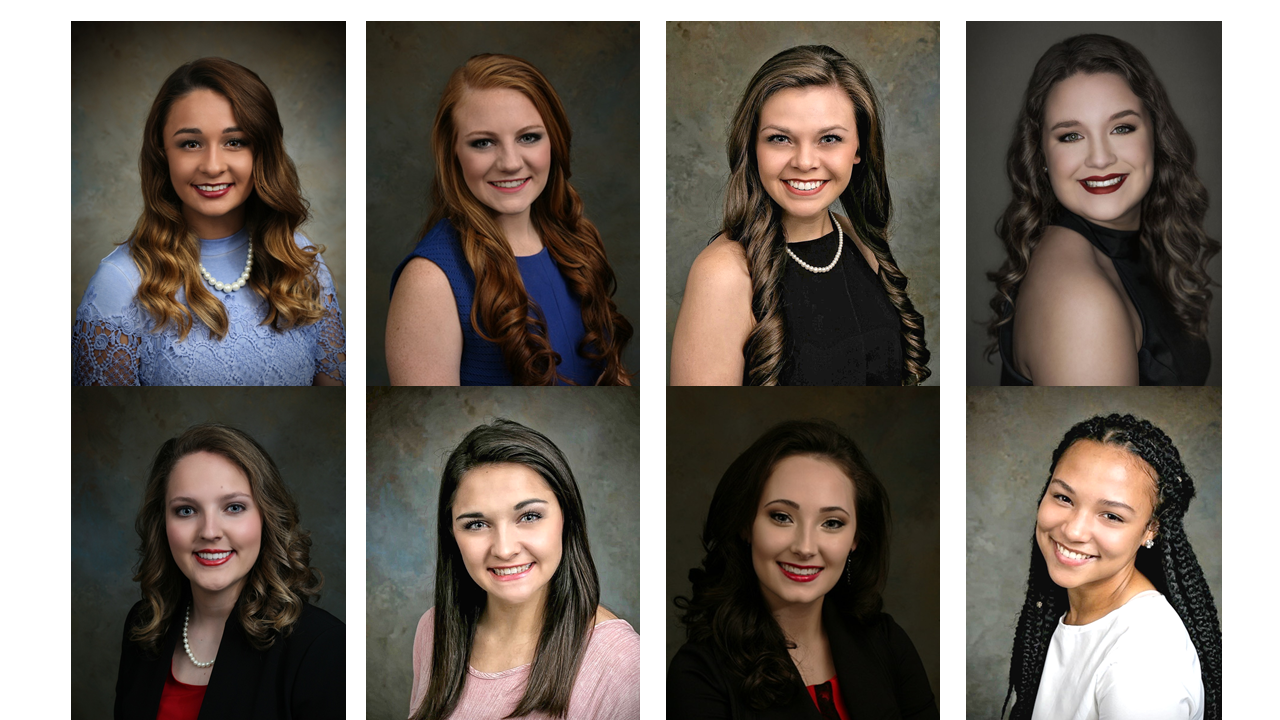 Representatives of the eight public high schools in Cullman County will compete on an equal basis for a $3,000 scholarship award (paid to the school in which she enrolls) given by the Cullman County Fair Association. The winner also receives a diamond pendant from Doug Doggett Jewelers of Cullman. The first alternate receives a $2,000 scholarship; in the event the winner is unable to fulfill any of her duties, the first alternate will serve in lieu of the Queen. The second alternate receives a $1,000 scholarship. Wallace State Community College gives a one-year scholarship in the field of performing arts to the winner of the talent portion of the contest. The Cullman Lioness Club awards $200 to Miss Congeniality. Lion Thomas Warhurst will emcee the pageant.

The eight contestants are:

Ms. Savannah Aaron, 17, is representing Cold Springs High School. Aaron, who is 5’1” with brown hair and hazel eyes, is the daughter of Tanya Aaron and Jeremy Aaron.

Savannah’s hobbies include cheerleading, dancing, volunteering, club activities and spending time with her friends and family.

Ms. Aaron will perform a jazz routine to Christina Aguilera’s “Diamonds are a Girl’s Best Friend.”

She is the Cold Springs senior class president and co-captain varsity cheerleader, is a member of the SGA and LEO Club, and is an FCCLA state medalist and UCA All-American Cheerleader. With UCA Camp Champions she performed at the Buffalo Wild Wings Citrus Bowl in Orlando, Florida, receiving an invitation to try out for the UCA staff. She also volunteers at H.O.P.E. Horses, The Crossing and the community outreach clothing program at Cold Springs High School.

Savannah plans to attend the University of South Alabama to obtain a degree in sports physical therapy.

Ms. Haylee Dauphin, 17, is representing Cullman High School. Dauphin, who is 5’9” with brown hair and green eyes, is the daughter of Danielle Dauphin and Gary Dauphin.

Haylee’s hobbies include dancing, singing, working in her church’s nursery, swimming and baking.

Ms. Dauphin will sing a medley of “Come in from the Rain” and “Stormy Weather.”

She is in LEO Club, FCCLA, has played in her school’s band for four years, served three years on dance line, is dance line captain, received superior ratings at marching competitions, and was Cullman High School’s Fair Queen talent winner.

Ms. Averie DeAnn Harris, 17, is representing Fairview High School. Harris, who is 5’2” with red hair and hazel eyes, is the daughter of Brad and Kristy Harris.

Ms. Harris will sing “Part of Your World” from “The Little Mermaid.”

Averie plans to attend Wallace State Community College for two years to earn her associate degree before transferring to Athens State to pursue a degree in elementary/collaborative education.

Ms. Ally Peyton Knight, 18, is representing Good Hope High School. Knight, who is 5’2” with dark brown hair and green eyes, is the daughter of Jacob and Cindy Knight.

Ms. Knight will be performing an original song she wrote and composed entitled “The Problem with Girls.”

Ally plans to attend Wallace State Community College to earn her associate degree before transferring to the University of North Alabama to pursue a degree in business with a minor in music. Her goal is to one day work in Nashville in the music industry.

Ms. Serah Hudson, 17, is representing Hanceville High School. Hudson, who is 5’0” with brown hair and brown eyes, is the daughter of Wayne and Sherri Hudson.

Serah plans to attend college to pursue a degree in social work.

Ms. Gracie Alexis Thomas, 17, is representing Holly Pond High School. Thomas, who is 5’1” with brown hair and green eyes, is the daughter of Jed and Amber Thomas.

Ms. Thomas will sing “House of the Rising Sun.”

She is a member of the varsity volleyball team, FCA, FCCLA, SGA, FBLA, Key Club and Beta Club and performs in the choir and ensemble.

Gracie plans to earn a degree in criminal justice from Jacksonville State University so she can later become a juvenile probation officer.

Ms. Hillary Holcomb, 17, is representing Vinemont High School. Holcomb, who is 5’6” with brown hair and blue eyes, is the daughter of Heath and Emily Holcomb.

Hillary’s hobbies include playing the piano and trumpet, reading, watching Netflix, volunteering with the “Back Pack Program,” and entertaining residents at her local nursing home, along with baking and cooking.

Ms. Holcomb will perform a medley of Floyd Cramer songs on the piano.

Hillary plans to attend the University of North Alabama and play in the “Pride of Dixie” Marching Band while pursuing a biomedical engineering degree. After completing college, she plans to work at UAB Hospital to help change the lives of others.

Ms. Raven McKenzie Gilliland, 17, is representing West Point High School. Gilliland, who is 5’2” with dark brown hair and green eyes, is the daughter of Loren Gilliland and Greg and Toni Jenkins.

Raven’s hobbies include going to church, tumbling, cheerleading, riding horses and spending time with her friends and family.

Ms. Gilliland will perform a dancing and tumbling routine.

She is a member of FCCLA and a is varsity cheerleader.