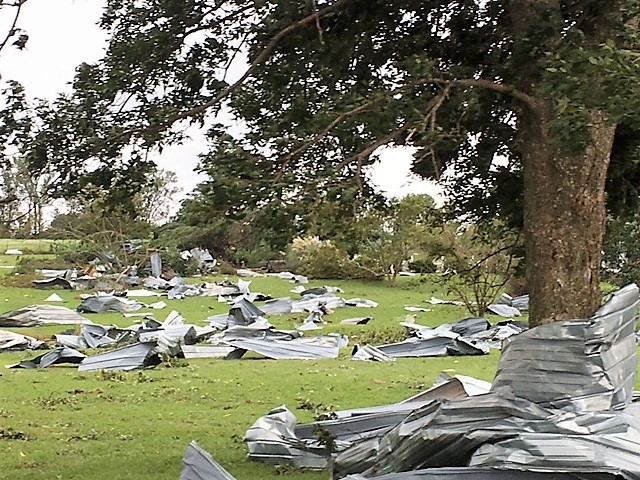 HOLLY POND – The National Weather Service in Huntsville (NWSH) confirmed late Friday afternoon that it was an EF-2 tornado that caused the damage in Cullman and Marshall Counties Thursday night, saying the hardest hit areas were Holly Pond and Baileyton.

NWSH reported that the tornado traveled 13-and-a-half miles, carving a 300-yard-wide path in some areas, with maximum winds of 115 mph.

NWSH staff, surveying storm damage on the northeast side of Holly Pond Friday morning, made a preliminary statement that the damage was very likely caused by a small tornado.  Several area farms were hit in a line of severe damage over a half mile in length.  Farms and homes around County Roads 1716, 1732, 1735 and 1728 were hit hard, with reports to the Cullman Emergency Management Agency (CEMA) of incidents along Alabama Highway 67 indicating that some amount of damage extended several miles to the north.  Isolated reports of damage came from other areas as well.  Trees were down in many places, and a few utility lines were down.

The Tribune traveled with CEMA and NWSH to tour a few of the stricken areas.

Andy Kula from NWSH said of the weather event, “It looks tornadic, just based on the path and some of the radar trends I looked at before we got here.  There was some rotation in the area.”

Kula stated that the line and extent of destruction, along with the nature of the damage which he described as “pretty chaotic,” was more indicative of a tornado than a straight-line or microburst wind event.  If the event was a tornado, he shared, it was likely a small F-0 or F-1, though final damage reports could see that raised to an F-2. We now know it was an F-2.

Miraculously, no injuries were reported.

The tornado appears to have touched down first at Chambers Farm off County Road 1732, where multiple chicken houses suffered extreme damage.  The property owner spoke with The Tribune briefly, mainly expressing relief that no people had been caught in the destruction.  He declined to be interviewed, frustrated with the media and explaining that an individual claiming to be a reporter from another news agency had illegally entered his property early Friday morning, shooting video and pictures within the wreckage without permission, and continuing to take pictures after being told to leave.  The Tribune agreed to take no pictures or recordings on the property, and photographed scenes visible from public roads.

CEMA Director Phyllis Little planned for a busy day and evening ahead.  As she prepared to leave for the CEMA warehouse to pick up a truckload of tarps, she shared, “We’ll provide any kind of assistance we can.  We’re limited in what we can do.  From what I’ve seen, there’s an awful lot of damage, and it’s a disaster for our local folks.  It’s a disaster for me as the EMA director, but this will not warrant any kind of federal assistance, and the State of Alabama does not have any kind of disaster assistance fund, so we’re pretty much on our own with this disaster.  All disasters start local and end local, anyway.

“My job right now: I’m going to head back to Cullman.  We have a warehouse with some tarps stored in it.  I’m going to get some help and load as many as I can on the back of the truck, and bring those back out here for anybody that needs them.”

“We’ll do whatever we can.  (Cullman County) Commissioner (Kerry) Watson has been out here this morning, and so has Commissioner (Garry) Marchman, and I’ve spoken with Commissioner (Kenneth) Walker by phone.  I’m sure he’ll be out here, if he’s not already.  The County is willing to offer any assistance they can.  We’ll try and put people in touch with whatever resources we can.”

For those who need disaster assistance