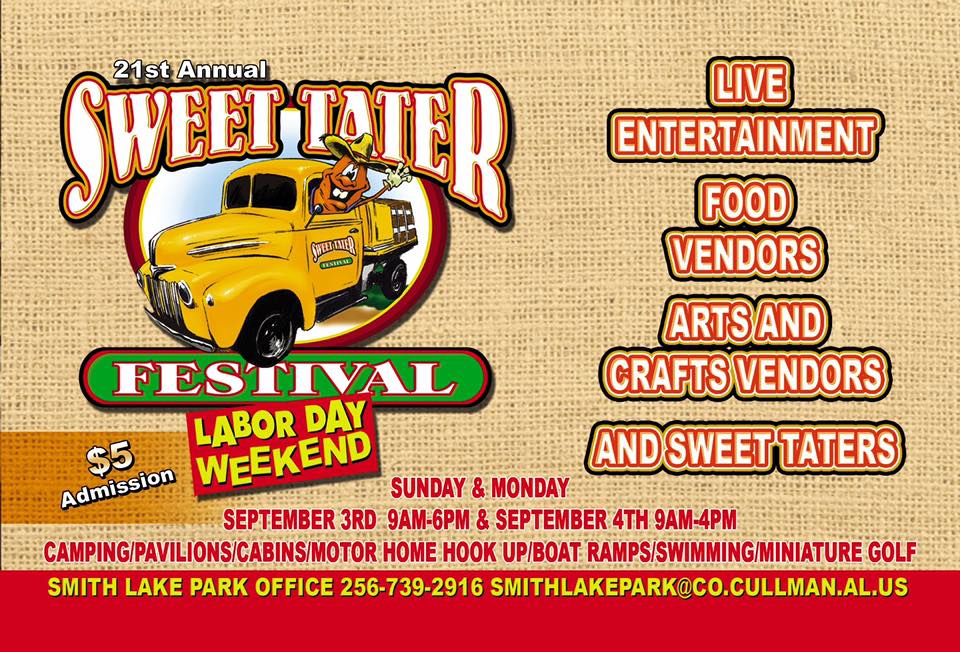 The event, which lasts for two full days, costs just $5 for admission, not including camping fees if those attending want to bring a tent or a recreational vehicle.

“It is just an enjoyable couple days at the park,” said Doug Davenport, director of Cullman County Parks and Recreation.

The two days will be packed with events and contests such as a golf-cart parade, with the best in show being awarded prizes that are yet to be announced

“There is also going to be the second year of a sweet potato pie eating contest sponsored by Bojangles, and a Pepsi-chugging contest, and Pepsi donates all the drinks for that event too,” said Davenport.

The park recently completed what Davenport says is the largest Pepsi can in the country. The department worked with Pepsi Cola of Cullman, who painted the old, non-functioning water tower next to the Smith Lake Park office building to look like a Pepsi can.

“It is 32 feet tall, and we are pretty sure that is the biggest in the country. We only know of two others that even exist, and ours is bigger than those,” he said. “We’re trying to get in the Guinness Book of World Records for that.”

Along with the contests and the natural scenery of Smith Lake Park, there will be as many vendors’ booths, if not more than last year’s number of 137.

There will also be the annual car show at the event, which Davenport thinks had a bad turnout last year because of the threat of rain.

Davenport anticipates around 7,000-8,000 people will attend the event each day.

“When we moved the event to Smith Lake Park several years ago the potential for the event just grew,” he said. “We just try to provide different events and things that people can get involved with and excited about.”

Davenport, after doing some research about the event, stated that it was initially named the Sweet Tater Festival because at the time of its inception Cullman was the no. 10 sweet potato producer in the United States.

There will be live entertainment for both days of the event.

“In previous years we have arranged the acts and set it all up ourselves, but this year we hired professionals, so you’ll see that it is a little beefed up from years past,” Davenport said.