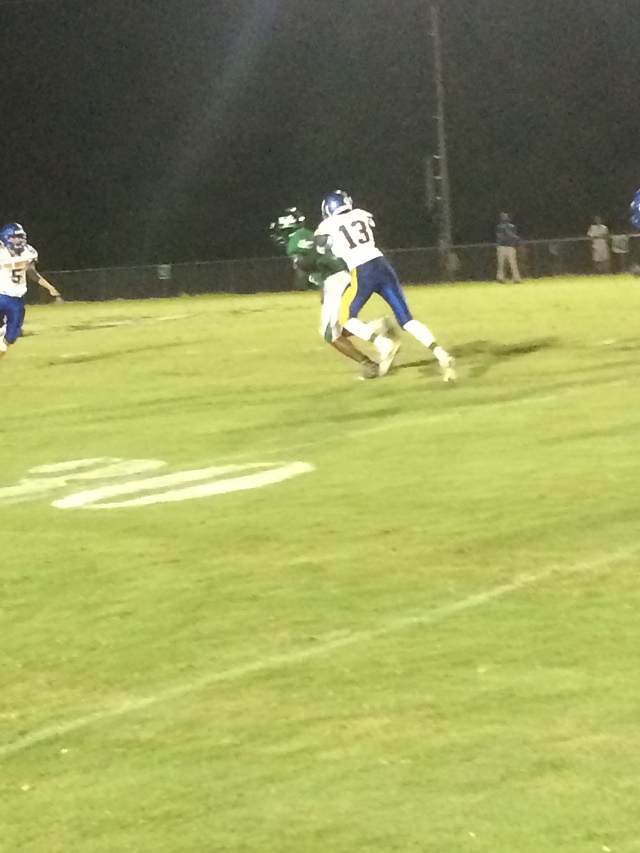 HOLLY POND –   Holly Pond hosted a much-improved Coosa Christian team on Friday night. The Broncos won the toss and chose to receive the ball, and for good reason, as they marched down the field on the legs of a stable of running backs. They got a huge break as they recovered a bad snap to maintain possession. A few plays later Brody Rowell ran the ball in from 23 yards out, and Jeremiah Holmes made the 2-point conversion by running the ball and diving across the goal line, giving the Broncos an early 8-0 lead, taking only four minutes off the clock.

Coosa Christian had a promising drive going but eventually a few penalties stalled it. Holly Pond didn’t find it as easy on the second offensive possession, due to several negative plays. Like their first offensive possession, Coosa Christian had three straight false start penalties backing the Crusaders up close to their own endzone. Holly Pond got the ball back but couldn’t move it due to the stout Crusader defense.

Coosa Christian found their stride on offense when Caiden Lipscomb hit Evan Delp for a 67-yard touchdown pass with 5:14 to go in the second to make the score 8-6 after missing the extra point. The Broncos quickly answered back with a 10-yard run by Connor Belyeu with 3:15 to go until halftime to make the score 14-6. The Bronco defense gave their offense another chance to put more points on the board before halftime. The first play after the punt Rip McBee took into the endzone from 40 yards out pushing the lead to 22-6 after Kyler Chaney tacked on the 2-point conversion with 1:39 remaining in the half. An interception by Holly Pond’s Isaac Ludwig summed up the first-half woes for the Crusaders.

Five plays into the third, Gabe Fortner intercepted the ball giving the Bronco defense their second interception of the night. After converting on fourth down to keep the drive alive, Rowell punched it in from 10 yards out for his second touchdown run of the game, stretching the lead to 28-6 with 5:34 remaining in the third. Holly Pond recovered an onside kick, but the Coosa Christian defense came up huge when Dartavious Britton intercepted the ball to give back to the Crusader offense. Unable to muster up any offense, the Broncos and Crusaders swapped possessions. The offensive woes continued for the Crusaders when Rowell added another interception to make it three on the night for the stingy Bronco defense.

With the ball in the offense’s hands, the Broncos ran out the clock to secure a 28-6 victory. After the game, Holly Pond coach Mike Bates said, “If we didn’t see anything we needed to work on we wouldn’t practice Monday, but we are going to practice.” He also gave all the success on the ground game to the offensive line as well as the new offensive line coach and offensive coordinator.

Holly Pond will take on Brindlee Mountain at home on Sept. 1.