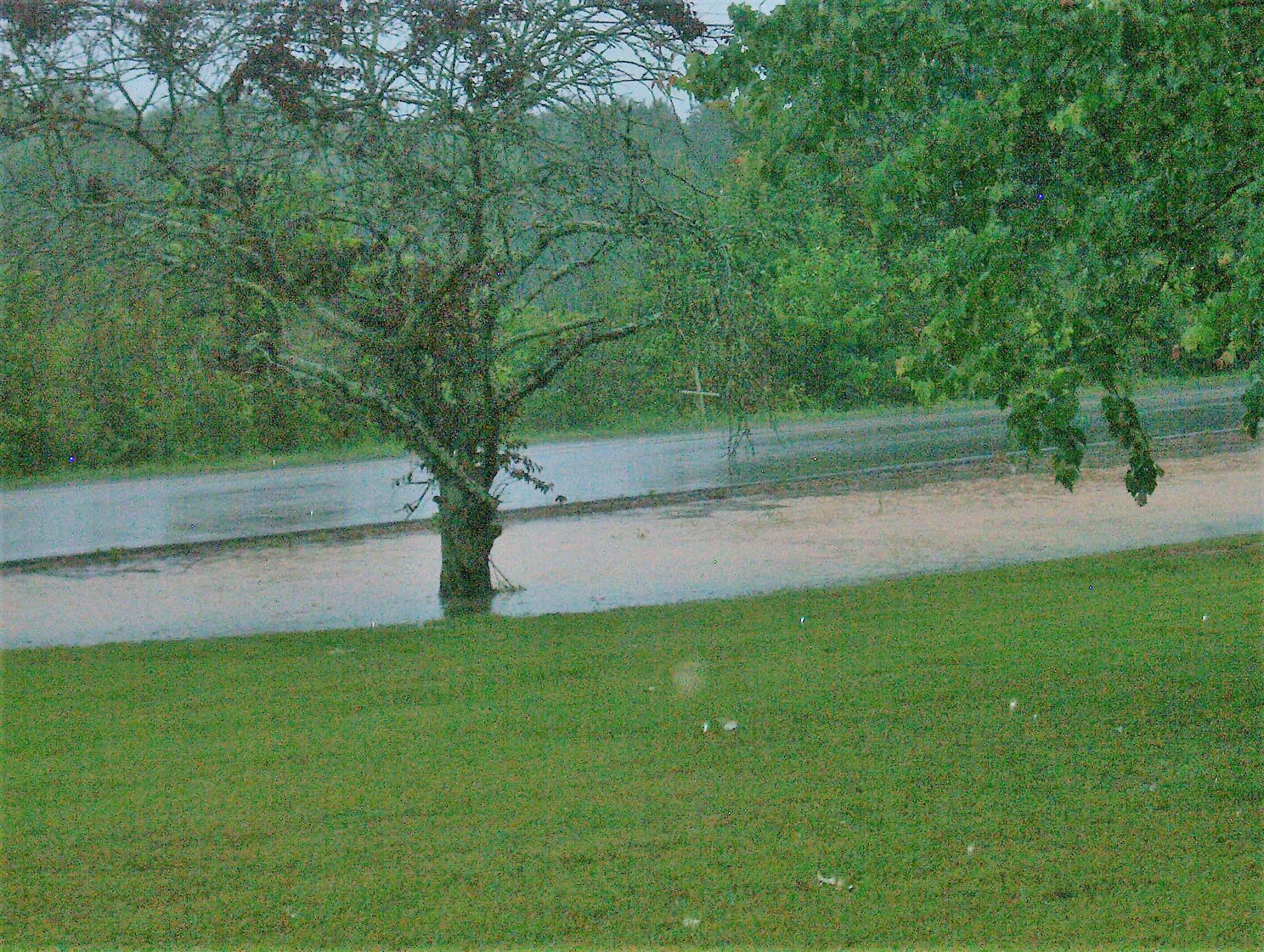 Said England, during heavy rain, the ditch floods quickly, encroaching into her yard and threatening to wash over the road. / courtesy Alice England

DODGE CITY – When it rains at Alice England’s house, it doesn’t pour, but it does flood a little, and the water seems to enjoy hanging around.  Water fills the low ditch in front of her home just inside the Dodge City town limits on County Road 216, and often encroaches into her yard, she says.  To make matters worse, England contends, the water does not run off down the ditch; it stands for days until drying up, becoming a breeding site for mosquitoes during warm months.

“It doesn’t have anywhere to go,” said England, “so it fills up quickly.  And the water doesn’t travel; it just sits there until it’s absorbed.  It stands for several days, and in the deep parts it becomes a pond.  It can stay here for a week or even two weeks.”

The Tribune met England at her home on Monday to view the situation.  At the time of the visit, Dodge City had been hot and rain-free for 18 days, according to Weather Channel records; but the bottom of the ditch was still clearly wet in places.  Additionally, England pointed out the right of way along the road, that was overgrown with brush in several places.

England says she has been trying since 2014 to get something done about the problem.  She alleges that after repeated attempts to get help from the Cullman County Road Department, she was informed in 2016 that since her address is within the town limits of Dodge City, she would have to contact that municipality.  In a written statement, she related what happened after that:

“I next called (the) Town of Dodge City and spoke to the mayor.  She was very understanding and did want to help me in some way.  She asked what I thought could be done.  I really had no idea, but did suggest some rip rap to possibly stop the erosion of my yard into the ditch.  Even that help didn’t happen quickly (only after a month or two of more calls), but they did finally.”

Though Dodge City Mayor Tawana Canada did try to assist England, the measure was only intended to stop erosion, and could not alleviate the flooding or speed up drainage.

England’s written statement continued, “Now I have rip rap with standing water around it . . . The ditch is now barely a depression as you can see from the photos (which England submitted to The Tribune), not even what you’d call a ditch at this time and it is eroding still.  We are at the bottom of a hill, so I believe that some kind of engineering or drainage reworking will be required to correct this serious problem — and it goes on a pretty good bit like that, as my driveway is not the only one holding water.  BUT, we can get no one to help us, so here we are, at our wits end and very discouraged.”

The Tribune visited Dodge City Town Hall to speak to Canada about the matter.  After reviewing England’s written statement and photographs, she stated that she has not spoken directly with England since last year and would prefer to withhold comment on the matter until she has had the opportunity to do so.