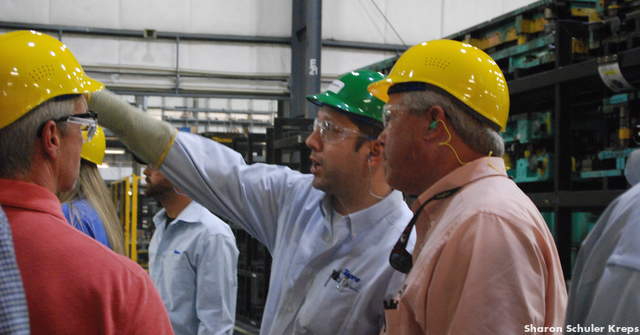 CULLMAN – Topre America, a manufacturer of press-formed metal components for automobiles from brands Toyota, Hond, and Nissan, recently moved part of its production to a new center in Ohio.  The company said that no Cullman jobs would be lost, and has since announced plans to expand both activities and facilities at the Cullman plant.  A new production line will press metal parts under heat, a process Topre says will allow lighter parts to be made while actually increasing the strength of the metal, leading to vehicles that are both safer and more fuel efficient.

“They’re also going to be building a new facility out at the site, just east between them and Nafco (North Alabama Fabricating Company).  They’re going to build a new distribution facility and a facility for storage of tool and die maintenance equipment for the new hot press line.  It will be a three-year project before everything’s fully online.  The County (Commission) has agreed to the abatements needed, and we’re moving forward from there.”

In May the Cullman County Commission agreed to a $1 million property tax abatement over the next 10 years, to help Topre offset some of the cost of the expansion.

Greer talked about the facilities that Topre has in other states, then explained how the tax abatement that brought the new facility here benefits the Cullman community, “When you go to the County and you ask for an abatement, I think there’s a misconception where people think you’re giving corporate welfare; but they have operations in Mississippi, an operation in Tennessee, an operation in Ohio; so they can put them anywhere they want.

“What you’re actually abating is a portion of the tax that doesn’t exist if they don’t come and do their expansion here, and put that equipment, and that building and those things in Cullman.  The property tax abatement was a million dollars over 10 years, but what they (Topre) did was immediately begin paying a portion of $750,000 in education tax.  That doesn’t count the jobs you get, and the sales tax off of the jobs from the money they spend on things they buy within the community.  As soon as he puts that facility there, some pest control company is coming and spraying it, and some landscaping company is doing the lawn mowing.  All of those things are further expenditures locally.  It spreads out an awful lot in the community.”

The expansion project is projected to begin later this summer.