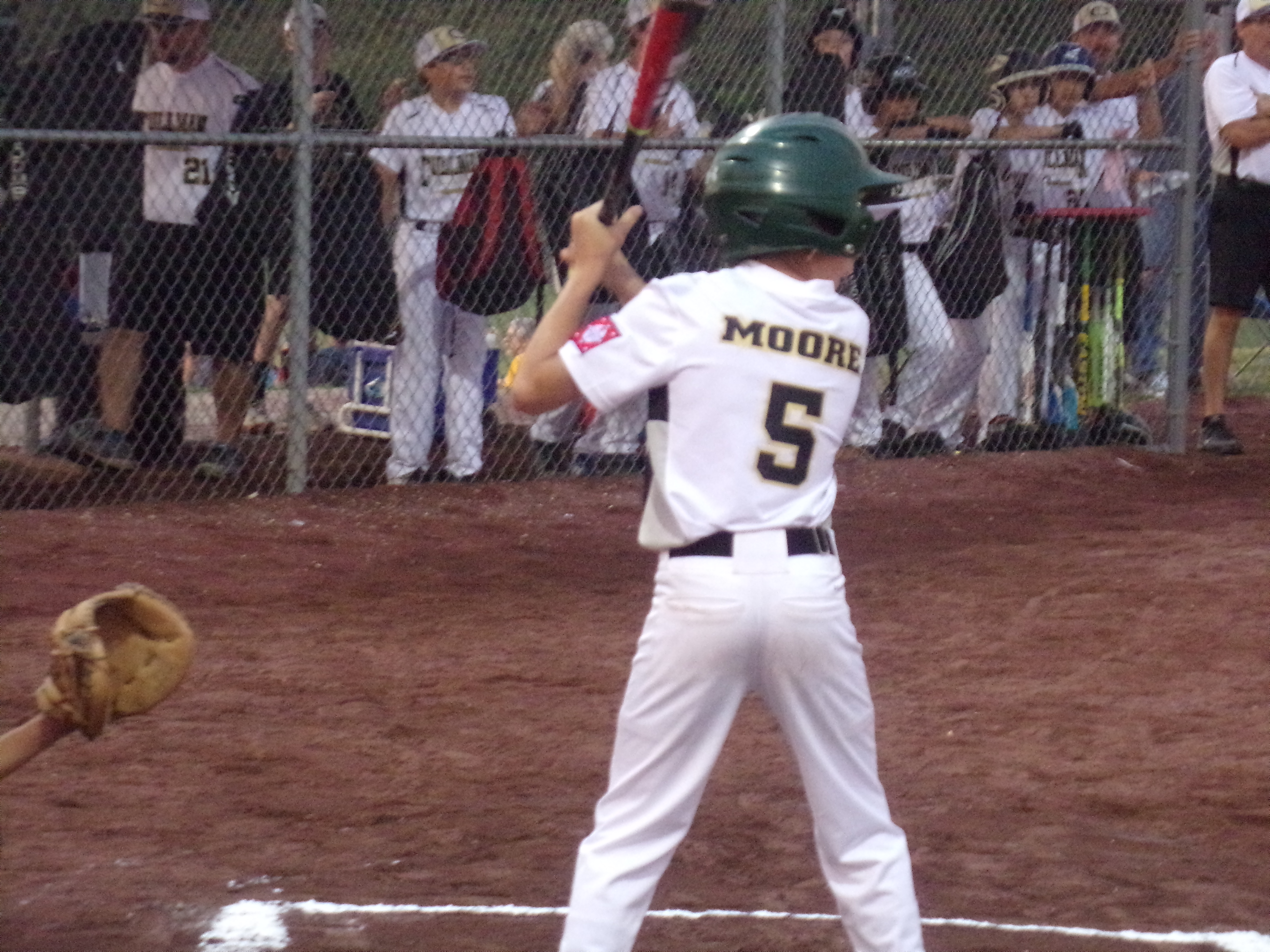 No. 5 Hunter Moore bats in the top of the first for the Cullman All Stars. / Johnny Thornton

VINEMONT – Cullman's 12-under All Stars put together a comeback in the final two innings to overtake Winston County's All Stars 7-4 and win the Dizzy Dean 12-under District V title Monday night at the Vinemont Sports Complex.

Cullman managed just one run on three hits through the first four innings, thanks to good pitching by Winston County left-hander Eli Kennedy.

But in the fifth, Cullman capitalized on two balks by Kennedy, plus timely hits, to move back on top. They added three to their side of the scoreboard in the sixth and were able to shut down Winston County's serious threat in the final inning.

Cullman led 1-0 when Hunter Moore singled in the first, stole second and third and came home on a balk call against Kennedy while facing clean-up hitter Lane Parker.

Winston County answered with a run in the second on a single by Eli Edgil, who later scored when Kennedy grounded to Parker at the mound. Parker threw to first for the out, with the score locked at 1-1.

A two-run third by Winston County sent them into the lead. With one out, Sy Blanton walked and was awarded second on a balk by Parker. Following a strikeout of Briley Millican, Edgil blooped a single to center that scored Blanton and it was a 2-1 advantage for Winston County.

Edgil moved into scoring position and advanced home on a passed ball, giving them a 3-1 lead at the end of the third.

Then in the Cullman fifth, Zayden Calvert grounded into a fielder's choice, forcing Logan Brothers out at second. Calvert took second on a balk by Kennedy, stole third base and came in when the throw to third sailed into left field to narrow the margin to 3-2.

Moore was safe on a fielding error, then another balk by Kennedy trying to stop Moore from another stolen base tied the game at 3-3. The inning was extended when Ty Federer's pop fly was dropped at second, allowing Parker to step to the plate.

Parker took the first pitch and ripped the ball up the middle, scoring Federer, and Cullman was in front at 4-3. The local team manufactured three runs in the fifth on one hit, three errors and two balks.

Parker was able to keep Winston County scoreless in the fourth and fifth, retiring six of seven batters he faced in the span.

Cullman added to its lead in the sixth on a run-scoring single by Brothers, an RB I single by Calvert and a passed ball that scored Drew Carter.

Winston County produced a run in its final at bat on a ground out to first by Brody Tidwell that scored Kennedy. Kennedy singled with one out in the inning, went to second on a passed ball and third on a stolen base.

But Parker regrouped and finished the 1 hour, 36-minute contest by getting Eli Green who tried to bunt his way on for a hit. Parker ran in front of the plate and threw a strike to Carter to end the game.

Cullman was 4-0 in the tournament that started on Friday. Winston County defeated Vinemont in the semifinals by the score of 8-2, giving them a chance to play for the district title.