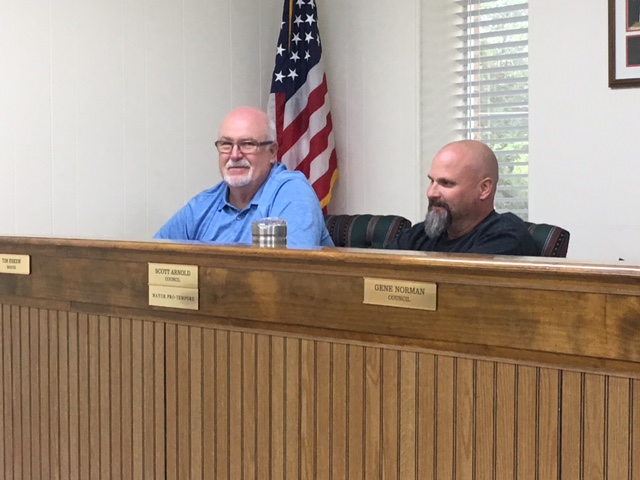 GARDEN CITY – At Monday evening’s meeting, the Garden City Town Council was still visibly shaken by the recent and sudden death of Councilman Gene Norman. Norman passed away Monday, June 12 of a reported heart attack. His burial took place on the day of his 47th birthday. Before the meeting, several observations were made.  Councilman and Mayor Pro Tempore Scott Arnold cited Hanceville Funeral Home as reporting that Norman drew the largest number of attendants ever for a visitation and funeral.

Arnold also talked about moving forward without his friend and fellow councilman, “It ain’t going to be normal; we’re going to have to get used to a new normal.  Gene wasn’t perfect, ain’t none of us perfect.  But I’ll tell you what: if you wanted an example of a Christian man, he was a Christian man.  He strived every day to do what’s right.

“He’s sorely missed.  At church, before service every Sunday, we always gather all our men together in the back room and we pray.  Gene was always the one that volunteered to pray.  Yesterday, our circle was smaller.”

The council announced a resolution in Norman’s honor:Norman passed away Monday, June 12, 2017 of a reported heart attack. His burial took place on the day of his 47th birthday.

WHEREAS, it is a great sadness to the town of Garden City, Alabama to lose one of its important and distinguished citizens; and

WHEREAS, Gene Norman was a faithful Councilmember of Garden City’s Town Council from 2012 to 2017; and

WHEREAS, Gene Norman was a faithful member of Garden City’s Planning Commission from 2002 to 2017; and

WHEREAS, Gene Norman served selflessly as a volunteer firefighter for Garden City’s Volunteer Fire Department for several years; and

WHEREAS, Gene Norman was greatly loved and respected among those who knew him, both personally and professionally; and

WHEREAS, the Town of Garden City extends its most sincere condolences to Gene’s family and friends; and

NOW, THEREFORE, the Town of Garden City fondly remembers our friend and fellow Councilmember who will be tremendously missed.

The resolution was tabled for the next meeting, as one council member was absent, and it was desired that all members should be able to sign the statement together.

Action to fill Norman’s seats on the council and planning commission was tabled to be taken up at a later meeting.

In other business, the council approved a resolution reporting to the Alabama Department of Environmental Management that the Town has reviewed the annual Municipal Water Pollution Prevention report and found no issues in the town’s water system that needed to be addressed.

The council also accepted a bid from John’s Paving to seal coat at the town hall and park, and approved the placement of “children playing” signs on Boundary Avenue.