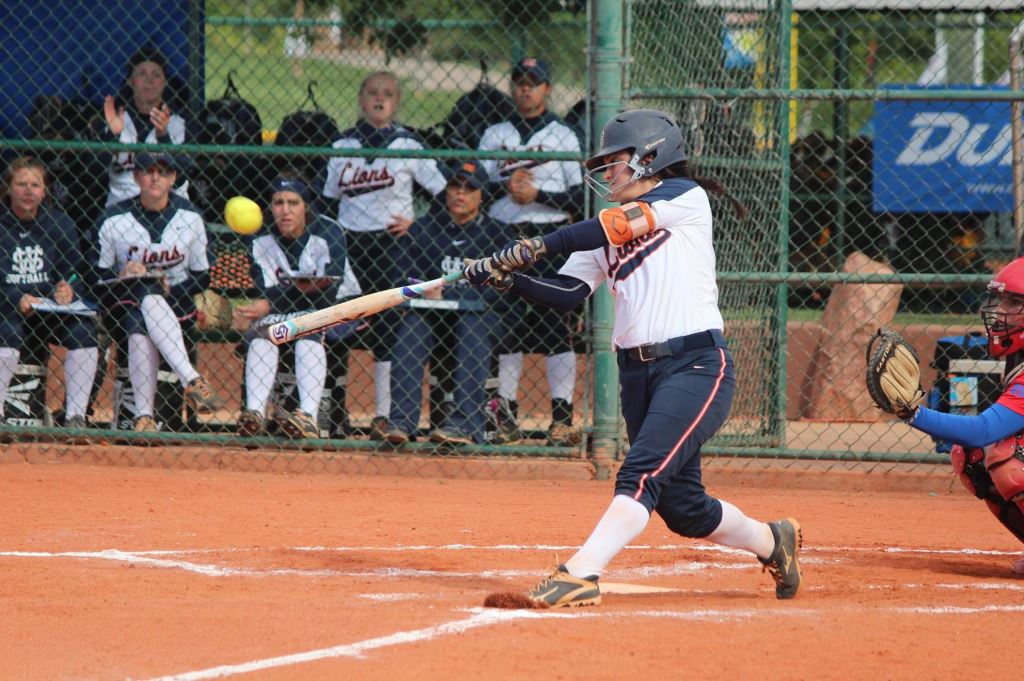 Wallace State sophomore Taylor Beshears connects on one of her two home runs against North Central Texas at the NJCAA Division I National Championship in St. George, Utah.

North Central Texas scored three runs in the bottom of the fourth inning to take a 7-6 edge and held on for the win at the Canyons Complex in St. George, Utah.

Wallace State, a No. 12 seed, dropped its opener to No. 5 seed Central Arizona, 9-6, on Wednesday night despite having a late lead. The Lions also led 4-0 against North Central Texas.

Sophomore Taylor Beshears was hot in Utah, finishing the two games with six hits, including four home runs. She cranked a pair of solo shots against Central Arizona in Wallace State’s tournament opener and finished 4-for-4 against North Central Texas with two more homers and four RBIs.

Beshears, who has signed with Jacksonville State, capped a stellar career with Wallace State. After setting multiple single-season records as a freshman and earning 3rd-team NJCAA All-American status, Beshears was named the ACCC Tournament MVP earlier this month. She finished the season hitting over .440 with a team-high 17 home runs and 45 RBIs and closed her Wallace State career with 30 homers and 129 RBIs.

Amber Hammonds blasted a three-run homer against Central Arizona. The sophomore center fielder finished the season with 15 home runs. She is committed to play next season at UAH.

Tanner Robertson had a pair of singles against Central Arizona and Jodie Farnetti, Taylor Stalnaker and Charlee West each had a single. Brittany Ledbetter added an RBI.

Sophomore Lyndsay Reeves had a double and two RBIs against North Central Texas, while Ledbetter, Hammonds and Robertson each added a single.

Beshears and Hammonds were ACCC 1st-team All-Region selections this season, while Ledbetter, West and Karra Elam were named to the second team.

Wallace State’s women’s golf team finished 12th in the nation at the NJCAA Division I Women’s National Championship, which wrapped up Thursday at the Chateau Elan Resort in Duluth, Georgia.

Freshman Annalee Stephens had the best finish for Wallace State, placing in a tie for 36th overall.

Wallace State made history in April by winning the inaugural ACCC/Region 22 women’s tournament. Stephens was the low medalist, and McCormick and Ruehl also made the All-Tournament team.