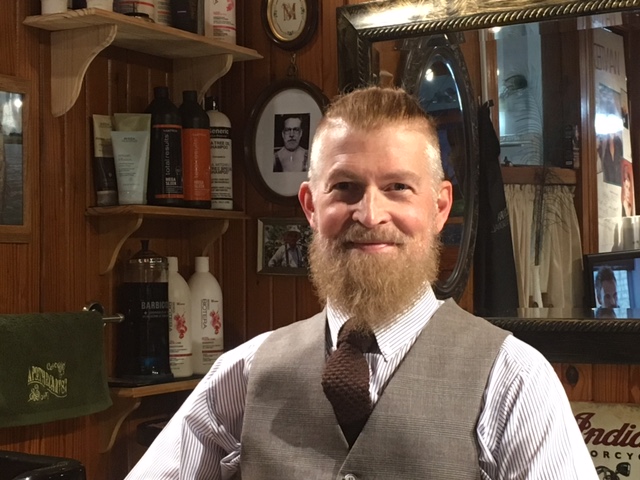 The Warehouse Barber in his natural habitat

CULLMAN – In the heart of the Warehouse District sits Bella Faire Day Spa and Salon, in the old Cullman Banana Supply warehouse at 104 First Ave. SE.  Inside, the wide open space has been sectioned off into an intriguing maze of work spaces offering hair and makeup services, massage, sauna, beauty supplies, and even a retail shop with clothing and jewelry.

It doesn’t take much exploring inside to come across an unusual shop within the shop, with an unusual occupant.  The small central room with unpainted wood walls, that originally served as the money room for the banana warehouse, is now the shop of John Wesley, the Warehouse Barber.

Wesley has been cutting hair since he was a teenager.  After impressing a fellow fan at a Prince concert in Kentucky with his then pink mohawk, he got an invitation to try his hand at cutting.  The shop owner took him on as an apprentice, and eventually sent him to study in New York.  From there, he studied and worked in Atlanta; he ultimately found his way to Cullman.

Most people around here aren’t familiar with that story.  Cullman folks probably know Wesley better as the manager of Hurricane Creek Park for Cullman Parks and Recreation.  After years with CP&R, he decided to make a change, and he talked to The Tribune about how he reached that point.

“I don’t cut one head of hair without explaining that long story!  It actually started way back in ‘89, when I first moved to Cullman.  I was cutting hair in Atlanta; that’s when I met my wife (Nicky McCrary).  She was living in Atlanta, too, but she’s from Cullman.  One thing led to another, and we got married.  Crime was getting really bad at that time in Atlanta, and I was very eager to move to Cullman.  We’d been going back and forth from Cullman to Atlanta for a while, and I really liked Cullman.”

Once here, Wesley discovered that hair was not as lucrative a business in Cullman as in Atlanta, so he began exploring other possibilities.

“Once we moved here,” said Wesley, “I agreed to help her father with his business, Thomas Drapery.  I went to school to learn upholstery, interior refinishing and antique restoration.  She did merchandising and interior design to help with their business.”

Along the way, Wesley, who had long been active in outdoor recreation, began using his newfound upholstery skills and equipment to sew rock climbing and caving gear.  When the drapery business was sold, he started an outdoor adventure business and took charge of the bike shop at Werner’s Trading Company.  While there, he was approached by CP&R about working part-time with their outdoor recreation program.  He found himself bouncing between three jobs and workplaces when the next chapter began.

Wesley continued, “While I was juggling all that, Buddy Rogers got to a point that Hurricane Creek Park was too much for him.  He needed to do something with his beloved park; and Mr. John Hunt, the CP&R Director, stepped in and was able to acquire the park.  Since I was already doing all that with CP&R, he approached me about managing the park.  For the next 13 years, I was there.”

Wesley enjoyed the work, but a lifestyle of such activities is bound to take its toll.  The cost to his body lead him from the rock face back to the shop.

“Eventually,” he related, “I knew at some point I would come back to hair.  I loved the job at Hurricane Creek, but it was very hard work.  I had surgery on both my feet, my knee’s gone, and I really knew I needed to change careers when I injured my back.  That was it; I began the process of getting established back into the hair business.”

Over the last two years, Wesley resigned his position at CP&R, rehabbed his back, renewed his licenses, and got back in the swing of salon things with Jimmy Drake at the J Drake Salon.  About six months ago, he came to Bella Faire.

“Gaining a clientele has been the most difficult part,” he related.  “It’s a long, hard road to gain the trust of people to cut their hair.  I knew it would be that way.  But I enjoy what I do, I love cutting hair and making people happy.  After you cut someone’s hair, and they’re really happy with what you’ve done, that makes me happy.”

Wesley markets himself as a barber, the “Warehouse Barber” to be specific; but he’s actually a fully qualified stylist for both men and women.  Most of his clients are men at this point, but ladies are finding their way through his door.  He’s fully trained and experienced in the Vidal Sassoon method, having studied and worked as a hands-on apprentice in Sassoon salons in New York and Atlanta.  He has extensive experience in hair color and all those fun things, though his passion lies with the simple pleasures of scissors, combs and clippers which he considers better for long-term hair health.

His tiny 8-by-15-feet shop has much of the feel of a traditional neighborhood barber shop, with unpainted wood paneled walls and a checkerboard tile floor.  With its own door, it is truly a shop within the shop.  With its single chair and shampoo sink, customers know they’re getting personal attention.

Wesley said that customers enjoy the experience of his work space. “All the clients love this room.  There’s just something about the aesthetics of the wood inside; it’s cozy, it’s soothing, it’s nice.  This little room just feels different, and I enjoy it here.”

Wesley has both a knack and a drive to do what he does.  He blocks out a full hour in his schedule book for a haircut, so he can talk with customers about what they want and take time to get things right.

He concluded, “If you’re looking for someone who really pays attention to the client, I do not just shoot you through.  It’s about you and your experience when you sit in my chair, and I cut your hair.”

For more information about Bella Faire Day Spa and Salon, or to schedule an appointment with John Wesley or another member of the staff, visit www.bellafaire.com.