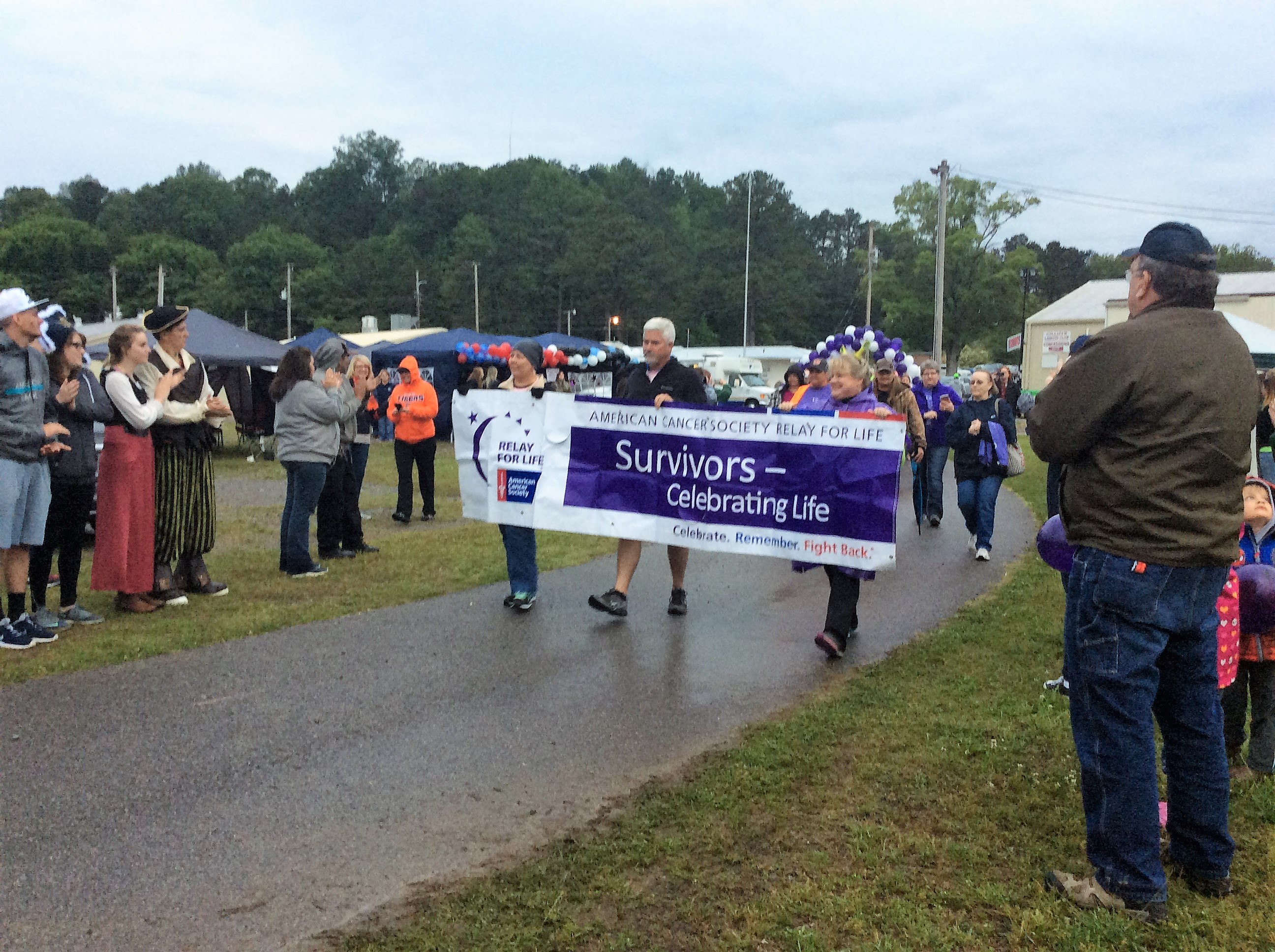 CULLMAN – With colder temperatures and light to moderate rain, Friday was a less than ideal day for outdoor events. The show went on, however, at the Cullman County Fairgrounds where the American Cancer Society's annual Relay For Life event went on well into the evening. The event started off on a good note with a $17,200 donation from the Boozefighters Motorcycle Club. Two members then mounted their bikes and made the first lap around the track before riding off.

The opening ceremony continued with a testimony from cancer survivor Sabrena Hadley, a salon owner from Winfield. She talked about her struggles after her diagnosis, especially her loneliness. She shared that while she was surrounded by caring friends and family, she felt that none of them truly understood what she was going through. She ended up meeting many women with similar diagnoses through a program called Look Good Feel Better, which helps women with cancer regain some of their lost self-confidence through spa days and free cosmetics.

After her testimony, emcee Tim Kelly asked all survivors to line up on stage and share a bit about themselves. After saying their part, each survivor received a balloon, which was released just before the survivor walk. After the survivors made their lap, anyone who had ever been a caregiver was asked to participate in the caregiver walk. Attendees were given a few minutes to find their groups, then each team walked a lap and went to the pavilion for the team banner judging. After the judges got a good look at all the banners, they went to judge the team tents while the Wallace State Singers performed their tribute to Elvis compilation.

Around 9 p.m., the luminaria service began in one of the exhibit halls. The luminarias were paper bags with electric candles inside them and the names of people who were being honored or remembered for their fight with cancer written on the outside. The guest speaker for the service was Lori Kuhuski, who shared her experiences with both her own and her loved ones' cancer. She shared her memories of what handling cancer was like in the days before Relay For Life, of the emotional goodbye with her sister as she left this world, and how she discovered that the words "you have cancer" were much worse for her when they were directed at her husband than when they were directed at her. As the lights in the building were turned off to show the illuminated bags, she let her sister's memory shine with the rest. The service included music from the group Soul Provider, who sang a capella versions of "Amazing Grace" and "How Great Thou Art."

From sundown to nearly midnight, teams competed in various contests to see who could come up with the best designs. The T-shirt contest involved team members showing off their shirts and explaining the significance behind their choices, and the spirit stick contest worked in the same way. The undergarment competitions involved much more laughter than explanations, as the men modeled their teams’ bras and the women modeled their teams’ boxer shorts. The womanless beauty pageant was entertaining before it even started, as several organizations used the men's need for time to get dressed to draw for their raffle prizes. It only got funnier after all the contestants were off the stage because two competitors got into a playful "fight" over which one of them got to seduce the judges, which had to be broken up by the contestant from the Cullman County Sheriff's Office, who then decided to seduce the judges himself. The last contest before awards were handed out was a lip-sync battle.

The first awards handed out were for overall spirit. The Kris Kornerstone team took first place while the Sheriff’s Office got second. Next was for the banners: Eva School and Kris Kornerstone tied for third, Cullman High School placed second with their larger-than-life Shrek and Fiona, and The Bridge took first with their pirate-themed banner. For the shirts, The Bridge came in third, Team McGee in second and Topre won first with their slogan "Fight like a Jedi." The Bridge won first place in the spirit stick competition, while Eva School got second and the Sheriff's Office got third.

The first of the funnier contests to be awarded was the bra competition, and the number of light-up accessories on the bras gave a whole new meaning to the phrase "flashing someone." ACYT, or Yutaka, took third place, Cullman High School got second with their Shrek and Donkey cups, and Eva won first with their fairy princess brazier. The Sheriff's Office got third place for their boxer shorts, Cullman High School got second with a pair that told everyone to "flaunt their assets," and Eva again took first place with their heavily-bedazzled underwear. For the womanless pageant, the contestant from The Bridge won third place, the Sheriff's Office contestant won second and the first-place award went to the competitor from Wallace State Community College.

The last awards handed out were for tent decorations, which were all very close scores. Cullman High School got third place with their ogre swamp, while The Bridge got second for their pirate ship design. First place went to the C Team, who had intricately decorated their tent to resemble a piece of Middle Earth from Lord of the Rings.

What is Relay For Life?

The American Cancer Society explains: “Relay For Life is a team fundraising cancer walk event where team members take turns walking around a track or designated path. Each event is 6-24 hours in length and each team is asked to have a member on the track at all times to signify that cancer never sleeps. Cancer patients don't stop because they're tired, and for one night, neither do we.

“Each team sets up a themed campsite at the event and continues their fundraising efforts by collecting donations for food, goods, games, and activities. This money will count towards their overall team fundraising goal.”