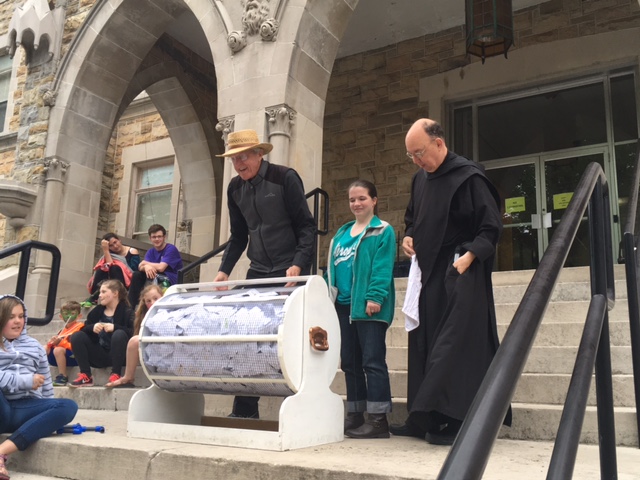 Five prizes, including a 2017 Jeep Patriot, were raffled off

CULLMAN – Despite threatening weather and competition from other events, St. Bernard Prep School’s primary annual fundraiser came off successfully. More than 300 volunteers and 140 juried craft exhibitors welcomed thousands of visitors to the grounds of St. Bernard Abbey for the 33rd annual Bloomin’ Festival.

Ave Maria Grotto Director Bill Ellis noted that attendance seemed slightly down from last year, but numbers were still quite strong.  Most visitors came just for the arts and crafts, but the Grotto still saw approximately 1,150 visitors.

“We were blessed that the rain came when it did,” he observed.  “I know from talking to friends from Birmingham that there were other events going on this weekend that could have hurt our attendance, and probably just the threat of the weather made things not quite as good as they were last year, but I think we did about as well as expected.”

Festival Director Joyce Nix was pleased with what she saw over the two days.

She shared, “It’s been great!  We got off to a rocky start yesterday; we thought we were going to get the rain and the storms.  Thankfully, that went north and south of us.  We can say we’ve been blessed; God was certainly watching over us today.  We’ve been very pleased with the crowds, in spite of the weather.  They’re commenting on the quality and how good the prices are, and the nice variety.  It’s been a great weekend!

“I don’t have any numbers yet, but I think everybody who came ate three times, and made many trips around the building.  The popcorn man never let up.  The nut man, he stayed busy.  The kids made lemonade all weekend, and I don’t think the food tent ever let up.”

At the end of the day Sunday, the school raffled off five prizes:

Nix concluded, “We always brag on our students and our faculty, and staff and parents.  They’ve all been wonderful to come in and give of their entire weekend.  Everybody just worked hard to pull together for the same purpose, and that’s their school.”

Find a full photo gallery on our Facebook page at www.facebook.com/CullmanTribune.