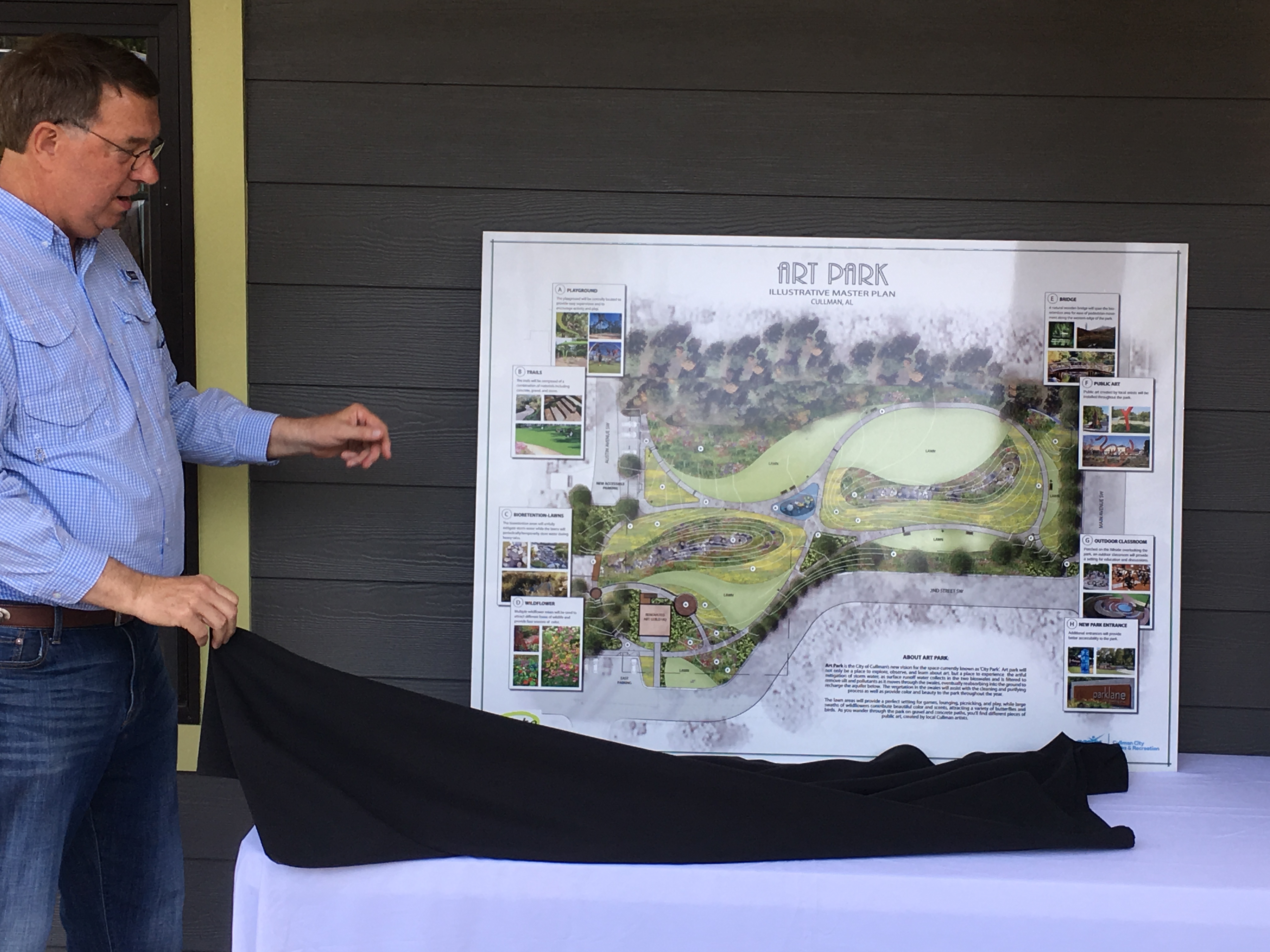 CULLMAN – It could not have been a bigger day in the tiny southwest corner of the city of Cullman.  After a run at Heritage Park, Cullman City Parks and Recreation (CP&R) hosted Art in the Park at City Park (also known as Main Avenue Park) Saturday.  At a special ceremony in the morning, Cullman Mayor Woody Jacobs and CP&R cut the ribbon on the Cullman Art Guild’s new headquarters and gallery at the park, as they unveiled plans for a substantial renovation of the park.  They even renamed the site; from now on City Park will be “Art Park.”

Art in the Park

More than 20 arts and craft vendors set up shop around the park, while kids played on the playground and took park in a sidewalk art contest.  In the converted house that was once CP&R’s headquarters, the Art Guild showcased the work of its instructors and students.

CP&R’s Waid Harbison was the event coordinator, and he shared a little about the day’s activities.

“We have done this for the last two years at Heritage Park.  We had a community yard sale over there, but we kind of wanted to separate it and let it have its own event, to take on a little more of an artsy feel.  It fit perfectly with our new building over here, that we opened up in September; we thought it would be a great place to have this art show.

“We’ve got a lot of really good craft vendors.  We’ve got 25 guys that signed up, with really good crafts.  We’ve added live music this year, that we didn’t have at Heritage Park; and we’re doing a lot more kids’ crafts that we didn’t have before.  We’ve done the sidewalk art contest before, and we give the winner a pass to the Aquatic Center for the summertime; so a lot of kids are excited about that.

“The whole thing is just to promote arts in the community, and we really thought this park in particular was really a homey, artsy kind of setting.  It’s a nice, laid-back kind of park, so it fits in well with what we want to do.  Now it will be called ‘Art Park’ from today on.”

At the southwest corner of what is now Art Park sits a converted house that once served as the office of CP&R.  A few years ago, the Cullman Art Guild moved in; last year they began renovation.  During Art in the Park, CP&R and the City of Cullman officially cut the ribbon on its new gallery.

“Today we’re having the opening of our new Art Guild building.  This building is one of the oldest buildings, if not the oldest building in CP&R.  It’s been through several different things.  It’s been the art building for several years, but we did some renovations this last year.  This is a good way to kick it off.  We ordered up some beautiful weather today, and we’ve got a good crowd out here.  We’re happy to be part of making Cullman a better place to live.”

CP&R and the City unveiled the plan for a major renovation of the park, with landscaping that will beautify the site and help water drainage in the area.  CP&R Director Nathan Anderson spoke about the design.

“We’re really excited about this.  This will focus on conservation efforts, so we can alleviate some city flooding issues down, so this park will retain more water.  We will also have four seasons of wildflower blooms in this garden, so as you drive by on West Main, this park will have four different looks out of the year.  It’ll lower our maintenance for our staff, and it’ll be a beautiful addition to our community.”

Renta Landscape Architecture drew up the new park design.  Company President Tony Renta was on hand, and shared, “It started off originally just to do a renovation of the park, to go along with the renovation of the building; then we started running with the idea of rebranding the park from City Park to Art Park, to really celebrate public art.

“Some of the other projects we’re working on with the City have to do with infrastructure improvements throughout: how we can control floodwaters and cut back on city maintenance.  The new park design is actually designed to capture the stormwater that comes through here now.  We’re going to take out the existing concrete channel, and actually let the park flood on purpose during flood events.  It’ll store the water, filter the water, and when it comes back out of the park, there will be less water leaving the park and it’ll be cleaner water than it is now.

“From an environmental standpoint, we’re making improvements, but from the maintenance standpoint we’re also saving money.  We’re introducing large swathes of wildflowers, native plants under the trees, and very defined smaller areas of turf grass for play.  So maintenance will go way down, and the savings can go into other installments in the park like the new playground.  We’re going to save a lot of money for the City; and if we’re going to do that, let’s make it pretty at the same time.”

Renta hopes to see renovation beginning later this year, with the improved park completed early in 2018.