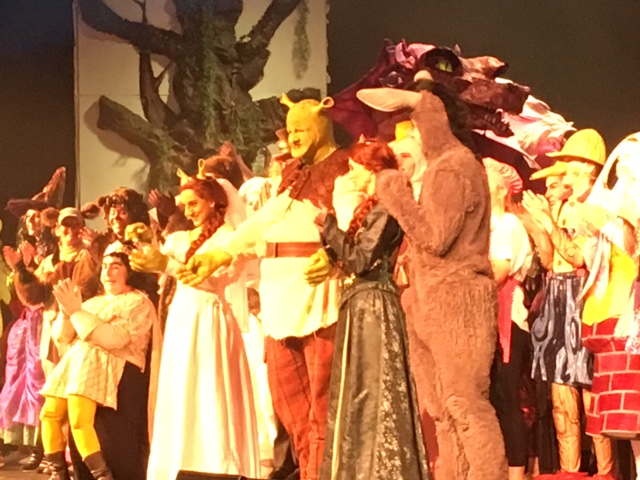 CULLMAN – On Friday evening, Cullman High School’s (CHS) Performing Arts gave a public performance of “Shrek: The Musical” at the CHS auditorium.  The show wasn’t simply a rehash of the movie with singing; plot twists here and there easily kept veteran Shrek fans engaged, and the music was fun and at points moving.

The show was entertaining: actors played their roles in convincing ways that Shrek fans would appreciate, and there were just so many great voices bringing the music.  Stage crews moved swiftly; there was no thumb-twiddling among audience members between scenes.

It was a high school show, though, and they had minor issues common to programs without a Broadway budget: especially mics that crackled and occasionally fed back, but the tech crew stayed on top of things well.  At one point, a mic simply didn’t transmit for an unknown reason, but the unfazed actor simply stepped up her vocal projection so that she could be heard clearly by this reporter from the back of the auditorium until she exited the stage later in that scene.  Even the minor problems they had showed how well prepared the CHS drama team was.

The Tribune caught up with CHS Drama Director Wayne Cook and CHS Music Director Sarah Skinner, to ask how the final preparations and launch of the show went.

Cook shared, “It’s been good.  We’ve done a lot of children’s shows, had a lot of positive feedback from everybody.  We’re thankful that people have appreciated what the kids have done.  The support has been overwhelming, and we’re just glad.

“It’s been a great experience.  You always wonder if it’s going to come together, but it always does.”

“I’ve said it a million times,” said Skinner, “but I’m really proud of the progress.  I’ve gotten a great response from everybody who’s seen it.  They’re such talented kids; I’m not surprised they’re being impressive.  They’re doing a great job.”

We also got to catch up with a couple of cast members (Sorry we couldn’t talk to all of them.): Drew Fillinger, who played Donkey, and Shrek himself, Rutland Turner.

Fillinger talked about the challenge of playing the manic but “noble steed” Donkey: “I always have to be on my A-game, and I always have to be in a happy and excited mood when I get on stage.  Sometimes, if I’m not feeling up to it, I don’t want to get on and be all go-lucky and joyful.  That can be a little bit frustrating.  Other than that, it’s been a wonderful time.  I’ve thoroughly enjoyed being a part, and it has stretched me as an actor.

“I’ve been super blessed to be part of this department for these last four years.  Theater has been one of my biggest passions, so it’s been a wonderful place to grow with my talents and able to blossom through this department.  I’m grateful for all the abilities the Lord has given to me, and all the opportunities that I’ve been able to have.”

Turner spoke through the mouth hole in his giant rubber head, and one of his biggest challenges was plain to see.  When asked about challenges, he replied:

“Definitely the prosthetic face!  It’s been really hard to work with, but I think we’ve done a pretty good job- the makeup crew’s handling it.”

The mask also provided Turner with one of the joys of his job: “being loose with everything, and not caring about what I looked like, because you can’t see me.

“This is my first major role,” said Turner.  “I was in ‘Beauty and the Beast’ last year, but I was in the ensemble cast; so, this has been a big step for me.”

Turner is a junior, so CHS will have his services for another year.  Fillinger is a senior, headed to Samford University this fall to study musical theater.

Turnout for the first two performances was good, and the show benefited from committed sponsorships.  Cook was pleased with attendance at the shows and support for the program.

“We’re thankful for the support,” said Cook, “and just ask for the community to keep supporting the arts.  We think it’s an important part of our town.”

Two additional performances were slated for Saturday: 2 p.m. and 7 p.m.

See a full photo gallery on our Facebook page.