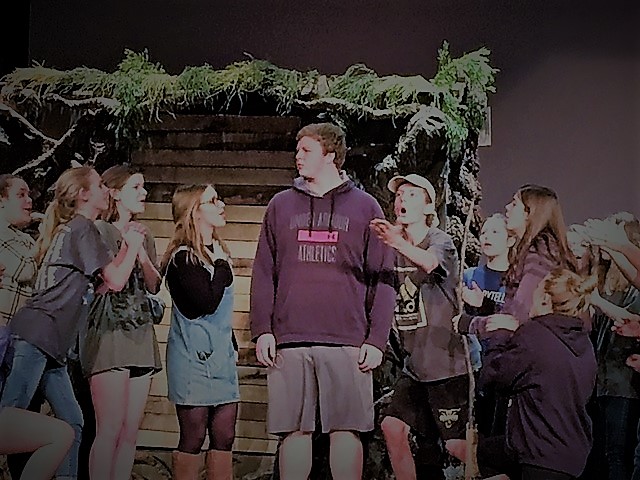 A recent rehearsal for "Shrek: The Musical"

CULLMAN – After last year’s “Beauty and the Beast,” Cullman High School Theatre (CHST) chose to stick with the animation adaptation idea, but has taken a decidedly different twist on the fairy tale genre with “Shrek: The Musical.”  The production will run Mar. 23-25 in the Cullman High School auditorium.

While the production does appeal to youngsters with entertaining silliness, it also (like the original motion picture) has its share of humor geared toward adults.  Even that, though, stays pretty kid-friendly.  Hilarious and witty at the same time, “Shrek: The Musical” may actually have something for everyone.

Shrek fans will get to relive some of their favorite film moments, but this is not simply the movie rehashed.  Shrek still likes his privacy while secretly longing to be loved, Donkey is still a manic explosion just waiting to happen, Farquaad is still trying to compensate and Fiona is still obsessed with getting her happily-ever-after.  There are minor modifications to the story, though; and of course, a lot of singing.  If you’re a fan, this is your opportunity to see the same Shrek without seeing the same old Shrek.

This production is a big-budget project for a high school.  The CHST program is funded by money from a $20,000 arts grant from the Alabama State Board of Education, as well as numerous sponsors.

The principal cast includes students who are already making names for themselves.  Rutland Turner, who plays Shrek, won an award at last fall’s State Thrumbauer Theatre Festival for solo dramatic classical acting.  Drew Fillinger, who could put on a one-man show as Donkey, won awards for musical theatre and solo dramatic acting, as well as being named to the All-State All Star Cast and All-State Choir.  Justin Weygand, who plays Lord Farquaad, was awarded for duet musical theatre.  Sarah Helms and Marie Bean fill out the principal cast as the two lead Fionas (Fans know why.  The production, in fact, includes four different Fionas portrayed by six different actors; to find out why, you’ll just have to come to the show!).

Skinner complimented her students, “The kids are so talented.  They actually have risen above what I can even imagine, especially the leads.  Rutland, Drew, Sarah and Justin have all just blown me away with how talented they are, and how much work they put in.”

Cook wants Cullman to come out and see, not just a good show for a high school, but a good show, period.