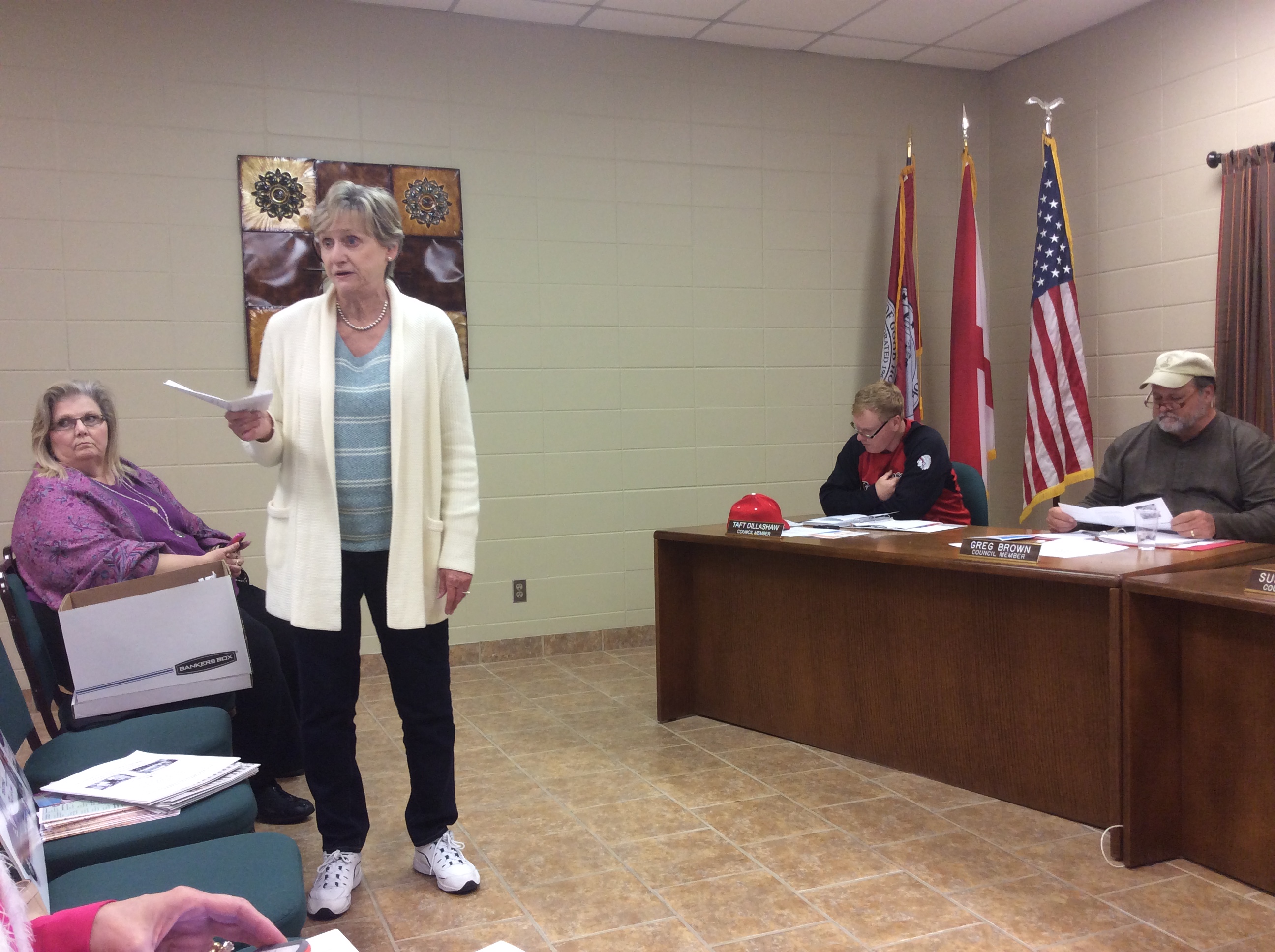 GOOD HOPE – The Good Hope City Council closed the month of February on a high note with several positive council reports and a visit from the First Source for Women pregnancy center, which has been visiting town councils throughout the county to spread the word about its services. Councilman Greg Brown delivered the opening prayer, and roll call showed all but one member present (Susan Eller was called away on a last-minute business trip). The council turned the meeting over to the visitors, and First Source's Executive Director Catherine Bethell took the floor.

Bethell's main goal was to educate as many people as possible about the organization's services and benefits, since many people are still unaware that these options are available. She talked about the parenting classes First Source provides, as well as the baby supplies (diapers, onesies, etc.) that parents can buy with play money earned through completing classwork. She also provided the council members with a referral pamphlet to show how many other organizations and specialists they work with in order to get women the help they need, whether it be for pregnancy, insurance, food and furniture, substance abuse, domestic abuse, help paying bills, or just general support. Her last point was to talk a bit about the new mobile medical unit, which will be rolling out in September. The unit will travel Cullman County providing healthcare to women who are unable to come to the Hanceville office, and will have a QR code that people can scan to see where the unit will be the next day.

After Bethell's presentation, city deputy Chad Chapman gave his report about a string of gas thefts (three in the past week) from a nearby station. He also talked about several garbage bags found strewn about near the church dumpster, and said that some identification had been found in one of the bags. He confronted the man whose name was found, but the man in turn implicated the cleanup crew, saying that things had been going missing off his desk and that they must have thrown them away before carelessly disposing of the bags. Most members of the council laughed at that and said that he came up with a very convenient excuse.

After the visitors said their parts, the council moved to approve the minutes from the last meeting, then continued to the council members' reports. John Harris said little about the bank balances since everyone was given a copy of their own, and Maxie Jones said that the Beech Grove Road bridge was supposed to be open by Feb. 27; however, the rain prevented work from being done, so the opening has been delayed further. He also estimated the time that the Cabin Fever Beverages project on Highway 69 would take might last until early September, but it's unlikely that they would use up the full amount.

Eller was absent, but her representative said that everything was going well for the sewers. Greg Brown read from a pamphlet about a breakfast that Good Hope High School is hosting in appreciation of the council members. The breakfast will be in the teachers' lounge on March 6 at 7:30 a.m. Lastly, Taft Dillashaw happily reported a large turnout for baseball signups, drawing attention to the large crowd of people downstairs who were trying on uniforms. He also said that the new field maintenance machine should be in later this week. Before officially moving on to the ordinances, Mayor Jerry Bartlett announced that opening bids for the new Mower Max machine would take place next Wednesday.

The final order of business was Ordinance No. 002-2017, regarding the annexation of Sonya Stafford's property into the city. A motion had been made and seconded to approve before city attorney Ria Nichols asked if suspending of rules would be necessary even though this issue had been talked about previously. The council quickly made the decision to suspend the rules in order to vote, and unanimously approved the property annexation. The council voted to adjourn, and the meeting ended.

After the meeting, Bethell mentioned that First Source is always looking for volunteers and people to help the organization. Receptionists, administrative assistants and nurse sonographers are needed, and training will be provided. Other immediate needs include monthly donors, baby supplies (diapers, clothes, bottles, cribs, medicines, wipes, etc.) and office supplies.

The Good Hope City Council meets on the second and fourth Mondays of each month at 6:30 p.m. at Good Hope City Hall. The public is welcome to attend.