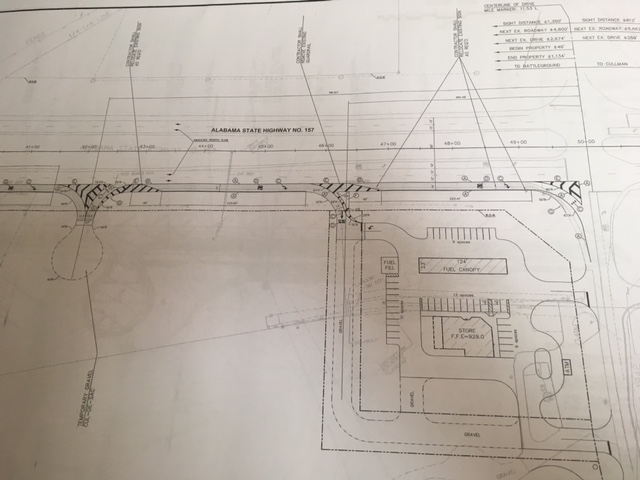 Plans for a new convenience store on the south side of AL 157 in West Point.

WEST POINT – On Monday evening, the West Point Town Council once again addressed the upcoming extended deceleration/turn lane on Alabama Highway 157.  The lane is planned for the eastbound side of the highway as it approaches the County Road 1242 intersection where Jack’s is located.

Across from Jack’s on the south side of 157, the owner of Dale's convenience store and gas station in Hanceville will build a similar new store in West Point.  On the west side of that site, along 157, is a second site to be developed as a small shopping center.  The construction of the deceleration/turn lane will allow safer access to these businesses, and to County Road 1242.

According to Mayor Kenneth Kilgo, the entire project is expected to cost $200,000.  At a recent meeting with representatives from the Alabama Department of Transportation (ALDOT) in Montgomery, Kilgo received a commitment from the department for $100,000- half the estimated amount.  Other sources, including the Cullman County Industrial Development Board, have committed $60,000.  Any costs not otherwise covered will be the responsibility of the developer.

The Cullman County Road Department will grade and improve the bed for the lane as an in-kind service, and ALDOT funds will pay for the paving.

Kilgo was careful to point out that West Point, the road department and ALDOT will be responsible for improvements along the road only.  All development off the road, including entry and exit lanes for the businesses, will be paid for by the developer.

In other business, the council voted to split the cost of an LED billboard/marquee in front of the new fire station.  Tim Martin, of the West Point Fire Department, explained that the sign will be 53 by 63 inches, two-sided, and will cost an estimated $29,425.  The town and fire department will each pay half.  The sign will be used for town business: advertising municipal events, weather alerts, road conditions, etc.  At present, no plans are in place to allow private or commercial advertising.

The council also voted to levy a fine for dumping in the town's sewer system.  Noting that two out-of-town trucks had recently been spotted trying to dump grease and sewage down manholes, the council chose to assign a $2,000 fine for each offense.  The amount was determined by Town Attorney Dan Willingham to be the highest amount that could be charged for a misdemeanor offense.

The West Point Town Council meets on the third Monday of each month at 6 p.m.  The public is invited to attend.