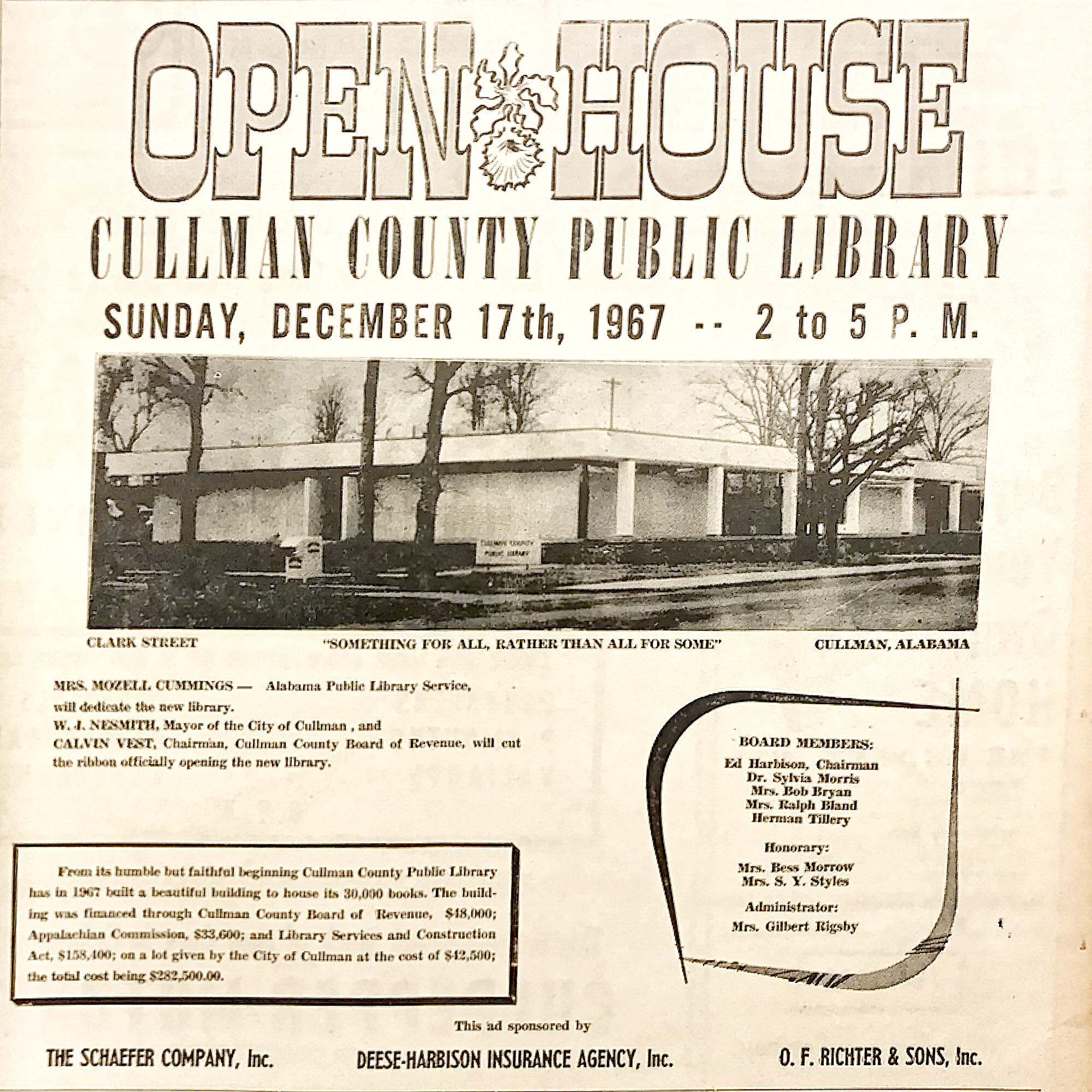 CULLMAN – 1945- 1970 was an era of big changes for Cullman’s library. In addition to increasing their collections, the library finally got its first board in 1946.  This was partly due to the efforts of Bess Morrow, who had also helped to establish the Stiefelmeyer library. Morrow- then a member of Cullman’s Business and Professional Women’s Club (BPW) – worked with others from the BPW to raise money for the library and lobby to keep it open. As a result, Cullman’s County Board of Revenue appointed the first public library board in 1946. The board still exists today.

In 1952, after two years of lobbying from the Home Demonstration Club, bookmobile service was added to provide books to more rural areas of Cullman County. On Dec. 2, 1952, the bookmobile made its first run, and continued to do so until 1981.  The bookmobile was sponsored by the newly formed Cullman- Winston Regional Library Board, whose creation was supported by Carl Elliott, Cullman’s representative to the House of Representatives.  The partnership between Cullman and Winston County only lasted until 1958, but the Cullman library retained its bookmobile service until 1981.

In addition to providing books, both the bookmobile and library played roles in the passage of two important bills concerning public libraries.  Representative Elliott used the success of the bookmobile, as well as data collected on both the library and bookmobile’s usage, to encourage the passage of the Library Services Act in 1956, followed by the Library Services and Construction Act in 1964. Both bills were the first to fund public libraries, and later helped fund Cullman’s new building in 1967, as well as training for several of Cullman’s librarians.  Carl Elliott was remembered in 2006 by the Cullman County Public Library System, with the naming of a new bookmobile as the C.C.V. Carl Elliott.

The library also moved at least twice more- to the basement of the Fuller Building at some point after 1935, and again in 1964 to Cullman’s former city hall building (what is now known as the City Hall Annex).    The move to the city hall building came after failed efforts to gain funding for a new library near the Cullman courthouse.

The bookmobile was not the last first for the library during this period. In 1963, the library gained its first full-time administrator, Marguerite Rigsby, who was instrumental in growing the library’s book collection and staff, as well as obtaining a new, more permanent home for the library.  Morrow- who was still involved with the library, including serving as a member of its board- supported the efforts of Rigsby. Their work paid off in 1966, when a new library building was approved by city officials. The land was donated by the City of Cullman, and the building was funded by the Cullman County Board of Revenue, the Library Services and Construction Act and the Appalachian Regional Commission. Construction began in March of 1967, and lasted for nine months. The open house and ribbon cutting for the new library were held on Dec. 17, 1967, and the library opened the following day. The location was 200 Clark St. NE, and has been the library’s home ever since.  At the time of the opening, the library’s collection contained 30,000 books.

1967 edition of the Cullman Tribune