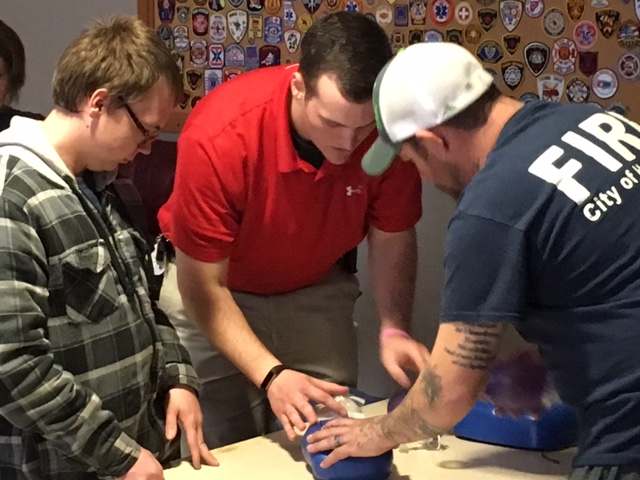 HANCEVILLE – The Hanceville Fire Department (HFD) recently started a new class for volunteer firefighters seeking state certification.  The classes meet every Tuesday and Thursday evening, and one Saturday per month.  They have begun with two weeks of basic medical response training, then will move into three blocks of firefighter courses and one course on hazardous materials, each of which will last four weeks.  The entire program will be completed in May.

Students are currently taking a short course in emergency medical procedures under instructor Ryan Whisenhunt from the Gold Ridge Volunteer Fire Department. The course will give them American Heart Association CPR certification, and familiarize them with numerous aspects of the medical functions of a fire department.

HFD Lt. Jacob Hudson, who is in charge of the overall course, shared, "The prerequisite for the fire part of the class is what used to be called First Responder.  It's now called Emergency Care Provider: a basic first aid, CPR, bleeding control and shock management course.  That's what the students are taking right now.  They learn about blood-borne pathogens, about OSHA (Occupational Safety and Health Administration), about HIPPA (Health Information Patient Privacy Act).  They learn about shock management, bleeding control and how to do CPR."

The Emergency Care Provider course has 16 enrolled students representing five area departments: Hanceville, Bremen, Garden City, West Point and Dallas-Selfville from Blount County.  After the conclusion of this first course, they will be joined by trainees from Gold Ridge who have already completed the medical prerequisite, to proceed into what is commonly known as "160" firefighter training.

According to the Alabama Fire College, 160 (for the number of hours of training) training is delivered in four 40-hour blocks.  Specific topic lists were taken from the college's website.

BLOCK FOUR: Hazardous Materials Awareness and Operations. This course meets the requirements of the mandatory Awareness/Operational training in hazardous materials required by Title III – Emergency Planning and Community Right-to-Know Act of 1986 and NFPA 472, Standard on Professional Competence of Responders to Hazardous Materials Incidents.

Once they complete the training, participants will have a broad-based understanding of basic firefighting and emergency medical operations, and will be certified as volunteer firefighters.  From there, graduates can seek certification to operate fire trucks and other vehicles, apply for officer training, and move from volunteering to pursuing careers in firefighting if they wish.

Said Hudson, "That certification will go with them anywhere in this state, and even some other states.  It will also set them up where they can go and take higher-tiered courses such as Firefighter II, taking everything they just learned as a firefighter and teaching them to apply those same roles as more of a leader in the fire service."

Volunteer firefighter certification is not an easy thing.  Trainees will spend many hours in the classroom, and will be tested on everything they learn, often with little preparation time.  They will get hands-on with personal gear and department equipment, and will have to perform demanding physical tasks while burdened with heavy and cumbersome personal protective equipment (coveralls, jackets, helmets, air tanks, etc.).

For those who make it, and for their departments, the outcome is well worth the effort.  Departments with certified firefighters are more capable of doing their jobs, and not just the firefighters say so.  Insurance companies think so, too; communities with sufficient numbers of certified firefighters see lower homeowner insurance rates.  The training can even have personal benefits for graduates.