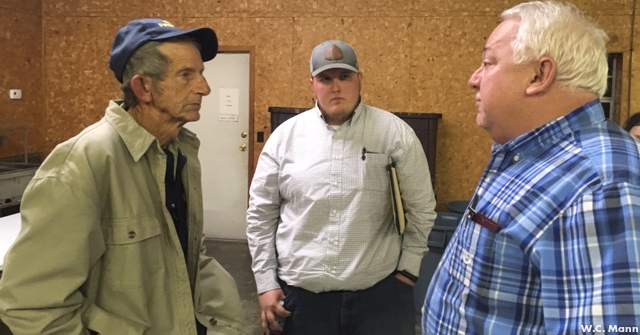 Things did not go well.  In the days following the board meeting, a rapid breakdown in talks led to three personnel transfers to another department and two arrests by the Cullman County Sheriff's Office.

Of the resignees, Reynolds, Cody Bice and Seth Brock joined the Logan VFD.  Ron Robbins decided to stay with the BVFD, at least until the board holds elections; he plans to run for chief. The other resignees are currently inactive.

After the Saturday meeting, another was planned for the evening of Monday, Dec. 5 at BVFD station no. 1.  After a confrontation between resignee Cody Bice and board member Alan Edwards outside the station that evening, Bice signed warrants against Edwards and firefighter Earnest "Butch" Campbell.  The warrant against Campbell was filed for a separate earlier incident that contributed to the mass resignation.  According to the Cullman County Sheriff's Office, Edwards and Campbell turned themselves in at the Sheriff's office on Wednesday Dec. 7, where they were arrested and charged with harassment.

According to Golden, the Association has had no part in Bethsadia events, and no contact with the involved parties since the board meeting on Dec. 1.

Carden and Reynolds had much more to say.  Their statements and opinions are presented separately below.

According to Carden, "Everything couldn't be better" at the BVFD.

The department has eight new firefighters signed up, and possibly a ninth; bringing the total personnel count to 15 or 16.  In January, Carden says he plans to bring in an instructor to offer training to all the new firefighters to get them certified.  Training opportunities will also be given for work toward EMT certification.  (Note: As of the Dec. 1 board meeting, the BFVD had four remaining certified firefighters and no EMTs.)

Of the resigned firefighters and negotiations, Carden said, "They're gone.  They didn't want to work out anything.  Some of them didn't want to take orders."

(Carden did not mention the personnel arrests or the incident that led up to them.)

Reynolds says that he and the other resignees were prepared to work things out, but Carden would not budge on a major point of their complaint.

He said, "We were ready to go back to work Saturday afternoon if he got rid of the two convicted felons who are causing the problems, but he decided not to do it."

Reynolds talked about the incident that led to the arrests, saying that after the Saturday meeting a Monday evening meeting was scheduled.  When they arrived, Carden was away from the station on a call.  Instead, the group was met by Edwards, who approached and zeroed in on Bice, threatening to "stomp his ass."

After that, Reynolds and two other resignees made the decision to leave Bethsadia and join the Logan VFD.  He says the move was a good one.

"They welcomed us on board.  With my medical background, Cody's certified, Seth's certified and a certified instructor.  Logan has a pretty full portfolio."

He says that the he and the other resignees support Robbins' decision to return to Bethsadia and run for chief.  Even if the BVFD elects a new chief (Reynolds expressed some doubt that the board will actually hold an election), he has doubts about the idea of a return to that department.

The next meeting of the Bethsadia VFD board will be on Jan. 5 at 7 p.m. at station no. 1, located at 454 County Road 804 in the Bethsadia community.